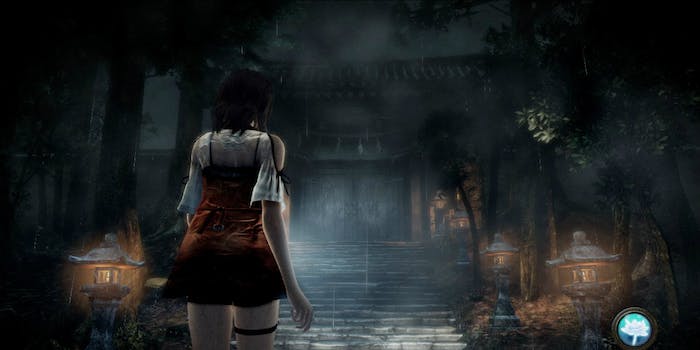 The newest entry in the Fatal Frame franchise absolutely passes muster for fans of the series.

Imagine a movie like The Ring with an extremely long run time and an oppressively depressing plot and you have an idea what it’s like to play Fatal Frame: Maiden of Black Water.

Where Fatal Frame diverges from its survival horror cousins is its extensive use of the first-person perspective through a item in the game called a Camera Obscura, an occult device that allows the user to see into the supernatural world to combat ghosts that invade our plane of existence.

Maiden of Black Water takes place on Mt. Hikami in Japan. The mountain is a former tourist destination and spiritual retreat that went into decline following a landslide that cut off paths to the shrine at the top of the mountain and buried large portions of an inn where tourists used to stay.

Mt. Hikami’s identity as a spiritual retreat was tied to the rivers and waterfalls that drew from a lake at the mountain’s summit and the belief that water represented the spirit of nature—a spirit that the dying sought to return to. Following the disastrous landslide, Mt. Hikami became known as a place where people go to commit suicide, and where spirits lure people to their doom.

Maiden of Black Water aims more for the creepiness of modern Japanese horror films than the jump scares and gore of the Resident Evil series, and the psychological terror of the Silent Hill games.  What adds to Maiden of Black Water’s creep factor is that Mt. Hikami is clearly inspired by a real place.

Aokigahara, also known as the Suicide Forest, is a dense woodland located at the base of Mt. Fuji in Japan. Hundreds of people have killed themselves in Aokigahara over the years. Aokigahara is predictably tied to stories of ghosts and spirits and demons.

And this accurately describes Mt. Hikami in Maiden of Black Water, a place where certain parts of the forest have been declared forbidden by the police, and stories of Shrine Maidens luring people to their deaths are commonplace. 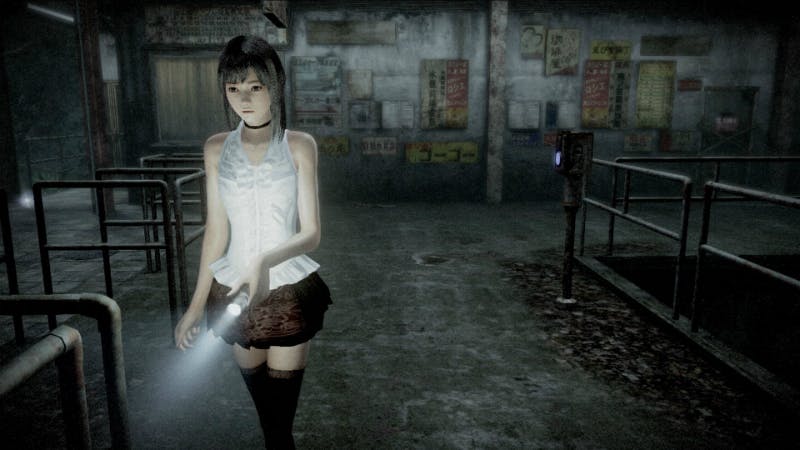 Maiden of Black Water begins with a psychic investigation carried out by Hisoka Kurosawa, the owner of an antique shop in the town at the base of Mt. Hikami and a practitioner of “shadow reading”—the ability to read traces of objects or people gone missing.

Kurosawa has been hired by a writer named Ren Hojo, to locate a missing book of postmortem photography, lost within an inn half-buried by the landslide that destroyed the tourist trade on the mountain.

Postmortem photography, taking pictures of the dead in repose, is a real practice that existed in the 19th century. Parents might take a postmortem photograph of a child whose photo had never been taken while the child was alive, so they had something to remember the child by. That this is a real thing adds to the creepiness.

Hisoka brings her student, Yuri Kozukata, along with her to find the book of postmortem photographs, which Yuri locates using a Camera Obscura. One of Fatal Frame’s chief mechanics is the ability to locate objects that exist within the spirit world and to pull them into the real world by tilting the Camera Obscura, framing the shot perfectly, and taking the picture. The mechanic is used to locate notes that give clues about the story and keys that will unlock doors, among other things.

Yuri also learns how to take pictures of ghosts. Whenever a ghost appears, if you are quick enough with the Camera Obscura, you can take a picture and earn points. You may either use the Wii U’s GamePad as the virtual camera, snapping into Camera mode from the default third-person view and literally holding the GamePad in front of you as if you were looking through a camera’s viewfinder, or you can snap into Camera mode and use the analog sticks to aim the camera. 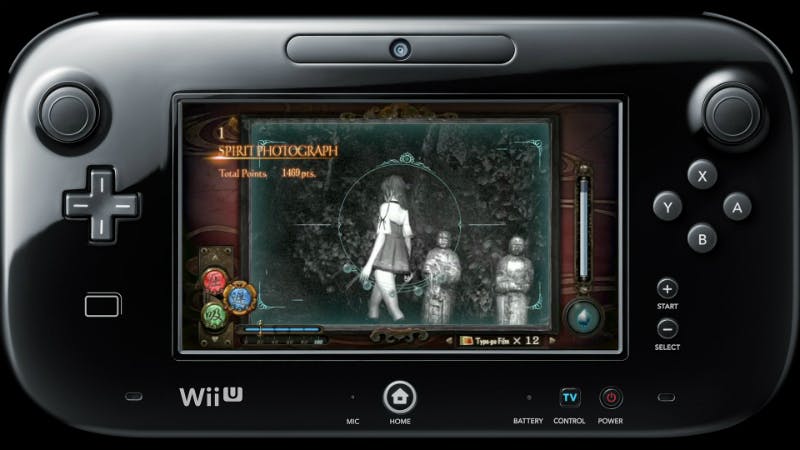 The benefit of using the GamePad is that it turns into an augmented reality device, where you can turn in a full circle and still see the game world on the GamePad’s screen. The GamePad is not light, however. You’re likely to have it resting in your lap while playing the game, so getting the GamePad up into position, framing the shot, and taking a picture of the ghost isn’t easy, versus just using the analog sticks when you only have a second or two to frame and take the shot.

Ren Hojo hired Hisoka Kurosawa to find the book of postmortem photography because he’s looking for clues to unravel a recurring nightmare about a secret ceremony held on the mountain and a little boy killing a little girl while a crowd of onlookers stand and watch.

Ren isn’t sure whether he is recalling a repressed memory, or picking up on the memories of someone else. Like Yuri Kozukata, Ren also has the ability to touch the spirit world via shadow reading, and he has his own Camera Obscura, purchased from Yuri’s teacher.

Yuri inherits her Camera Obscura from Hisoka, who vanishes during a missing persons investigation on Mt. Hikami. Yuri scales the mountain to try and find her teacher, discovers Hisoka’s Camera Obscura lying in a pool of water, and is immediately attacked by spirits when she picks the Camera up, She has to defend herself using the Camera’s ability to exorcise ghosts. 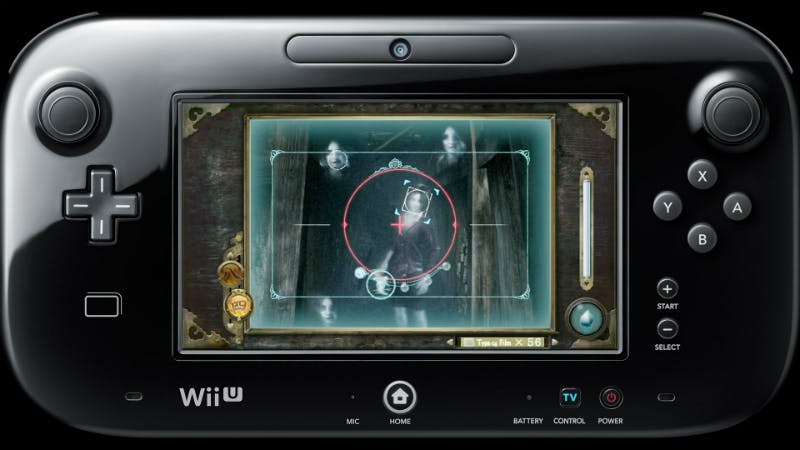 To destroy ghosts, you take pictures of them. The first picture of a ghost shakes loose pieces of its spirit energy, which then rotate around the ghost. To do the most damage to the ghost in successive photos, you have to frame the ghost together with as many of those spirit energy pieces as you can.

Where you find weapons and ammunition in Resident Evil and Silent Hill, you find different types of film and attachments for your Camera Obscura in Fatal Frame. The lowest grades of film do less damage and take longer to load between photos. The highest grades are sanctified to be more effective at ghost exorcism and load into the camera more quickly.

Lenses can allow you to automatically stagger ghosts when you take photos, or can regenerate health for your character based on how much damage you do with each shot. During some of the more harrowing fights, you may find yourself popping into your inventory menus multiple times to adjust what kind of film and lens you’re using.

You may also use the points you earn during each level to upgrade the range at which the Camera can focus on and attack ghosts, the amount of damage each photo does, and the speed at which you can load film.

Armed with the Camera Obscura she inherits from Hisoka, Yuri continues to investigate the missing persons case on Mt. Hikami, while Ren continues his own investigation into the origin of the mysterious Shrine Maidens who lure victims to their deaths and who are deeply tied into the history and folklore of the mountain. The story that follows is ploddingly slow. 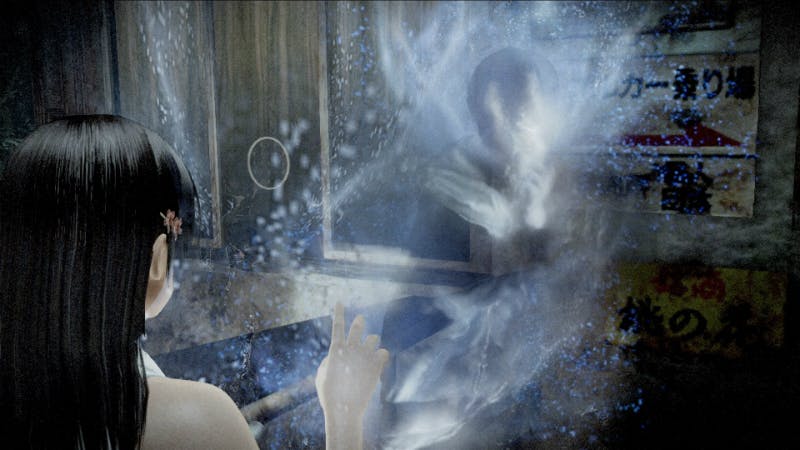 Maiden of Black Water is about suspense, which is served by a slow narrative pace, but the game absolutely crawls forward at parts, and certain mechanics started to weigh on me.

Every time you try to pick up something up, you invite an attack, and so every attempt to pick something up happens slowly to build suspense as you wonder whether you are going to be attacked or not.

Even if a ghost does grabs you, the damage is minimal. The Healing Herbs you pick up within each level are plentiful, and you can also use your points to purchase items before the beginning of each chapter, so you’re likely never going to run out of Herbs.

The “ghost grabs” while picking up objects are nothing more than an annoyance, and a few hours into the game I wanted my character to just pick up the damned objects and move on.

Your character moves slowly. Running doesn’t help, because very often you are tracking someone’s footsteps during a level—a missing person, for example—and have to stop and use your shadow reading power to pick up their “trace.”

The trace is a ghostly outline of a person that appears in front of you, and shows you what direction the person you are tracking walked in. Running doesn’t help the overall pace of getting around within a level because you have to stop every so often to pick up the trace again.

Every chapter begins and ends with a summation of the story up until that point. There are plenty of lingering shots of characters’ expressions as they react to events. Even what pass as the most action-packed, eventful moments of Maiden of Black Water feel like they unravel at a snail’s pace compared to Resident Evil and Silent Hill games. 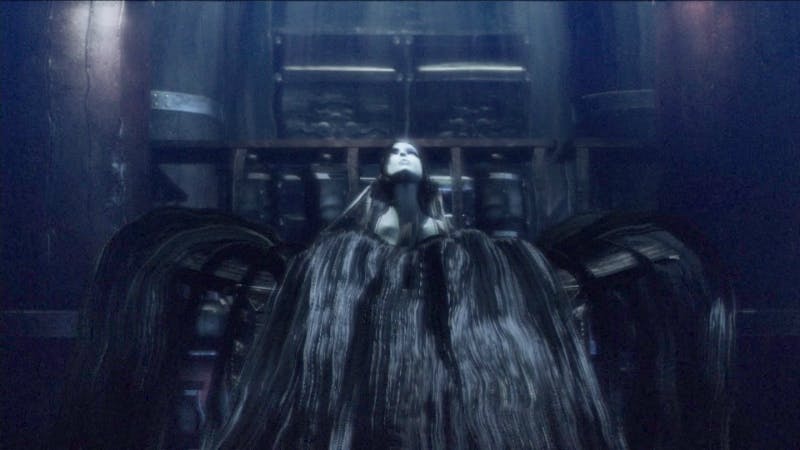 The story in Maiden of Black Water is extremely depressing. In the earlier chapters it felt like every fifth sentence out of someone’s mouth was about suicide. This is entirely appropriate for a game inspired by Aokigahara, but it quickly becomes downright oppressive.

You will see characters kill themselves on camera, or make attempts on their own lives, or remember surviving group suicide attempts. The theme is so pervasive that I might even slap a trigger warning on this game for anyone who’s suffered real-world trauma related to suicide.

I found it better to switch to Japanese dialogue with English subtitles, rather than to go with English dialogue, on two counts. The dry reads of the English-speaking actors break the atmosphere that, while not enjoyable, is integral to the game. It was also tough to hear the dialog between characters while I was playing a level, unless I closely faced the character who was speaking.

That’s realistic, of course, but when a game moves as slowly as Maiden of Black Water, even the most ardent survival-horror fan might prefer to keep moving, rather than stopping every time there’s incidental dialog between characters. There is so much dead space in the game it’s better to have the subtitles on and be able to keep moving without missing any of the dialog.

There’s a third recurring Camera Obscura-based game mechanic besides fighting ghosts and bringing objects from the spirit realm into the real world. Sometimes to break the seal that’s holding a door closed, for example, you have to take a picture with the Camera Obscura that matches a photograph already in your possession.

I got stuck on these “matching photograph” puzzles every single time. They never made sense to me. I eventually arrived at just switching into Camera mode, and circumspectly scanning entire environments looking for a point on which I could focus—a box appears around any object you can focus the frame on—and then twisting the GamePad around until I heard the chime that indicated I had the camera in the correct position.

Survival horror games are a venerable genre that hail back to the days of the PlayStation 2. Video games as a whole have sped up significantly since then. Maiden of Black Water is also very plain graphically, and looks more like a PlayStation 3 or Xbox 360 game than something you’d expect from modern consoles.

Disclosure: Our copy of Fatal Frame: Maiden of Black Water on Wii U was provided courtesy of Nintendo.