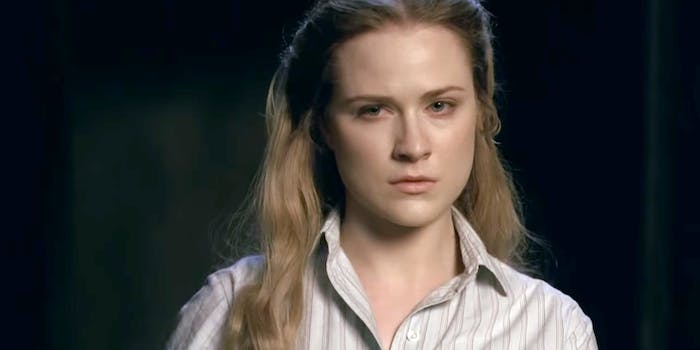 Fan theories became part of shows like 'Westworld' and 'Game of Thrones,' and there's no going back.

After watching a few episodes of Westworld, I can’t shake off the feeling that everyone’s a host.

It’s a concept that the new HBO drama introduces as early as the pilot in the form of Teddy (James Marsden). At the beginning of the episode he rolls into Westworld on the train and gets swept up into helping the host Dolores (Evan Rachel Wood); they even have a connection. Teddy succeeds in protecting Dolores from bad men until the Man in Black arrives on the scene. As we see shot after shot hit the Man in Black without any effect, we learn why courtesy of a voiceover from Bernard (Jeffrey Wright): Hosts cannot harm the guests. And so audiences learned the answer to the show’s first mystery—Teddy is a host.

Now that Westworld has finished airing its first season, the answers and threads to many of the questions I have (and will probably soon have) are already out there—from hosts hiding unaware and in plain sight to the idea of multiple timelines, clones, and if Westworld takes place on another planet. I’ve been spoiled about what happens on Westworld, thanks to fan theories, but so far that hasn’t made it any less enjoyable.

Westworld is the culmination of the internet’s love for a good mystery going beyond the webpage. It’s now part of the very fabric of a show.

We saw hints of this a decade ago with Lost, a show that Westworld is often compared to, which provided hints and teases of a greater mystery alongside its complex and emotional character narrative. You could watch Lost, sure, but if you wanted to explore you could read into what Lost name-dropped that week, or the connections between each of the Dharma Initiative stations, via web recaps and Entertainment Weekly’s weekly deep dives.

Lost spawned numerous series that tried to capture its message board-driven fandom, and 10 years later we’re following its blueprint: read the preview, watch the episode, plunge into the internet’s analysis.

It’s in Game of Thrones, a show based off a 20-year-old book series that got millions hooked and offered new eyes on a fandom caught in a years-long hiatus. It’s in Mr. Robot, which shows, through largely accurate depictions of hacking and an unreliable narrator, that everything is not as it seems. It’s allowed older series such as Harry Potter to thrive because there are still nuggets for fans to turn over within the text. It’s encouraged a new generation of Star Wars fans.

These theories, whether we like them or not, hit the mainstream in 2016.

They’re discussed in red carpet interviews and on talk shows, brought up to showrunners in postmortem interviews, and even talked about among a show’s cast members while they’re filming. One fan theory—the idea that Jon Snow would be brought back after his death—dominated geek TV headlines for nearly a year.

TV reporters often tap into theories when they write their recaps because they enrich what we’ve already seen, and podcasts (sometimes run by the reporters themselves) further tap into that. Is it too much diving into a show? Of course it is—but that’s what readers want. And next year, as Game of Thrones starts nearing its end and we have a new Star Wars movie to look forward to, we won’t see their momentum slowing down.

On the other hand, while theories have been around for decades, they’re starting to face pushback. More than one article has claimed that fan theories have ruined TV because it’s turned a show’s mysteries into a guessing game with inevitable or stretched-out conclusions. Fans guessed the big twist of Mr. Robot’s second season one episode in, which made some of them impatient until the reveal that Elliot Alderson was in prison finally came to pass; fans likewise nailed down enough of Game of Thrones’ season 6 mysteries as it started to wrap up that it’s been called “fan service.”

We may be seeing a surge of shows that feel like they’re created specifically for the internet, but those shows need something else to rope in the viewers who just want to, you know, unwind and watch TV. We might have seen all of those twists and theories play out online prior to air, but there were plenty of people who thought Jon Snow was actually dead. Those teases and puzzles, like Westworld’s tie-in website, are there for those who want to solve them. Good TV needs to work in both spaces.

And for all of its faults, one of Lost’s most triumphant moments wasn’t any of the puzzle pieces coming together or finally learning about Jacob and his own Man in Black or the true meaning of the Numbers. It wasn’t the reveal of flash forwards or the Hatch. It was a character moment: Desmond Hume and Penny Widmore’s Christmas phone call in “The Constant.”

So yeah, I know that Bernard is a host and Westworld is showing its audience two entirely different narratives. But while I’ve already discovered the answers, I still don’t know the how of it—and getting there’s going to be the real fun. And once I finish, I know where I’ll be headed next; after all, that’s one big hiatus to theorize.