HBO's 'Westworld' offers big-budget sci-fi with an impressive cast, but it has some serious issues with women.

The common threads between Westworld and Jurassic Park are obvious, from the theme park setting to the motif of humans trying to play god and suffering the consequences. But where the appeal of a Jurassic Park vacation was easy to understand (who doesn’t love dinosaurs?) Westworld invites different questions. Namely, what kind of person pays money to visit Cowboy Murderland?

Half of Westworld‘s main characters are the lifelike android “hosts” of the park, but the Uncanny Valley is far from the most disturbing theme of the show. Populated by gunslingers, sex workers and saloon hustlers, the Westworld park is a luxury LARP destination for people who want to murder, rape, and pillage without consequences.

Jonathan Nolan’s adaptation of the Michael Crichton novel is an intriguing follow-up to his work on Person of Interest, another (very different) show about the rise of artificial intelligence. Positioned to replace Game of Thrones in HBO’s big-budget drama slot, Westworld has more in common with Joss Whedon‘s Dollhouse, which followed a group of memory-wiped “dolls” who were implanted with temporary skills and memories for the benefit of wealthy clients.

Westworld’s hosts are animatronic mannequins, programmed to follow familiar Wild West storylines unless one of the park’s human visitors interrupts. They’re indistinguishable from real people, except for the fact that they reset to their original state at the end of each day. With a premise like that, it’s not hard to predict what happens next. Some of the hosts begin to malfunction, remembering things beyond the 24-hour loop of their programmed storylines.

The show’s heart is Dolores (Evan Rachel Wood), a sweet young host whose pre-programmed love for her old flame Teddy (James Marsden) is more sympathetic than the cynicism of Westworld’s human engineers, or the bloodthirstiness of the park’s visitors. Behind the scenes, programmer Bernard Lowe (The Hunger Games‘ Jeffrey Wright) and his employees strip the hosts naked, inspecting them with scientific detachment as a reminder that no, these aren’t real people. This relationship creates a simple but compelling conflict: Should we be afraid of those creepily lifelike androids, or should we root for their escape from theme park purgatory?

Westworld offers a entertaining marriage between high-concept science fiction and glossy, expensive human drama. Its main flaw is one it shares with Game of Thrones: gratuitous violence against women. Despite the presence of interesting female characters like Dolores and theme park manager Theresa Cullen (Sidse Babett Knudsen), sexism is built into the basic concept of Westworld. As a quasi-realistic recreation of Wild West adventure tropes, it’s a male fantasy paradise. 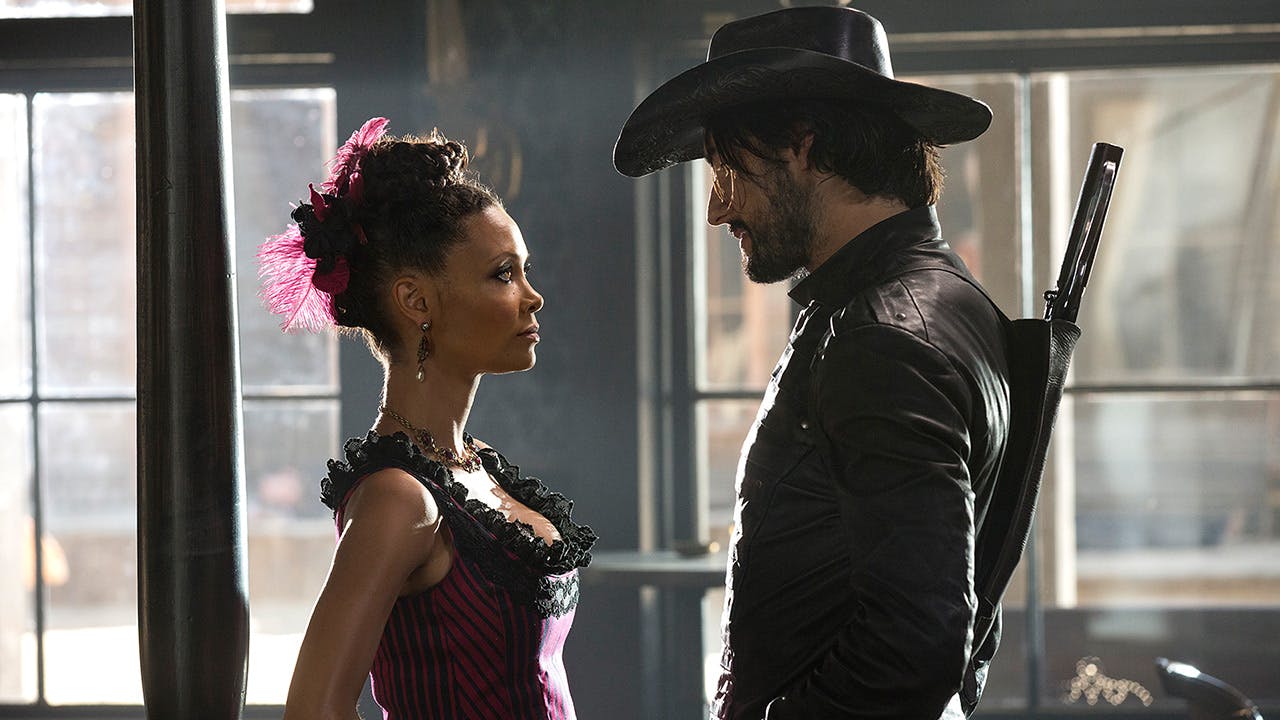 The men of Westworld are grizzled gunslingers and unwashed cowboys, while the female hosts have flawless skin and hair. Dolores is one of the few female hosts who doesn’t work at the saloon brothel, and there’s a strong implication that she gets raped within the first ten minutes of the episode, shortly after someone jokes about raping her mother’s corpse. Later, when a new group of criminals rides into town, one of them threatens to rape one of the saloon girls before getting shot in the head. While the hosts are unable to physically harm human visitors, Westworld hardly seems welcoming to women.

This feels like a rather tangled commentary on how we view shows like Westworld and Game of Thrones ourselves, including the argument that sexual violence is a “realistic” requirement for a dark and adult setting. Westworld is marketed as a realistic experience while being guided by a theme park sensibility, explicitly using sex and violence to entertain its guests.

Some scenes are explicitly critical of the people who visit and operate the park, but the show itself is basically doing the same thing with its HBO rating, featuring bloodthirsty violence and as many topless young women as possible. And while Dolores is a sympathetic protagonist, that sympathy is eked out by seeing her brutalized by an old man, stripped naked by her owners, and repeatedly forced to wake up and relive it all with a smile on her face.

Westworld‘s first episode may sow the seeds for some thought-provoking storytelling about artificial intelligence, but it couldn’t escape the same tired old tropes about violence against women.