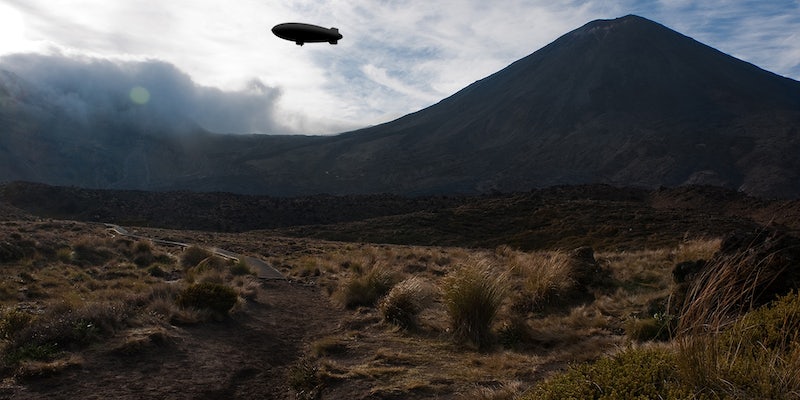 Lord of the Rings fans just won't let this one go.

There’s a corner of Reddit where people gather to spin theories about their favorite television shows, books, and movies. It’s a place where redditors pick apart—at length—whether Disney is building up its princesses for an Avengers-like crossover, or if the world of Pokémon could be a socialist manifesto.

Well in recent weeks, redditor RuafaolGaiscioch wrote a lengthy post to r/FanTheories making a bold claim that might not have been immediately obvious to Led Zeppelin fans: “Stairway to Heaven,” a song released more than 40 years ago, is actually about Aragorn and Arwen, the star-crossed lovers from The Lord of the Rings trilogy.

For one, RuafaolGaiscioch argued, Led Zeppelin band members were known to be big fans of J.R.R. Tolkien. They included references to LOTR in other songs, mainly in “Ramble On,” “The Battle of Evermore,” and “Misty Mountain Hop.” Some have also argued “Over the Hills and Far Away” is a nod to Tolkien’s work as well. So, with that precedence, it’s possible that there may be other hidden references.

The lyrics to “Stairway to Heaven,” once interpreted verse by verse through the lense of LOTR, could tell another story—and one worth reading even if you think the theory is hogwash. The song starts with “There’s a lady who’s sure all that glitters is gold” (similar to a poem about Aragorn in the books), there are references to the West (the far-off place Frodo sailed off to at the end of The Return of the King), and “buying the stairway” could mean Arwen forsaking immortality in order to be with Aragorn, a mortal human.

The redditor continues his explanation with the next lyrics.

There’s a feeling I get when I look to the west,
And my spirit is crying for leaving.
In my thoughts I have seen rings of smoke through the trees,
And the voices of those who stand looking.

At this point, the Elves were going to be departing Middle Earth soon, leaving the world to return back West to Valinor. Her spirit is crying to bring her home, and the other Elves’ do too, but she doesn’t want to leave her love.

Aragorn and Arwen’s story is seen in Peter Jackson’s movie trilogy and mostly told through Appendix A of ROTK. As brief background, Aragorn grew up in elven outpost Rivendell with Elrond and his sons, but he didn’t meet and fall in love with Arwen, Elrond’s daughter, until he was in his 20s; she initially reminded him of Luthien, one-half of another pair of star-crossed lovers and the first elf to become mortal for her human love. It wasn’t until decades later that Arwen returned his love and chose a mortal life. The events of LOTR played out before they were married.

Another redditor suggested that all of Led Zeppelin IV could be about LOTR while another argued that the song isn’t actually about Aragorn and Arwen, but rather it’s about Galadriel.

There walks a lady we all know Who shines white light and wants to show How everything still turns to gold.

Screams at me that the singer of the song is describing Galadriel and her ring Nenya’s ability to maintain her realm’s magic far beyond what it should have been.

Galadriel ruled the elvish realm of Lothlórien with her husband Lord Celeborn for centuries and wore Nenya, one of the three elven rings. She aided the fellowship of the ring, but left on a ship heading west to the Undying Lands, or Valinor, with Frodo, Gandalf, and the other ring-bearers.

But do these theories have any merit? If you take it from Led Zeppelin lead singer Robert Plant, that would be a resounding no. (There are no “backwards messages” in the song, either.) Instead, Plant has said that the song was inspired by writing from Lewis Spence (and Magic Arts In Celtic Britain in particular).

Perhaps the most interesting part of the theory about the LOTR connection to “Stairway to Heaven” is its persistence. People have been speculating about it for decades, despite the band’s denials about its validity.

The Led Zeppelin Mailing List FAQ page (which apparently hasn’t been updated since Sept. 29, 1994) covers that very topic in Question 17. The site states that “there is no apparent link” to any of Tolkien’s work in “Stairway to Heaven.” A 2003 essay from TheOneRing.com (not to be confused with TheOneRing.net) makes it clear that “the band has denied any connection between Stairway to Heaven and LOTR.” It’s also a point made in the book Led Zeppelin FAQ, and it’s referenced in a 2013 Biography.com article about Plant.

A Geocities page, long passed around by Led Zeppelin and Tolkien scholars before Geocities shut down (and now only viewable through the Internet Archive Wayback Machine), didn’t even have a page dedicated to a Tolkien interpretation of “Stairway to Heaven.” Instead, it shut the theory down in bold print.

But all of these roadblocks haven’t stopped fans from linking Led Zeppelin and Tolkien—a match in nerdy musical heaven—together in one of the band’s most famous songs. Given the longevity the LOTR theory of “Stairway to Heaven,” it’s actually an interesting case study in how Internet theorizing has evolved. The same kind of discussions that took place on alt.binaries 20 years ago are now occurring on Reddit.

We did our best sleuthing to track the theory through the labyrinth of the Internet, and while we’re sure this list is incomplete, it offers an interesting exploration of how a single theory—even after it’s debunked—can resurface over and over again.

The old Usenet email lists were absorbed into Google Groups today, but people used to discuss just about anything in these precursors to forums (even Doctor Who and Sherlock showrunner Steven Moffat corresponded in them). In alt.fan.tolkien, the topic of Tolkien and “Stairway to Heaven” comes up a few dozen times from 1992 to 2003. The first mention of the connection comes from Jon Rowlison in a conversation about who’d score a dream version of LOTR. Howard Shore, who eventually scored the films, isn’t mentioned once.

By 1997, fans are debating who exactly is being referenced in the song, but many of the discussions are about which songs were influenced by the books.

“I always read these lines as about someone vain enough to think she understands the world completely, and that it revolves around her,” Dan Lewerenz wrote. “Galadriel hardly fits the picture.”

Even though some of the films in the LOTR trilogy had come out, fans still were still looking to popular music to find Tolkien inspiration. In a discussion about the Led Zeppelin references that spans 11 years, someone with the username “Anarchist” makes the Galadriel connection as “a lady who’s sure all that glitters is gold.” The following commenter—likely someone who’s shot down the “Stairway to Heaven” connection more than once—is rather exasperated about it coming up. It probably isn’t the first time.

The Tolkien/Led Zeppelin talk wasn’t just limited to LOTR-based forums. On the forums of TheForce.net, a Star Wars fansite that’s been around since 1996, one conversation turned to Led Zeppelin in 2002. This time, the focus wasn’t on Galadriel or Aragorn, but rather the hermit that appears on the inside cover of Led Zeppelin IV. Many originally thought it was based on Gandalf, but that theory has been debunked. Instead, the hermit figure was inspired by a figure seen on Tarot cards.

Someone with the username Asliann Niall argued that the entirety of Led Zeppelin IV was a tribute to Tolkien in a 2004 Ancient Worlds post.

“There’s still plenty of sex, drugs and rock ‘n roll in here that have nothing to do with Lord of the Rings,” Niall wrote. “However, it would seem that there is a definite underlying unity of theme that is, what I feel, the source of mysticism for the album and what has led to both its extreme popularity over the years and fascination with the meaning of the music.”

Niall agreed with other theorists that “Stairway to Heaven” was Galadriel’s song, but there was less to draw on than from other songs like “The Battle of Evermore” and “Misty Mountain Hop.”

The comparison popped up on the Barrow-Downs when one poster asked around for modern songs that reminded fellow fans of LOTR.

“[h]ow ‘bout Led Zeppelin’s Stairway to Heaven?” Lachwen responded. “That’s the most gorram Elvish song I’ve ever heard. I mean, consider these lines: There’s a feeling I get when I look to the West / And my spirit is crying for leaving.”

The poster doesn’t say whether the song refers to Galadriel, Aragorn and Arwen, or any other characters, but about a day later, someone brought up Plant’s comments to put an end to that thought.

It’s unclear exactly when this lengthy discussion of “Stairway to Heaven” first popped up on SongFacts, but the first save from the Wayback Machine dates it on or before Nov. 26, 2005. Here, when it came to discussing Led Zeppelin’s most famous hit, nothing was off-limits.

By this point, various people had corroborated that the “lady” in the song was Galadriel, but one commenter identified someone new in the song.

By now, the argument had gone over to the discussion pages of Wikipedia, where editors contended whether “Stairway to Heaven” was inspired by Tolkien. Officially, the claim didn’t have the proper citations and was taken out of the article. It does, however, get a mention in the article for “Works inspired by J. R. R. Tolkien,” although it’s only in passing in the parentheses as “with debate about some parts.”

A post on the blog “Atheist Physics Teacher” acknowledges Plant’s denial of the connection between LOTR and “Stairway to Heaven” but plunges on anyway because “listening to ‘Stairway to Heaven’ always makes me think about Tolkien’s world.”

The writer touches on Galadriel and Gandalf’s smoke pipes (along with Bilbo this time), but brings another character into the mix: Tom Bombadil, who saves the Hobbits from danger early on in the books (but got cut from the films).

“In a tree by the brook, there’s a songbird who sings…”
This line alone would not make me think of LotR, but taken with the others I interpret this to be about Tom Bombadil. Tom is the songbird because he sings everything, and the “tree” is Old Man Willow because that is where the hobbits first encounter Tom.

When you search “Tolkien” and “Stairway to Heaven” in Reddit’s search engine, it only brings up five posts, the earliest only going back to September 2013. Three of the posts didn’t go anywhere, and two were fairly popular in their own subreddits: one by FernandoDan back in May and RuafaolGaiscioch’s post in December. FernandoDan neatly lays out his points in r/tolkienfans.

Is it some of the same stuff rehashed for more than 20 years? Yes, but no matter how many times it’s reiterated, someone will be reading it for the first time.