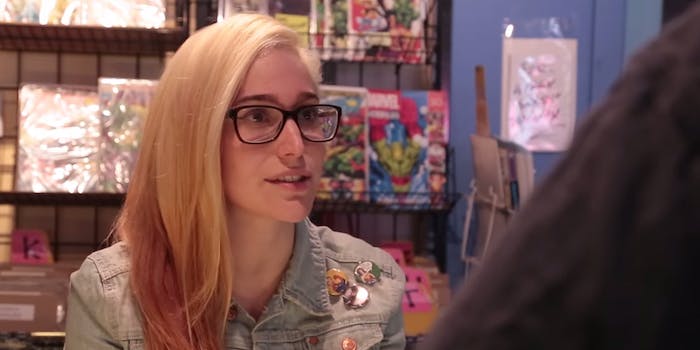 The concept of fake geek girls is now so widespread that the joke needs no explanation.

Imagine a world in which certain people couldn’t go into a comic book store without being mocked and derided due to their gender. A truly ridiculous scenario, we can all agree.

This is one of those satirical videos that proves its point in the comments section. Just within the top page of YouTube comments we already have such gems as “Feminazi” (a fine vintage of YouTube criticism, repeated by several people), and someone pondering, “Does a hot girl that’s into games and anime really get that annoyed about being hit on?” In response to that last question, this video indicates that the answer is yes.

This video is oddly encouraging, in a way. The concept of fake geek girls is now so widespread that the joke needs no explanation: Either you recognize the ridiculousness of this kind of geek culture gatekeeping, or you’re someone who unironically uses the word “feminazi” in a YouTube comment. In that context, it’s pretty clear which side you should be aiming for.