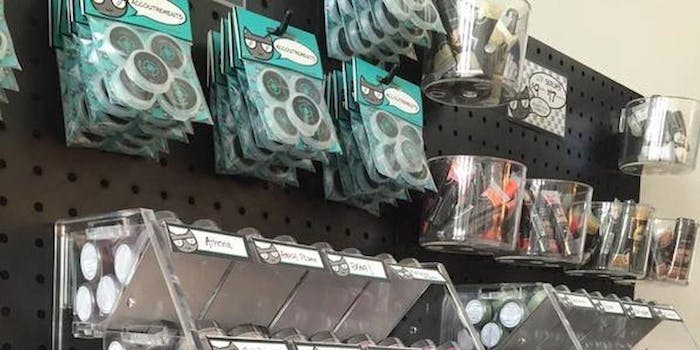 Espionage Cosmetics now has a permanent physical store in addition to their online shop.

People living in Tacoma, Washington, might be feeling more glamorously geeky over the last week. That extra dash of sparkle is the result of Espionage Cosmetics, the popular online geek cosmetics retailer, opening a new brick and mortar store in town to help fashionable geeks get their hands on nerd-inspired makeup and more.

The Geek Boutique opened on Aug. 16 and is the first physical store set up by Espionage Cosmetics. It sells all of Espionage’s products as well as items from eight other geeky retailers including Castle Corsetry, Optimystical Studios, and Throwboy. This means you’ll be able to find a range of geek fashion, accessories, and more in addition to nerd makeup in the specialized boutique. The selection will most likely increase in the future as well, since Espionage appears to be actively looking for more brands to carry in their stores.

In an interview with Fanbolt, Espionage Cosmetics CEO Jaimie Cordero said that they’re “referring to it as ‘a really well-curated Artists’ Alley’ because it’s not just our products.”

The shop looks like an adorable, small boutique with appropriately geeky touches in its decor in the photos that have been shared online. Cordero said in her Fanbolt interview that this will hopefully be the first step to more stores but she wants to see how this goes. Cordero explained that they are planning to have cosplay workshops and use the shop to help produce their nerd makeup subscription box which is currently in closed beta.

Behold the awesomeness that is the (BETA) August Nerd Makeup Subscription Box from @EspionageMakeup ! pic.twitter.com/8RDw0efVfc

Opening a physical store seems like a natural evolution for Espionage Cosmetics. After all, the indie company has successfully funded two Kickstarters, started releasing licensed products, and partnered with fellow geek companies on larger events like the annual Her Universe Fashion Show at San Diego Comic-Con.

Anyone interested in exploring the Geek Boutique in Tacoma can find it at 707 Pacific Ave. The shop is open Wednesday through Friday, 12-7 pm PT.

Photo via The Geek Boutique from Espionage Cosmetics/Facebook