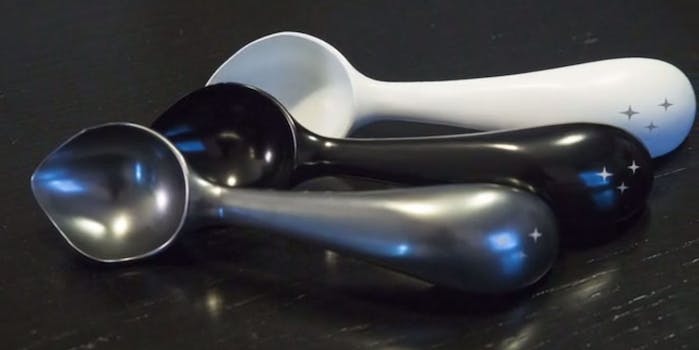 Have you ever tried to satiate a midnight ice cream craving only to discover that your Haagen-Dazs has the un-scoopable consistency of concrete? It probably sent you into a spiral of depression, the only cure for which was ice cream, and we already established that wasn’t happening.

Well, cry no more: We have the scoop on one man who’s making a difference.

Michael Chou, a mechanical and aerospace engineer with the University of California San Diego, has invented the Midnight Scoop. There’s no fancy technology, like a heated surface, to it. Rather, it just comes down to design. The tool is engineered to take the force off the scooper’s weak wrist muscles and instead use the palm. By pushing through the ice cream, you get a clean—and productive—scoop.

Chou has launched a Kickstarter campaign to get the Midnight Scoop into the kitchens of ice cream lovers everywhere. Unsurprisingly, he has soared well over his $17,500 goal. So far, backers have pledged more than $50,000 to bring the ice cream scooper of the future to present day.

Those who chose not to donate to the campaign can probably used their money to instead buy a hammer and chisel. Because that’s the only other way you’re getting that ice cream out of its container.