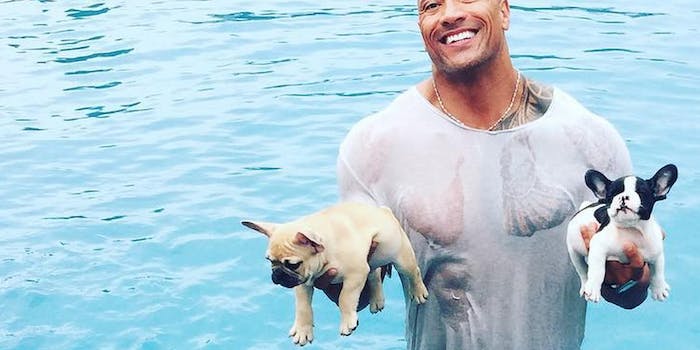 Dwayne Johnson as a superhero: It had to happen eventually.

In a new interview with Total Film, the Rock more or less admits to being cast as Shazam, a DC Comics character whose movie was announced along with a raft of other comic adaptations earlier this year.

This is just one of many movies expected to be publicized at San Diego Comic-Con this week, although Dwayne Johnson technically doesn’t mention Shazam’s name in this interview.

The tease for a Shazam movie is pretty obvious. He mentions discussing various roles with DC over the past two years, finally deciding on a character with “the power of Superman.” Shazam fits that description, as a superhero who can best be described as Superman mixed with the movie Big.

Shazam’s alter-ego is a 12-year-old boy named Billy Batson, who transforms into a muscle-bound hero whenever he says the magic word “Shazam.” Johnson also hints at this catchphrase by saying, “Just say the word,” at the end of the interview.

Honestly, he seems like a great choice for the role. Shazam is a relatively obscure character so DC would need a famous face to helm the movie, and casting Johnson indicates that they’re probably taking a more comedic angle. After all, he’ll basically be playing a 12-year-old in adult disguise, only with superpowers and a cape. Taking that idea too seriously would be a recipe for disaster.