Get ready for Dragon Age: Inquisition with the Keep beta

Keep spinning your Dragon Age story with these many, many choices.

Dragon Age diehards would probably lose their minds if the upcoming Dragon Age: Inquisition didn’t reflect the choices players had made in the previous two games. So BioWare gave those players the Keep.

BioWare wants players to get attached to their characters in games like Mass Effect and Dragon Age. The choices players make with those characters shape their immediate lives, and the larger worlds around them as it ought to be in epic tales. BioWare has therefore made sure to include character save file imports in the second and third Mass Effect games, and the second Dragon Age game, so that the choices made in previous games carried over throughout the series.

Dragon Age: Inquisition is not offering a file save transfer. Players who want to carry over the consequences of their decisions from Origins and Dragon Age II have to generate a World State by using the Keep, and then import that World State file into Inquisition after the game is released.

Unless you have a steel trap memory or just finished Dragon Age: Origins and Dragon Age II within the past few months, however, I can’t imagine how you’re going to answer all the freaking questions the Keep presents you with, to create a World State that accurately reflects all your choices. 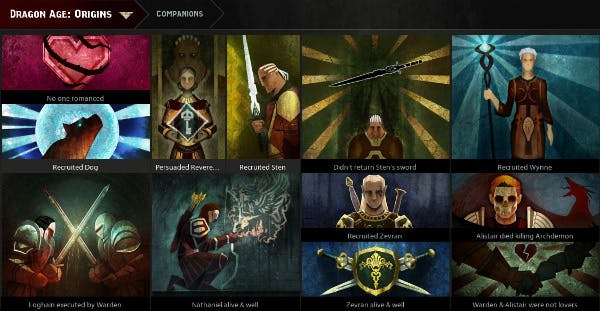 Shortly after you sign in to the Keep and define who your heroes were in Origins and Dragon Age II, the Keep will start playing a cinematic that tells the story of those two games. I recommend quitting out of that cinematic as soon as you can, so that you can make and lock in your previous story choices. That way, when you do watch the cinematic, it will accurately tell your story. Then I recommend brewing a cup of coffee, fetching your copies of Origins and Dragon Age II, and settling down to do some research.

The Keep uses a tool called the Tapestry as the interface by which players indicate their previous choices. The Tapestry breaks down the choices into categories that roughly match headings in the Completed Quest logs and Codexes in Origins and Dragon Age II. And referring back to those sources works pretty well for figuring out the high points of what you did or did not do in the previous two games.

Getting the details, though, was impossible for some of the choices I was asked to make. For instance, in Origins there was prisoner I met in the city of Ostagar. I apparently had the choice as to whether or not to feed him. My quest log shows that I fed him. Cool.

There were also several different ways I could have fed him, however. I could have bought the food, or stolen it, or even given the prisoner the lunch of the guard standing in front of the prisoner’s cage. The Tapestry lets me choose between all those options. How the hell am I supposed to remember where the food came from, if my Completed Quest logs and Codex in Origins don’t tell me?

The Tapestry asked me about the fate of a character in Origins whose name I didn’t recognize. After combing through the Completed Quest logs and Codex in my Origins save file for 15 minutes, I finally hit the Dragon Age Wiki and discovered that the character in question was not from Origins, actually, but from the Dragon Age: Awakenings expansion. No wonder I had no idea who the hell this character was. I’d never met him before. I didn’t play Awakenings!

The Keep, to be fair, is still in beta, and BioWare is really good about responding to fan feedback. So I suggest that everyone offer BioWare the following suggestion: “Tell us where to look for the answers to the questions you’re asking us.” The developers at BioWare could probably provide those references off the top of their heads, and the information would make the Tapestry a lot easier to use.

I only make the suggestion because the Tapestry is absolutely worth taking the time to complete, if you really care about the story you’ve been shaping in Dragon Age. Once you’ve finished making and locking in your choices, and watch the cinematic that you quit out of shortly after the Keep loaded up, you’ll be treated to an awesome synopsis of the previous two games. It will spark your memory to recall old adventures that you (hopefully) enjoyed, and hence get you plenty psyched for Inquisition.

Dragon Age: Inquisition is being released for the PC, PlayStation 3, PlayStation 4, Xbox 360, and Xbox One on Nov. 18.