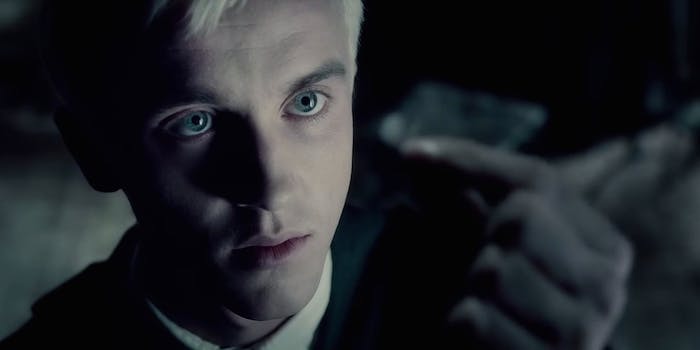 It's a holiday gift for all of us.

On the 11th day of Christmas, J.K. Rowling gave us what we’ve all been waiting for: more intel on Draco Malfoy.

For more than a week, Pottermore has released one new scene from Harry Potter and the Half-Blood Prince every day. We’ve learned even more about the Potter universe, from Cokeworth, the town where Snape, Lily, and Petunia grew up, to J.K. Rowling’s regret at killing minor character Florean Fortescue. But what fans really wanted is a juicy biography, like the one published for Dolores Umbridge.

After you answer the riddle about Malfoy, you get a new scene titled “Avada Kedavra,” involving Malfoy, Snape, and a bunch of Death Eaters right as (spoiler alert) Snape kills Albus Dumbledore. There’s not much to explore, so just hover your cursor on Malfoy to access the new information.

Some of the “new” Malfoy information will probably already be familiar to Potterheads. Born into a pure-blood family, Malfoy was raised from a young age to believe that he was special and that being a Malfoy meant something. He idolized his father, Lucius, and outwardly copied his manner. Harry quickly became his arch nemesis at Hogwarts, but really Draco envied Harry, who was admired by everyone and talented to boot.

But after Voldemort rose again, Draco started to doubt his father’s viewpoints, especially after the Malfoys fell from grace within the Death Eater ranks and people he was supposed to hate showed him kindness and pity. Although he never outright rebelled, his loyalty to Voldemort wavered. He was, unlike Harry, excellent at Occlumency.

Fans knew—or guessed—some of this already, but Rowling’s insight into Malfoy’s character gives the antagonist even more depth. Although he started out as the bully, his beliefs were shattered and his viewpoints went through a progressive change—something his wife, Astoria Greengrass, also experienced, but never to the extent that Malfoy did. They refused to raise this son Scorpius to believe that Muggles were scum, unlike how they had been raised.

What may be even more interesting is Rowling’s thoughts and deliberate decisions on the character, such as giving him a name that meant “dragon” but pairing him with a wand with a unicorn tail. And despite what some fans thought, he wasn’t “concealing a heart of gold under all that sneering prejudice.” Rowling felt unnerved by just how many fans felt affection for him.

“I have often had cause to remark on how unnerved I have been by the number of girls who fell for this particular fictional character (although I do not discount the appeal of Tom Felton, who plays Draco brilliantly in the films and, ironically, is about the nicest person you could meet). Draco has all of the dark glamour of the anti-hero; girls are very apt to romanticise such people.”

But she, like some fans, imagined that Malfoy’s life got better as he became a more tolerant person—one who hopefully raised his son to be better—but still kept Dark artifacts in his home (and even explored some alchemical manuscripts).

And that’s all we can hope for.