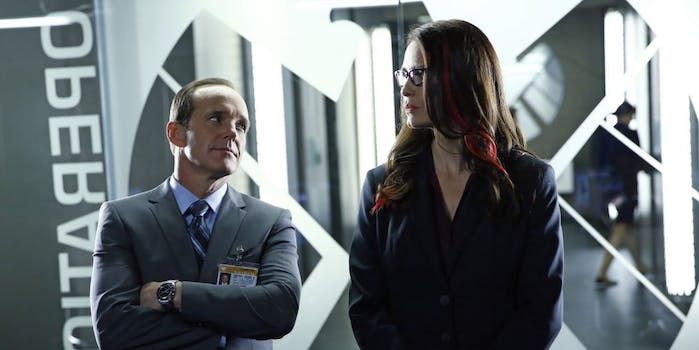 Marvel’s ‘Double Agent’ webseries takes you behind the scenes of ‘Agents of S.H.I.E.L.D.’

This new webseries 'infiltrates' the set of the show.

The Marvel PR monster has sprouted another limb, this time in the form of a behind-the-scenes webseries about Agents of S.H.I.E.L.D.

Double Agent follows a production assistant on Agents of S.H.I.E.L.D. as he tries to uncover spoilers and hidden information about the show. It’s a dangerous task, given the lengths to which Marvel goes to hunt down and destroy any real leakers. The studio has such a tight grip on spoilers that its actors regularly joke about being followed by “Marvel snipers.”

We obviously won’t be getting any serious spoilers from Double Agent, but if you can tolerate the webseries’ Lexus ads, you’ll get some cool behind-the-scenes information from the set. It looks a bit like Doctor Who Confidential, with the first episode featuring appearances from series star Ming-Na Wen (Agent May) and co-creator Jed Whedon.

Each episode ends with a poll, letting fans choose where the double agent will go next. The next episode’s two options are a restricted area and “Vault D Props,” a question to which there is already an obvious answer. Why visit the props department when you can infiltrate one of Marvel’s restricted zones? Come on.