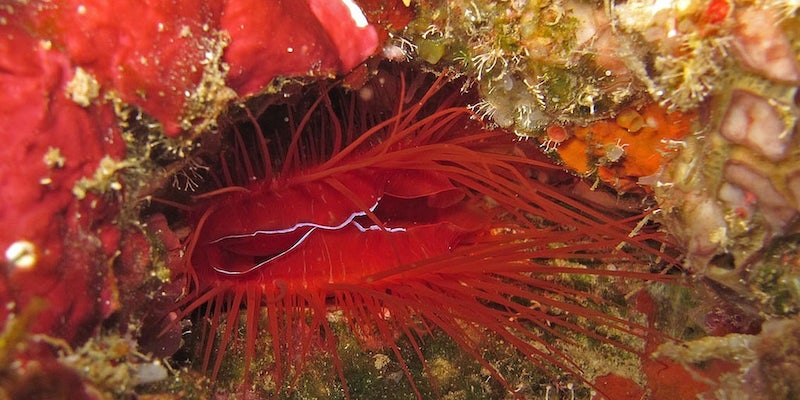 Grab your platform shoes, and let’s talk about the disco clam. The Indo-Pacific ocean mollusk gets its fun moniker from a thin strip of tissue on the very edge of its orange “lips,” which appears to flash like a mirrored ball on the dance floor. Now, researchers have figured out exactly how the clam sparkles.

Scientists originally assumed that the disco clam, or electric clam, or Ctenoides ales, used the same kind of strategy that gives fireflies their glow and squid their scintillation. Those critters rely on bioluminescence, a chemical reaction that produces light. But the new work reveals that the clams don’t produce their own light—instead they reflect light, much like disco balls.

The clams hide a millimeter-wide strip of tissue that acts like a mirror inside their lips. About twice every second, they unfurl their lips and reflect surrounding light.

“We don’t know of anything that is quite like the disco clam,” said Lindsey Dougherty, a biologist at the University of California, Berkeley. With collaborators, Dougherty published a paper about the clam’s unique light show on Wednesday in the Journal of the Royal Society Interface.

The clams’ mirror trick comes from tiny, nano-sized beads of silica embedded in the lips. The reefs they call home are close enough to the surface of the water that shorter (bluer) wavelengths of light filter down. Those beads are just the right size to reflect the blueish light bouncing around the reef. The inner lining of the lip has beads, and the outer part absorbs light. The resulting contrast between light and dark enhances the twinkle effect.

Pretty cool, but why is the clam flashing in the first place? In a news release, Dougherty explains that the disco clam’s display may help it attract potential mates, future meals, or even startle would-be predators. Nailing down the answer to that question is right up Dougherty’s alley: On her Berkeley profile page, she writes that her interest is in “how organisms use light and color throughout the ocean.”

Now that we’ve got the science down, it’s time put on those dancing shoes.