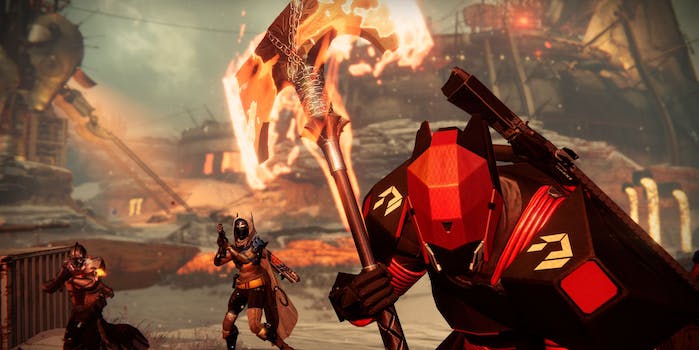 Face down deadly Golden Age technology and get new tools to fight the Darkness.

The Iron Lords have blessed you with eight new artifacts to help you face the Fallen and the horrifying Siva technology they’ve unearthed. Siva was buried for a reason.

During our visit to Bungie HQ almost three weeks ago, in addition to getting hands-on time with Destiny’s new Crucible mode, Supremacy, and the two new Crucible maps, we also had the opportunity to run the new Strike, called The Wretched Eye, that’s included in the upcoming Rise of Iron expansion.

The Fallen, a race of pirates and scavengers pillaging the ruin that is post-apocalyptic Earth, are organized into houses. Destiny’s second expansion, House of Wolves, for example, concerned the activities of the titular house. Rise of Iron features another Fallen house called the Devil Splicers, who are taking advantage of a lost human technology called Siva.

Siva was a nanotechnology developed during the Golden Age when humanity was forging its colonies across the solar system. The nanotech was deemed too dangerous to unleash and was locked away. The Devil Splicers, incorporating Siva into their bodies in Rise of Iron, amply prove why the tech was hidden.

In Destiny lore, a group of powerful Guardians called the Iron Lords fought to bury Siva yet again. They paid for their success with their lives. Only one Iron Lord survived, Saladin, who for two years has been the character inviting Destiny players to the monthly Iron Banner tournament that is named in honor of the fallen heroes.

Now that Siva has been unearthed yet again in Rise of Iron, Saladin will rally the Guardians to fight back against the rising threat of the Devil Splicers. The new Strike that we played at Bungie HQ is one of the missions players will undertake in pursuit of this quest. 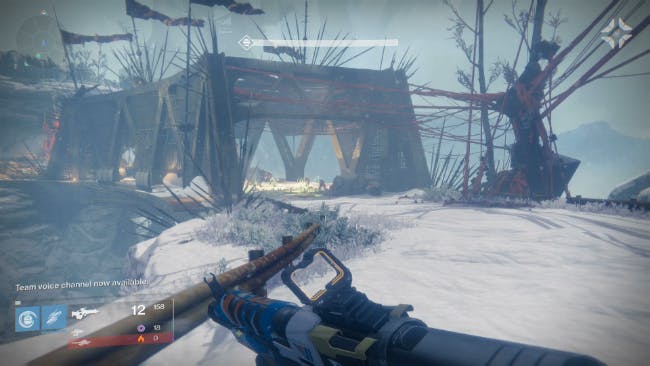 Welcome to the Plaguelands, Guardians.

The Wretched Eye takes place in a new area created for Rise of Iron called the Plaguelands. It’s an extension of the Cosmodrome, the ancient launch site in Old Russia for the colony ships that carried humans to the stars, and the first area Destiny players set foot in when the game launched in September 2014.

Rise of Iron’s new story content is focused entirely on the Plaguelands, which is unique compared to past Destiny expansions. The Dark Below, House of Wolves, and The Taken King all added new missions to the game that took players to multiple if not all four planets that make up the Destiny universe.

The Plaguelands are accessed via traveling through the existing Cosmodrome areas. The Plaguelands maintain the flavor of Old Russia, but are infested with the snaking red cables of Siva tech. Rise of Iron is literally a mix of the old and the new.

Other than their new energy weapons, we didn’t notice much of a difference between the Devil Splicers and the other Fallen we’ve been fighting for years. The energy weapons themselves didn’t change the nature of our engagements. Maybe we killed the Devil Splicers too quickly for those differences to evince themselves. We did encounter a new form of trap that, if triggered, stops Guardians cold, but the trap can be destroyed before or after it’s activated.

We found nodes of Siva tech we had to destroy, but otherwise Siva didn’t seem to factor very much into the dangers we faced during the Strike. It did, however, come into play in the boss fight at the end of The Wretched Eye, where a Devil Splicer High Priest had ripped the eye out of a beastly Hive creature called an Ogre, and using Siva technology had spliced the Ogre’s eye into a handheld weapon.

Trying to kill a Devil Slicer boss armed with an Ogre gun while being chased by an invulnerable Ogre who seemed more than a little pissed off at having his eye ripped out was a harrowing and fun battle.

Also please enjoy the return of Gjallarhorn in its historical role of problem-solver and Boss-melter at the end of The Wretched Eye.

Our Strike run gave us the opportunity to equip some of Rise of Iron’s new weapons, and new armor sets, but Bungie asked us not to disclose any of their stats so you can discover them yourselves when the expansion is released.

Included among the new gear options made available for us to use during our run through The Wretched Eye were Rise of Iron’s eight new artifacts. They represent a meaningful overhaul of how artifacts work in Destiny. And these we can talk about in detail.

Artifacts in Destiny confer methods for generating the Orbs that power a Guardian’s super ability. For instance, an artifact may grant a chance to generate an Orb if you score a precision kill (in most cases, a headshot) against a specific type of enemy or with a specific class of weapon, or if you kill an enemy with a specific form of melee or grenade attack.

Each of the eight new artifacts in Rise of Iron, however, convey a significant ability to the Guardian that wields it. Each artifact is named after one of the fallen Lords of Iron, and to activate one of the new artifacts, players have to fight their way into the Iron Temple, a mausoleum with statues dedicated to the fallen Iron Lords.

Here is a brief description of each of the new artifacts, the abilities they convey, and our impressions as to how they might be useful.

Memory of Jolder: Removes the sprint cooldown penalty, i.e. you can sprint again more quickly after finishing a sprint. Good for anyone who likes things up close and personal. Also useful for objective-based Crucible matches.

Memory of Silimar: Specifically in the Crucible, resistance to damage over time attacks is greatly increased. Good for Guardians who frequently find themselves poisoned or on fire.

Memory of Skorri : When your super is full, nearby allies’ supers recharge faster. Sometimes you have to wait a while for the right time to use your super. Now that’s not necessarily wasted time.

Memory of Perun: Enemies with full supers, and enemies with low health are highlighted. Clearly meant for Crucible players. Kill the enemies that are closest to death or the most dangerous. Your team will thank you.

Memory of Felwinter: Give up your super ability, but gain an extra melee and grenade charge and a small boost to all stats. Orbs grant melee and grenade energy. This was one of the most interesting powers granted by the new Rise of Iron artifacts. Supers are one of the most important abilities granted to a Guardian—a quick way to change the balance during a tough fight. What does it feel like to play for an extended period of time without your super?

Memory of Timur: Melee attacks on minor minions of the Darkness have a chance to turn them against their allies. The other, interesting power. Reminds us of hacking Spectre robots in Titanfall. Having a small squad of minor enemies fighting for you in Destiny could be a funny and good time.

Memory of Radegast: Gain the ability to reflect energy-based projectiles when guarding with a sword, and increased sword ammo capacity. As you saw in the Strike footage, the Devil Splicers are using energy-based weapons, so this artifact is probably designed specifically to interact with the new story-based content in Rise of Iron.

The big question: To what degree will these eight artifacts will be balanced with all the other weapons and abilities in Destiny? Bungie’s designers don’t make these decisions in a vacuum. It’s reasonable to assume that Rise of Iron’s new artifacts haven’t proven to be disruptive during Bungie’s in-house playtests.

But if gamers have proven anything over the years, it’s that they can and will find ways to subvert game content in fashions that game developers did not intend, and gamers usually figure this out quickly. 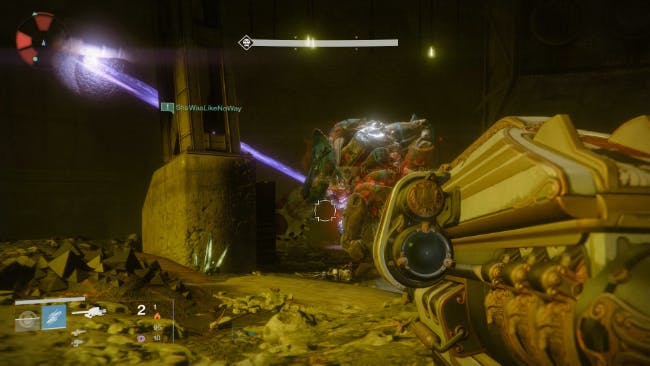 Gjally vs. anything, Gjally wins. Just like the good ol’ days.

The question hanging over us at the end of our visit to Bungie HQ is what happens to all the Destiny players on the PlayStation 3 and Xbox 360 who will not be able to play any of the new Rise of Iron content? The old enemy of game developers—memory limitations—is ultimately responsible for why Bungie had to make the choice not to support seventh-generation consoles with this latest expansion.

The transfer will move all of your Guardians, of course, and all of your gear, so you effectively lose nothing by making the transfer other than the ability to play with your friends who are sticking with the seventh-generation consoles for the immediate future.

So ended our trip to Bungie HQ. And for the record, we had to fight our way in to get all the information and game footage we’ve shared with you over the past two days. 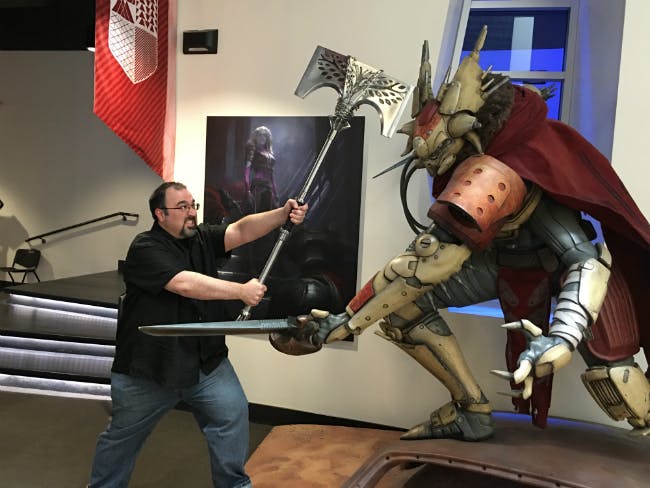