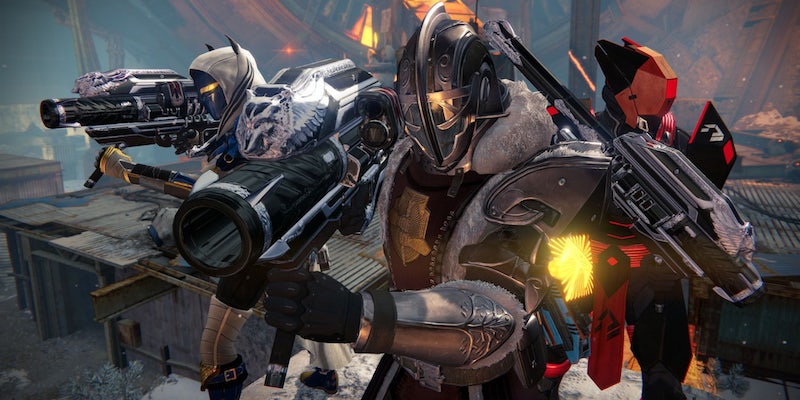 An insider’s look at Destiny’s Rise of Iron expansion

How Bungie intends to keep Destiny fresh, at the beginning of Year Three.

Destiny fans should be pleased with the upcoming game expansion Rise of Iron. It was created by one of their own.

Rise of Iron, the fourth expansion released for Destiny since it launched in September 2014, is focused on a powerful Guardian named Lord Saladin, the last of the Iron Lords. Saladin has to date only been a character who stands in the Tower—Destiny‘s social space located in humanity’s last city on Earth—during the week-long Iron Banner player-versus-player tournament that takes place once a month.

Normally in the PvP portion of Destiny, the Crucible, weapon and armor values are normalized so a Destiny player who just picked up the game has a fighting chance against a stone-cold veteran. In Iron Banner tournaments nothing is normalized. The veteran Destiny player should wipe the floor with fresh meat.

Outside the last city, beyond the Cosmodrome in Old Russia that Destiny players have been patrolling for more than two years, is a frozen tundra called the Plague Lands. It is teeming with the Fallen, one of the alien races picking away at the wreckage of humanity. The Fallen have uncovered and co-opted an ancient and deadly technology.

Lord Saladin will no longer just be a character standing stoically in the Tower once a month. In Rise of Iron he will lead the Guardians through the Plague Lands to destroy the Fallen threat.

It’s no secret that the developers at Bungie have been playing obscene amounts of their own game. When I chatted with community and marketing manager Eric Osborne about Rise of Iron on Tuesday at E3, he revealed he has more than 1,200 hours logged into Destiny.

Osborne and I spoke about the genesis of this new expansion, how the fandom of Rise of Iron’s game director informed its development, how Destiny players have been re-energized by the recent set of game updates, and the imminent return of Gjallarhorn, the most famous Destiny weapon of them all.

Rise of Iron will be released for PlayStation 4 and Xbox One on Sept. 20.

What possibilities were opened up to the team on account of not having to support the previous gen consoles?

The first focus for Rise of Iron was just to make a really big expansion. We know players are out there, they’re hungry for more stuff. That includes story, new and returning Strikes, competitive stuff, new zones, you know, social spaces, activities to share, things to play, weapons to go after, and all that fun stuff.

So we’re actually at a point where we can’t deliver that on legacy generation [consoles] without taking something away, even [from] people who are buying it today. If you bought the Legendary Collection we would have to find something to carve out to make room for Rise of Iron, so that doesn’t make sense to us.

It feels like a really good point in time to make the transition. Ninety percent of our players, upwards of, are playing on current generation systems, the older generations are, you know, a decade old in a lot of cases so it just makes sense for us at this time. 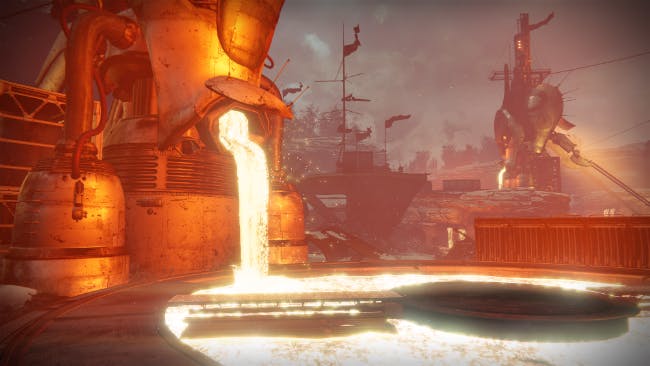 Can we expect any graphical tweaks on account of not having to support the previous-gen consoles? Are we going to notice a difference?

I think so, yeah. I think you will notice a difference. First and foremost you’re going to notice like the weather effects and the snow look pretty gorgeous. And when you get to the Plague Lands, the new zone, the new expansion off of Earth, there’s some really cool skybox and monolithic structures to explore.

It’s this marriage of overcast, post-apocalyptic kind of skies with snow, and then the Fallen are dredging up like lava and magma from the earth and it’s a really stunning space. It’s set both indoors and outdoors so the outdoor spaces have this kind of sweep that players expect from Destiny.

It was definitely more whole cloth with Rise of Iron. It was sort of a factor of our game director, Christopher Barrett, thinking about what he wanted to do. What story he wanted to tell next. And so the themes of the Iron Lords and their sacrifice, and their legacy and this timeless nature of the Cosmodrome, kind of coming together, creating this potent mix.

Certainly we have plans, and we think about long term the bigger, broader beats, what do we want to do with the game, but when it comes to the individual stories we leave that up to the game director on each project to sort of determine, “What do you find interesting about the world?”

So we thought, wouldn’t it be really cool to take that Iron Banner tournament, a ritual that a lot of players engage in, and expose the story underneath? Why is Saladin the lone survivor? What happened?

We had this opportunity with Rise of Iron to think about Lord Saladin as this powerful actor, this guy that’s there to invite you to this tournament to get you ready for something, but what is he preparing for? And the answer is it’s the return of his ancient enemy, this ancient technology that the Iron Lords sacrificed [themselves] to seal away underneath the Earth.

Then you have the Fallen, who we’ve cast as these scavengers who are looking for technology and splicing it, so what would happen if they unearthed it, and how would Saladin combat it?

Was there a particular prompt that made you go in this direction?

I think seeing players gravitate towards the Iron Banner as that ritual, and seeing how interested they were to learn more about the names and the people behind the names for the weapons [you earn during the tournament]. 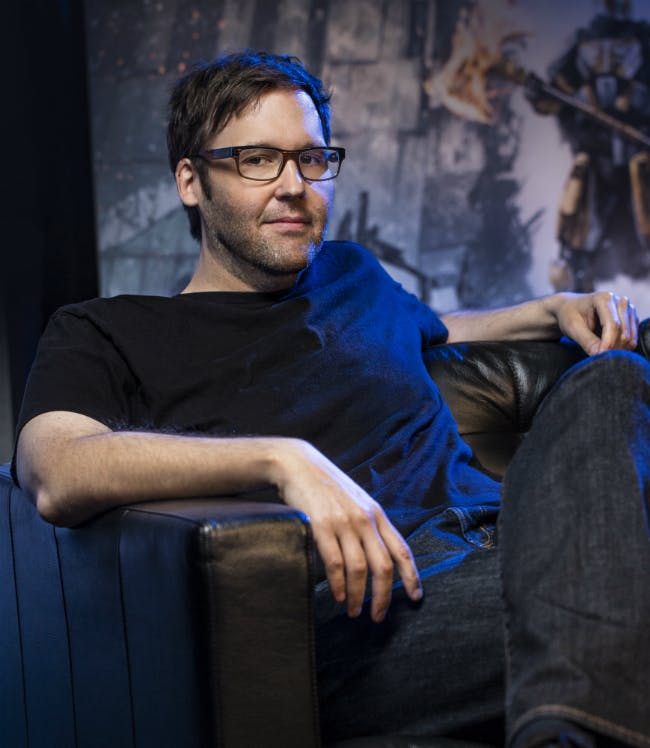 How did you structure the team for development of Rise of Iron? Do you have any compartmentalization like you did for the development of the Vault of Glass raid?

We’re still open office. I don’t think we’ll ever lose that. We love mixing it up and having a collaborative environment.

The executive producer is Scott Taylor, he was also with Barry on House of Wolves as well, so we’re kind of bringing the band back together for this one. And their team is all focused on Rise of Iron.

Certain aspects, like there is a raid team who works specifically on raids. It’s a very specific task. We need people who are seasoned raid developers and designers to work on the raid for Rise of Iron.

How did you decide to bring back Gjallarhorn?

It was sort of a combination of Christopher Barrett thinking about what are some things that would thematically make sense in the world, what kind of gear would the Iron Lords care about and what would they be connected to.

And also, he’s a crowd pleaser. Barry just wants to, he plays Destiny himself, his family plays it, he’s in a community clan so he’s also sort of, I think, maybe serving his own selfish needs of wanting to get it back.

And we look at the Gjallarhorn, it certainly has its own story around it, but some of that story was frustration. Some people couldn’t get it. So this is a way for us to provide a quest, if you want it you can go after it, you can earn it, it’ll feel connected to the story. 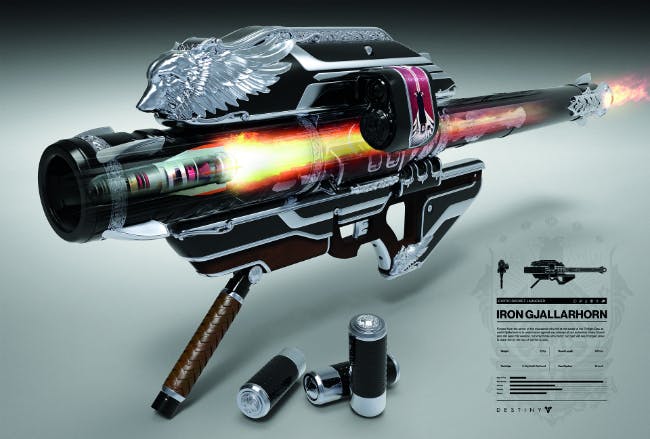 We’re really happy with April and how people are coming to it. Certainly we’re going to make refinements and changes to hopefully improve it again with Rise of Iron, but yeah we want to strike the balance between providing lots of gear for people to go on the hunt for, but we don’t want to make it frustrating.

Since the April update you’ve created more paths to hitting max level than previously, so I wasn’t sure whether you’d adjusted the loot tables or whether it was more a matter of having more ways to get loot that made it seem like drops were better and more frequent.

There was a moment where if you wanted the highest level gear you did the raid. Over time then that became the raid, or Trials of Osiris. With April we just sort of opened the aperture. We just said like look how you want to look, earn the gear that you want based on its aesthetics and perks, and we can create these high end sets through Trials and the raid, and we can just kind of have our cake and eat it, too, right?

So it’s a combination of more avenues to get loot, and more generous loot drops.

We definitely heard from players, and have heard over time, they wanted gear drops in the game to be more generous. It helps us focus in on the action game as well. Instead of looking at the carrot at the end of the Strike you can have fun, and just run through [the King’s Fall raid] not because necessarily [for] the gear, maybe you have all the gear and you’re just running through because you like playing with your friends. That’s a thing you do together on Thursday nights, or whatever.