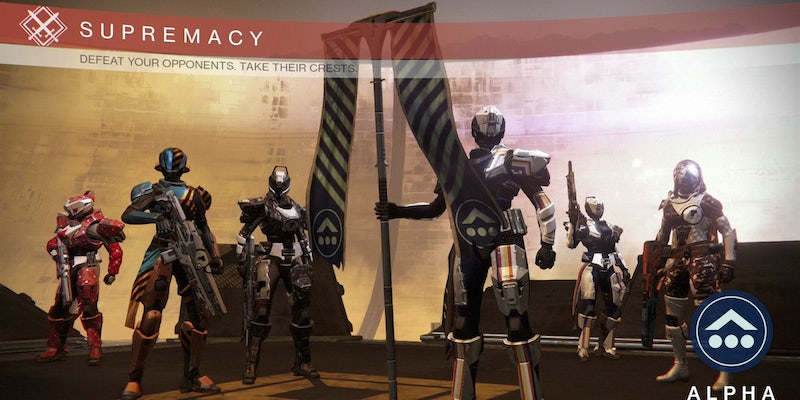 Teamwork is more important than ever.

The story for the new Destiny expansion Rise of Iron may be loaded with wolves, but its new Crucible match type, Supremacy, is not for lone wolves.

Almost three weeks ago Bungie invited a small group of journalists, Twitch streamers, and YouTubers to visit its offices in Bellevue, Washington, to get an advance look at content from Rise of Iron. According to our hosts, Bungie had never done this sort of press event prior to the release of a major expansion.

Bungie had a good reason for opening its doors: The studio has a lot riding on Rise of Iron. Destiny begins its third year this September. Players are hungry for something new to occupy them. And releasing expansions for Destiny has not always been a smooth ride for Bungie.

Christopher Barrett, game director for House of Wolves, and now Rise of Iron, can draw upon Bungie’s experience to craft an expansion that delivers what Destiny fans want. That he and the rest of the Rise of Iron team are drawing off the Iron Banner tournament, a popular, monthly player-versus-player event also gives them an advantage in designing the new expansion.

Barrett’s team has a body of lore, the story behind the Iron Banner tournament, to draw upon for inspiration. Destiny players have come to expect an increased focus on characters with the expansions and improvements to Destiny’s original lackluster story. The Taken King solidly delivered in this regard, in particular with Nathan Fillion’s performance as Cayde-9. Rise of Iron takes as its protagonist Lord Saladin, the character who invites players to the Iron Banner every month, and thus an extremely familiar face for Destiny veterans.

Before showing us the story-based content for Rise of Iron, however, Bungie wanted to give us a healthy taste of the new Crucible player-versus-player content, which includes an entirely new game type, and four new Crucible maps. We were allowed to try two of them. 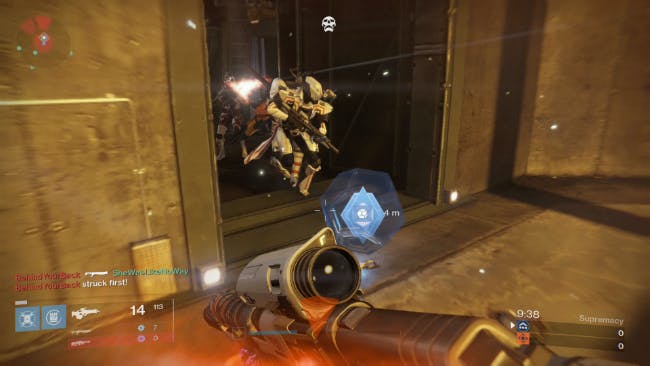 The new match type, Supremacy, will be instantly familiar to Call of Duty fans because Supremacy is more or less the equivalent of Kill Confirmed mode in CoD. Supremacy will only be available to Rise of Iron players (in other words, Destiny players on PlayStation 3 and Xbox 360 will not have access to Supremacy mode).

When a Guardian is killed in Supremacy they drop a crest that looks like one of the loot engrams dropped by enemies in Destiny’s story mode. Teams score points for picking up crests dropped by dead enemies. They can also recover the crests dropped by allies to deny points to the other team.

Supremacy will be playable in both Rumble, the six-player every-Guardian-for-themselves game mode, and in 6v6 team-based matches. We played several matches of the team-based variant.

Sticking together with your comrades is a good idea in other Crucible-type matches. In Control mode, the more Guardians who attempt to capture an enemy control point, the faster control of that point flips to their team. In Rift mode, your teammates are essentially like offensive linesman in a football game, protecting the Guardian that holds an item called the Spark, and who attempts to deliver the Spark to the other team’s Rift in order to score points.

Teamwork may be more important in Supremacy mode than in any other Crucible mode, however, precisely because you can deny the enemy points by controlling the areas of the map where your teammates’ crests have been dropped. And making haphazard runs to pick up enemy crests can be tantamount to suicide, which not only means you fail to recover the enemy crest and score points, but also wind up handing points to the other team.

The more players go off on their own in Supremacy, the smaller their chance of victory. We discovered this for ourselves during Supremacy matches on two of the four new maps included with Rise of Iron.

The first map we played on, Icarus, is a PlayStation 4 exclusive set in a Warmind solar collector on Mercury. Bungie, since our visit, has revealed that Icarus was inspired by real-life heliostat thermal collectors.

This is not the first time Xbox One players have been denied new content (an Activision representative chose not to comment on when or if its exclusivity deal with Sony would expire).

The Icarus map seemed to favor mid- to long-range combat. Here’s one of the matches we fought on Icarus in the new Supremacy mode.

The second and final map we played on, which will be available for both PlayStation 4 and Xbox One, is called Floating Gardens and is set in a Vex temple on Venus. Bungie, since our visit, has revealed that the Floating Gardens is a data dump where the Vex deposit dead comrades to absorb their data back into the collective.

Floating Gardens seemed to favor mid-range engagements, also with plenty of opportunities for close-quarters fighting, particularly on a wicked bridge in the middle of the map.

Here’s one of the matches we fought in the Floating Gardens, again in Supremacy mode. Enjoy our team’s clutch comeback at the end of the match.

The other big news for Crucible fans is that private matches are being launched with Rise of Iron. Unlike Supremacy mode, private matches will be available for Destiny players on all platforms, both last- and current-gen.

This is a feature that Destiny PvP fans have wanted for a while, and Bungie has included a healthy number of setup options.

Last, but certainly not least, you’ll be able to turn light level on or off, meaning you have the option to conduct your own private Iron Banner matches where higher-level characters have the advantage. And considering Rise of Iron was inspired by the Iron Banner tournament, including this option in private matches makes all the sense in the world.

Between one and 12 players may join private Crucible matches, which means you can enter the match on your own and investigate Crucible maps old and new with more detail than ever before. You can find the very best sniper nests and the tight corners where you want to ambush your enemies with shotguns or melee attacks.

We asked Bungie whether the developers were afraid that players will abuse this by, for instance, just standing still to allow their friends to land those headshots and earn those assists to complete those Crucible bounties faster than otherwise might be possible. But Bungie isn’t worried about it.

On Wednesday we’ll give you a look at Rise of Iron’s story-based content, including a run through the expansion’s new strike, The Wretched Eye, presented in its entirety.