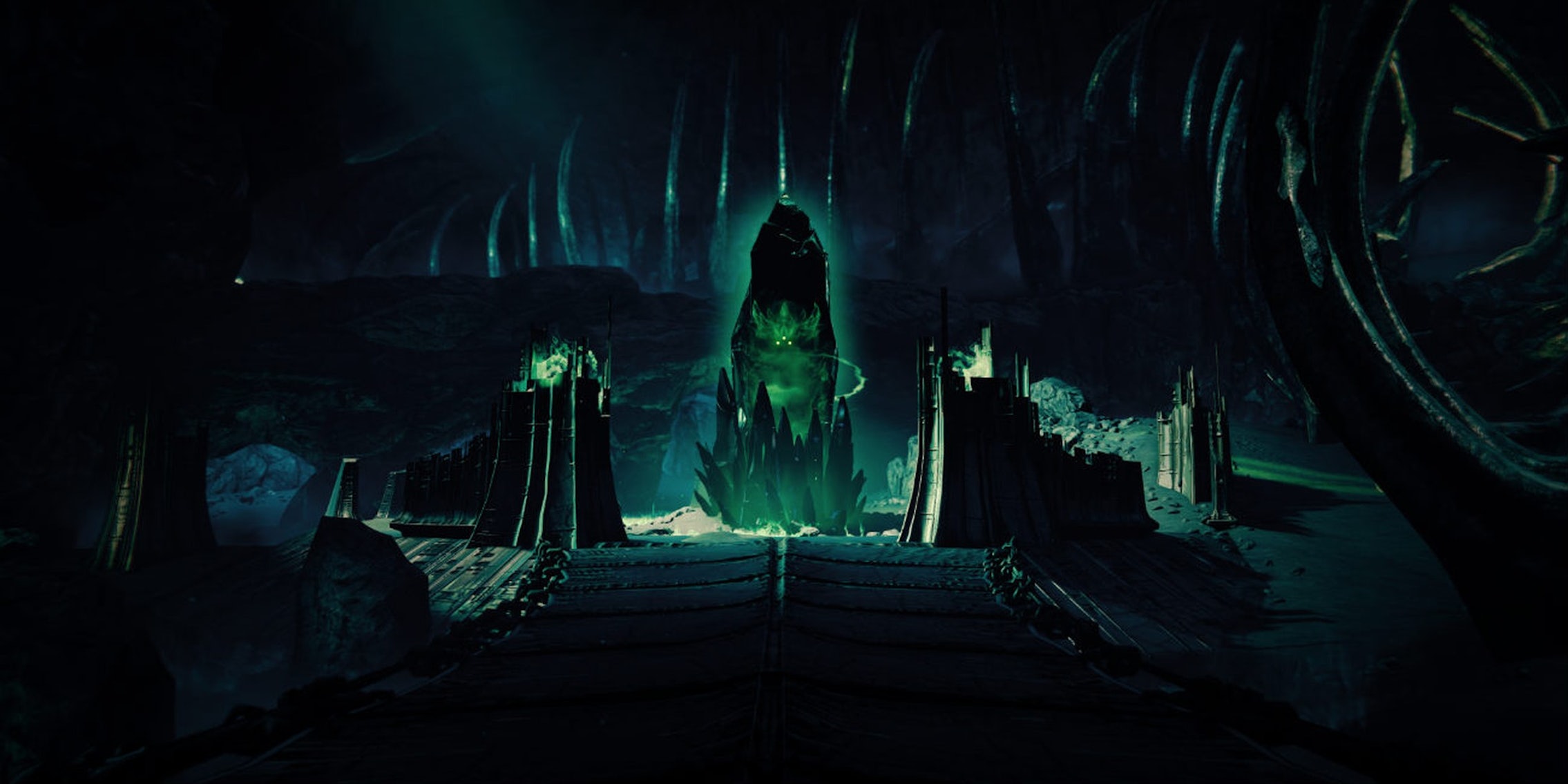 The Dark Below expansion adds little new seasoning to Destiny

The Dark Below has a hefty price tag for a little new flavor.

Calling The Dark Below, the first DLC for Destiny, an “expansion pack”—a term which usually denotes a substantial amount of new content—doesn’t feel like it passes the smell test.

I got everything new I expect out of The Dark Below in about four hours, and then it was back to the rinse-and-repeat-ad-nauseum gameplay that defines Destiny. The Dark Below feels less like a quality side dish and more like the little seasoning packet you get with a package of ramen noodles.

The Dark Below might make the ramen that is Destiny taste a little better, but you’re still eating ramen. Awfully expensive ramen. 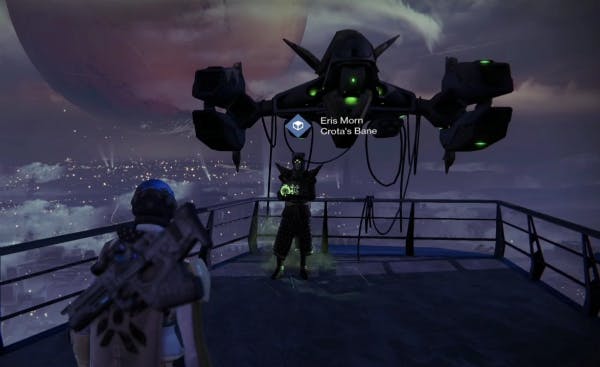 Screenshot via The Dark Below | Remix by Dennis Scimeca

Eris sends you on three story missions. They all take place almost entirely on recycled map space, and should require no more than 10 to 20 minutes each to complete. In Fist of Crota, you infiltrate a cave on Earth taken over by the Hive. Your double jump, or teleport ability, is temporarily taken away, which is relevant because a big bastard swinging a giant sword is chasing after you.

In Siege of the Warmind you enter the brain core of the artificial intelligence Rasputin. This is the only substantially new story space in The Dark Below, and Siege of the Warmind was the high point of the new DLC, for me. You fight a new flavor of Hive Wizard that drops green landmine-like runes on the ground, all set to eerily-distorted classical music, the music being Rasputin’s way of saying “Please help me.”

The third and final story mission, The Wakening, takes place in the Temple of Crota on the Moon. The only new map space here is essentially a long corridor that opens into a chamber where you beat up a floating crystal and some more of the special Hive Wizards. You then go back to Earth, where Eris gives you Murmur, a special fusion rifle that can swap between Arc and Solar damage. Murmur admittedly will come in handy during weekly Nightfall Strikes where success depends in large part on dealing specific types of elemental damage. 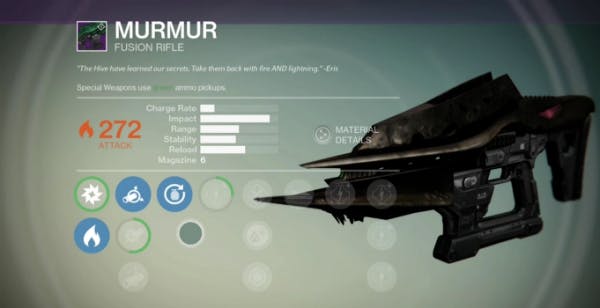 Screenshot via The Dark Below

Finishing the three story missions opens up Quest Steps, most of which are Hive-themed, one-time bounties. Three of them require players to go to the Cosmodrome and kill named baddies hiding in the existing maps. Each of these will take maybe 10 minutes to complete if you know your way around.

The fourth Quest Step requires killing a certain number of specific enemies and is most readily-accomplished by running Siege of the Warmind two or three times, i.e. The Dark Below rapidly falls into the pattern of all Destiny content in that you do it over and over again.

Finishing these four Quest Steps unlocks the new Strike, The Will of Crota, which takes place on Earth, again almost entirely on recycled map space. The goal is to kill a badass Hive Wizard named Omnigul. This Strike is available on both PlayStation and Xbox versions of The Dark Below.

The second new Strike, The Undying Mind, takes place on Mars and is a PlayStation exclusive. Unfortunately, both of my Destiny characters that are a high enough level to handle content in The Dark Below are on the Xbox One, which means I have no access to the second Strike, and can therefore tell you nothing about it. The denial of a Strike mission, which was also the case with vanilla Destiny, now feels particularly egregious to Xbox players. Another 15 to 20 minutes’ worth of fresh content is a substantial percentage of the total, considering how little there is in The Dark Below.

The final Quest Step, which is only available on Fridays and Saturdays as it requires a purchase from the weekend vendor Xur, is called Urn of Sacrifice. You progress through the Quest Step by killing specific Hive enemies, and are rewarded with a new piece of arm armor at the end. 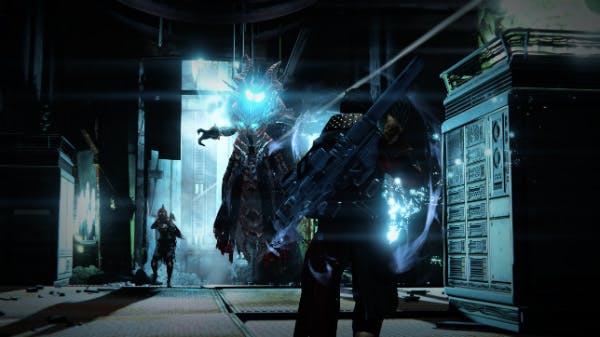 The Dark Below includes three new maps for the multiplayer Crucible mode. Skyshock is in Old Russia, and the aesthetics of that location feel played at this point. The Cauldron takes place in a Hive temple, and has a really cool view of the surface of the Moon that’s been ripped open by the Hive. You may have a few seconds to enjoy the never-ending tumble of rock from the tops of those giant gouges in the Moon’s surface, before another player kills you. Pantheon is set in the Black Garden on Mars and, again, has a nice view over a cliff that you may enjoy for a few seconds before you die.

There are of course new banners and clothing and other doodads associated with the introduction of a new faction, Crota’s Bane, for which Eris Morn is the sole vendor. There are bounty missions to run over and over again to earn Crota’s Bane reputation points. There’s new gear to earn through random loot drops, and there’s also a slate of new weapons, which includes the replacement of everything in the Vanguard Armory with weapons that require The Dark Below to access. In other words, if you don’t own this DLC, a reliable source of Legendary weapons is lost to you.

The new Raid, Crota’s End, begins with a run through a dark cavern in an attempt to light a series of lanterns. It is, as with the Vault of Glass, extremely difficult. Your ability to run and jump is taken away entirely during portions of Crota’s End, which sucks when you’re being swarmed by dozens of Thralls.

The challenge in recommending The Dark Below at this price point to anyone other than a hardcore Destiny fan (who was likely never on the fence about the purchase, anyway) is that this DLC tries to please too many masters. If you don’t care about the Crucible, that new content doesn’t matter. If you don’t have a Raid group, Crota’s End is irrelevant. And what Destiny really needs—a satisfying narrative—is still entirely absent.

What miserable math that is to crunch, especially now when The Dark Below costs a full third of the price of other fantastic games released for the holiday season.

The Dark Below DLC was released on Tues. Dec. 9 for PlayStation 3, PlayStation 4, Xbox 360, and Xbox One.