Craigslist has been bombarded with ads for the defunct Star Destroyer

The 15-disc CD changer really makes it worth it.

In the market for a used vehicle that is not only extremely iconic, but can also obliterate a planet? Craigslist has you covered! Thanks to some extremely bored Star Wars fans, the popular local classifieds site has been invaded by listings for defunct Imperial space vehicles, and they’re pretty darn entertaining.

At least three ads for an “Imperial II-class Star Destroyer” have popped up in different cities in the past few days, including Pittsburgh and Humbolt, Calif. In each case, extreme care has been taken to faithfully represent the fictional ship with an accurate description.

“Fully equipped with LeGrange targeting computers, heavy ion cannons, Phylon Q7 tractor beam projectors, leather bucket seats, and a 15 disc cd changer,” one ad reads. “As you can see by the picture provided, the deflector shield generator domes are intact. That is a state of the art ISD-72x.”

Fittingly, there’s even a “buyer beware” listing calling out the “seller” of the Star Destroyer for not letting a potential customer take a spin without a deposit. 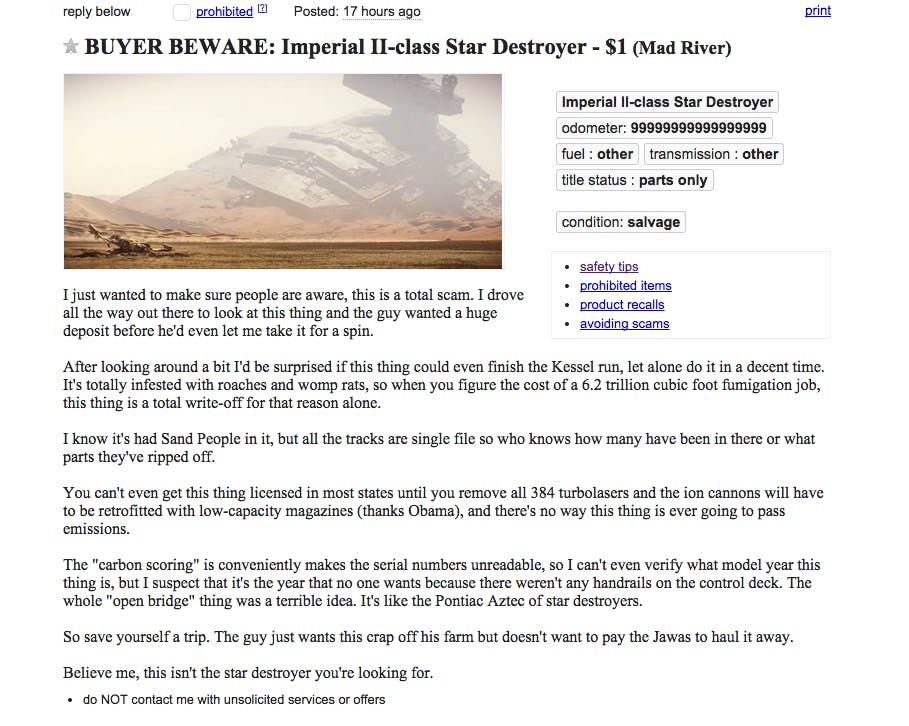 “After looking around a bit I’d be surprised if this thing could even finish the Kessel run, let alone do it in a decent time. It’s totally infested with roaches and womp rats, so when you figure the cost of a 6.2 trillion cubic foot fumigation job, this thing is a total write-off for that reason alone,” the post claims, adding, “So save yourself a trip. The guy just wants this crap off his farm but doesn’t want to pay the Jawas to haul it away. Believe me, this isn’t the Star Destroyer you’re looking for.”