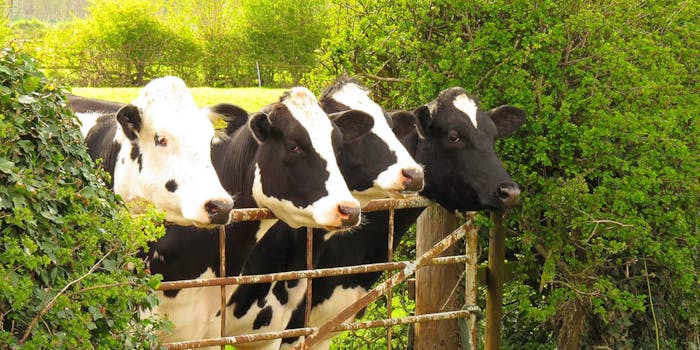 Inside the social networks of cows

If they had smartphones, they’d be on Facebook all the time.

When researchers wanted to study social networks in animals, they naturally turned to cows.

Sadly, this is not because cattle have a secret bovine Internet where they post selfies and gossip about farmers. It’s because the domesticated animals like to hang out in herds, and we find it easy to study them. Examining social networking in animals gives us clues as to how animals behave in groups—something that affects the way ecosystems work and even gives us insights into specific phenomena such as how diseases spread.

Researchers from the University of Tennessee, Knoxville, used radio-frequency identification tags in the ears of 70 Holstein calves to track the precise movements of the animals for a week as they fed, slept and hung out in three pens.

Each time calves passed within 30 centimeters of each other, the researchers’ analysis software pinged it as a social interaction.

“The results provide one of the most detailed insights into the social network associated with animals ever compiled,” according to a post from the Physics arXiv blog. The work was published online at arXiv.org late last month.

Like people, cows do a lot of their socializing around food. The connections between calves at feeding times became much more frequent as the animals crowded around grain troughs. Next, they moved on to hay, where competition was a little less fierce. “It is only the contacts around the hay bunk during feeding time that may attribute to the real social ties,” the researchers write. They pointed out the importance of knowing a little bit about cow behavior to help interpret their findings in this way.

This kind of information could help researchers understand how disease passes from one animal to another.

Other researchers have shown that cows have ‘best friends’ or group mates. The study measured cows’ heart rates when they were penned with a friend or with a stranger for 30 minutes. “When heifers have their preferred partner with them, their stress levels in terms of their heart rates are reduced compared with if they were with a random individual,” Krista McLennan, the researcher who did the work for her Ph.D. at Northampton University, told The Daily Mail.

A 2011 Guardian article on the emotional depth of cows points out that while cow social relationships may be a surprise to some, others greet the news with sage nods:

To anyone who works, or has worked, with cows, it comes as no surprise that cows are capable of friendships. Within any herd there is a pecking order that results in cows coming into the milking parlour every time in more or less the same position in the queue. At the dairy farm I worked on as an agricultural student we had “Devilish Delilah”, “Crafty Caroline” and “Pain-In-The-Arse Mary-Rose” – all of which were nicknamed because of their annoying or aggressive antics at milking time or feeding time. Dominant cows will push their way to the front of the queue, bully and intimidate more sensitive souls, and dictate when and where the group will move around their pasture. No submissive cow would want to be their “best friend.”

Cow personalities were apparent even to little me—I lived on a dairy farm until I was 15. We knew to avoid cow 1709, a cranky gal who had charged one of the farm workers. And we praised the gentle, friendly Sungoddess, a sweet and beautiful Jersey known for her affectionate behavior during milking.

I’d totally be friends with Sungoddess on Facebook, but 1709 would be blocked.

Photo via Phutball/Flickr.com CC BY 2.0