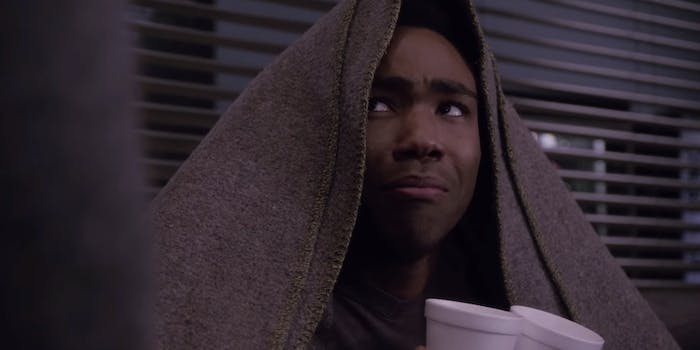 Despite fans’ best efforts, NBC pulls the plug on ‘Community’

The darkest timeline, first referenced in one of Community’s best (and most ambitious) episodes, “Remedial Chaos Theory,” seems like both a bleak and odd place. Pierce died, Jeff lost an arm, Shirley became an alcoholic, Annie went insane, and Troy destroyed his larynx after eating a gnome that was on fire.

But for many fans, the darkest timeline is actually cancellation, a thought echoed by star Joel McHale.

In the midst of renewal season for network television, Community was canceled Friday after airing five seasons. It’s even worse than when Abed found out Cougar Town got pushed back.

Also read: Six seasons and a movie: How ‘Community’ beat the odds for so long

It falls one season and a movie short of the fandom’s “six seasons and a movie” mantra, a phrase that turned from a throwaway joke in a clip episode to the main rallying cry for everyone from creator Dan Harmon to the newest fans. Even though the show never did particularly well in the ratings, it kept getting renewed.

But now that it’s gone (at least until another network or Hulu or Netflix give it a second life)? It’s total chaos.

@crupicrupicrupi I wish I could, but it’s official.

It’s a show that would’ve never gotten as far as it did without its fans, and despite what happens next, the show’s cast and crew are grateful for the five seasons they did get. And the condolence tweets are pouring in.

Twitter isn’t big enough to hold my condolences and more importantly my gratitude to the best fans, cast and crew in TV history. Excelsior.

Thank you for the love, best fans in the world. Thank you @danharmon for the best job of my life. #ePluribusAnus

Welp, the time has come. #Community has been cancelled. Still, FIVE seasons for a bubble show is MIRACULOUS! Much love to you all! :) xoxo

Plenty of shows have been canceled in the past few days, but few sparked such a certain fervor from those who watched it as Community. They’re going through the five stages of grief all at once on Twitter, and NBC is the villain.

If you’re snarking on Community being canceled, then we are not friends today, because you don’t have taste. See you tomorrow.

Says it all. #Community pic.twitter.com/9RYkxRqOfx

COMMUNITY IS LIKELY ONE OF HULK’S FAVORITE SHOWS OF ALL TIME. TO SAY IT WILL BE MISSED IS AS BIG AN UNDERSTATEMENT AS YOU CAN MAKE.

People are hoping, in spite of the dark future, that someone else will pick Community up for a sixth season. There’s enough buzz for it right now. The fans want it.

Think it’s likely Netflix, Amazon, or the like will bid to revive just-cancelled “Community” in some form. Five seasons and a movie?

A streaming service that wants to plant its flag & make some noise should commission a 6th season of #Community. I think it could happen.

And where would the show’s writers be without its humor?

@abobrow You wait til AFTER we’re canceled to finally write something funny?