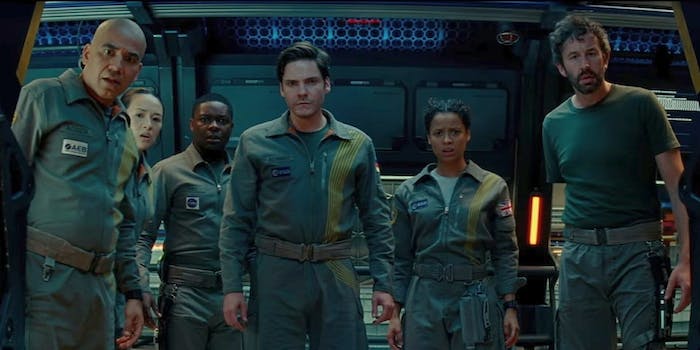 Why is ‘The Cloverfield Paradox’ on Netflix and not in theaters?

'The Cloverfield Paradox' was originally meant to be released in IMAX.

The Cloverfield Paradox is being hailed as the movie equivalent of Beyoncé’s “Lemonade,” a comparison that’s technically accurate while also kind of misleading.

Announced during the Super Bowl, The Cloverfield Paradox, directed by Julius Onah, is the latest installment in J.J. Abrams‘ Cloverfield franchise. For most people, the first we heard of it was this enigmatic tweet from A Wrinkle in Time director Ava Duvernay (“#FilmTwitter is going to explode tonight”) or the trailer. At 30 seconds long, it told us nothing besides the film’s connection to Cloverfield, the presence of actress Gugu Mbatha-Raw, and that it would arrive on Netflix “very soon.” By “soon,” Netflix meant immediately after the Super Bowl.

As per Duvernay’s tweets, this was exciting for a couple reasons: the novelty value of a surprise movie release, and the fact that it’s a sci-fi thriller starring a black woman, directed by a black man. This fits into Netflix’s reputation for championing projects with diverse creative teams (Sense8, The OA, Mudbound), and achieving success through online virality (Stranger Things, American Vandal). It also hides the fact that The Cloverfield Paradox should have come out in theaters but instead was unceremoniously dumped by its original distributor, Paramount Pictures.

The Cloverfield Paradox is a great example of the film industry’s mixed feelings about Netflix. In the words of The Good Place writer Demi Adejuyigbe:

extremely excited for THE CLOVERFIELD PARADOX, directed by Nigerian-American Julius Onah. extremely unexcited they’re just dropping it tonight with absolutely no notice, after a 30 second trailer that didn’t even mention who’s in it or that it was dropping tonight

On the one hand, Netflix buys projects by creators who are marginalized by traditional Hollywood. The platform is also a lot more accessible than paying for a movie ticket, especially when we’re talking about indie films like Mudbound. On the other hand, it’s easy for films and TV shows to appear on Netflix and then sink without trace.

Traditionally, a film like The Cloverfield Paradox would get weeks of ads and publicity interviews, followed by a theatrical release. On Netflix, it appears one day and then stays forever. It got a unique boost from that 30-second Super Bowl slot (which cost an estimated $5 million to air), but its success depends on whether the buzz continues after its five minutes of Super Bowl fame. The same goes for TV shows, since Netflix drops a whole season at once, making it hard to build momentum. This all adds up to a weird situation where dozens of new movies are technically available on Netflix, but may not find an audience because people don’t know about them. And there’s no way of knowing how many people do watch a movie like The Cloverfield Paradox, because Netflix doesn’t release its viewing numbers.

Just to be clear, Netflix doesn’t look like the bad guy in this particular case. It effectively rescued a movie that was dropped by its own studio. Originally titled God Particle, The Cloverfield Paradox wasn’t meant to be a secret, “Lemonade”-style release. Paramount planned to release it in theaters and IMAX, before delaying it twice and then deciding it wasn’t worth releasing at all. The cast includes David Oyelowo, Daniel Bruhl, and Chinese star Zhang Ziyi, but Paramount still thought it wasn’t likely to make a profit. So Netflix bought it last week, and now you can watch it on your laptop. Not quite a happy ending, but maybe that Super Bowl spot will work its magic and make The Cloverfield Paradox into a viral hit.