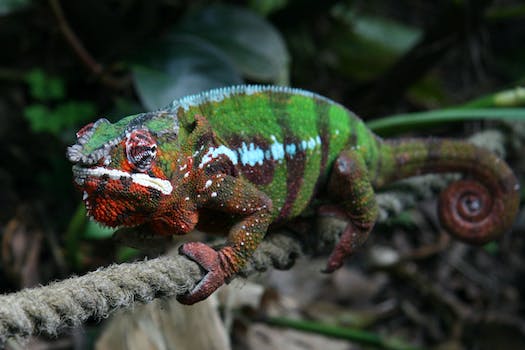 Setting the record straight on chameleons and camouflage

It's not about hiding. It's about mating.

This handsome little reptile made the rounds on Reddit yesterday.

According to one redditor who apparently owns many chameleons, the reptile in the picture is a blue bar ambilobe panther chameleon.

A common misconception about chameleons is that they use their color-changing abilities for camouflage. This is evident in the many comments in the thread suggesting that the chameleon is attempting to camouflage itself against the colorful towel. Usually, other people immediately correct these comments, but regardless, this is a good opportunity to talk about color-changing skin in the animal world.

Any animals that change color do so using special color cells called chromatophores. The ability to change color is actually common among “cold-blooded” animals that can’t regulate their own body temperature. But chameleons, squids, octopuses, and cuttlefish (cephalopods) are the most famous for it.

Cephalopod chromatophores are unique because their pigment cells are surrounded by muscles. When those muscles contract, they expand the sack of pigment, making a little dot of red, brown, or yellow under the skin. Because the chromatophores are surrounded by muscle, they can expand or contract in as little time as it takes an electrical signal to make it to the muscle via the brain and nervous system.

Chameleons’ chromatophores are not affected by muscles but instead by chemical messages between cells, as well as by light and heat. But that doesn’t mean they’re any less awesome, and researchers are still figuring out just how they work.

In 2014, researchers discovered that panther chameleons—like the one in the photo—primarily change colors by using a special type of chromatophore called an iridophore (cephalopods have a layer of these as well, but they work a bit differently). These peculiar cells contain a lattice of guanine nanocrystals—tiny photonic crystals embedded directly in chameleons’ skin that they can reorient to reflect different wavelengths of light.

Physicist Igor Smolyninov likened the effect to that of an oil slick in water in an article about the 2014 study. The thickness of the layer of oil in the water is responsible for the colors you see, Smolyninov said.

As if all that weren’t interesting enough, you can watch the bizarre sport of chameleon bowling.