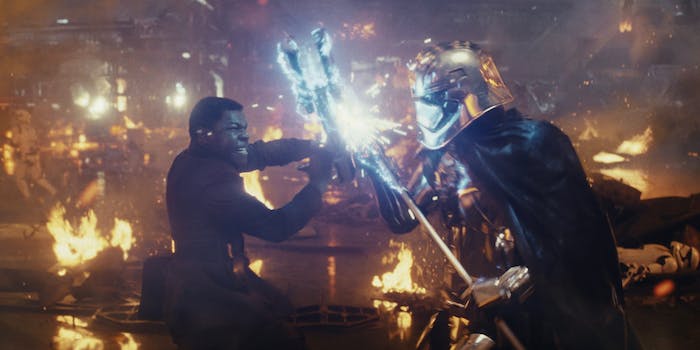 It reveals a lot about Phasma.

Star Wars fans are getting their first look at one of the 14 deleted scenes featured on the Last Jedi’s home release, which includes a drastically different ending for one of the movie’s more polarizing characters.

Was Captain Phasma—the domineering First Order military commander who ruled over her stormtroopers with a chrome fist—a poorly written character or just criminally underutilized? While supplemental information in the form of Delilah S. Dawson’s novel and a Marvel miniseries gives Phasma more depth, it doesn’t always come into play on-screen. Her presence in The Last Jedi lasted mere minutes as she captured Finn (whom she called F-2187) and Rose Tico, then ordered their execution. Even her final face-off against the former stormtrooper left some fans wanting more as Phasma, whose face had finally been exposed, fell into the flames.

A new deleted scene, which was released on the latest episode of the Star Wars Show, shows a very different end for Phasma, whom director Rian Johnson has jokingly called “the Kenny from South Park of this series.” (The scene starts around the 1:35 mark.) Phasma’s left eye is still exposed to reveal a cold blue eye filled with hatred for Finn, but the circumstances are much different. Finn lost that fight and is surrounded by stormtroopers as Phasma confronts him one last time, but Finn has one more card up his sleeve: the revelation that Phasma had a hand in the destruction of Starkiller Base in The Force Awakens.

Why was the scene cut? According to Johnson, he changed the scene because of a pacing issue.

“I really like the little moment of Phasma being caught and getting called out by John, and that little game of chess that they have,” Johnson told Entertainment Weekly last week. “But we needed a much more condensed version of that scene, where essentially it’s the same outcome.”

The logic behind cutting the scene and ending it with Phasma falling down into the flames instead makes sense; the deleted scene does slow down the momentum as the story heads toward Crait. But it’s a shame it didn’t work because it reveals a lot about Phasma, who went out of her way to execute Finn in a cruel manner for betraying the First Order but would do the same thing and cover it up if she can save herself, in a short amount of time.