Finally, a female character who isn't living up to a lofty moral code.

After decades of perfect role models and girl-power action heroines, mainstream pop-culture is finally moving on to a more nuanced age of celebrated female characters. Just take a look at Shonda Rhimes shows, The Hunger Games, and flawed superheroes like Jessica Jones. This year, one of the most exciting examples is Captain Phasma in Star Wars: The Force Awakens.

The original six movies gave us two iconic sci-fi heroines, Padme Amidala and Leia Organa. But like most Hollywood franchises, developed female side-characters were thin on the ground—especially compared to the wealth of male roles like Boba Fett, Qui Gon Jinn, Yoda, Jabba the Hutt, Chewie, and the droids.

Captain Phasma—a towering, armor-clad captain of the First Order—is a true rarity in Hollywood. She’s a female villain who is neither a femme fatale nor a foil for a female hero. Even her appearance is revolutionary: a metallic stormtrooper outfit that staunchly avoids the impractical “boob plate” armor favored by so many video game designers and comic book artists. 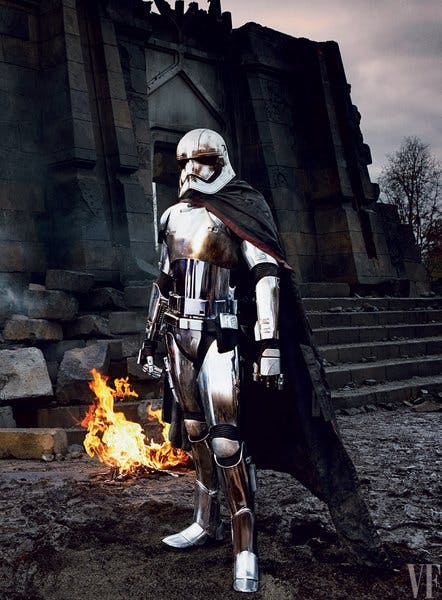 Speaking to Variety, actress Gwendoline Christie mused on her career trajectory from Game of Thrones‘ Brienne of Tarth to Captain Phasma. “I don’t think many female actors get the opportunity to play a part where they’re not having to think about the way their face looks,” she said. “It was great as an actor to work on your skills—that it isn’t about holding your head so you look beautiful.”

Even in supposedly gritty and realistic action movies, attractiveness often outweighs authenticity for female characters. One of the most egregious examples this year was Elizabeth Olsen’s turn as Scarlet Witch in Avengers: Age of Ultron, for which Joss Whedon told Olsen to keep her face calm during action sequences. Scarlet Witch is fueled by anger and grief throughout the movie, but her facial expressions were deemed too unattractive for slow-motion shots.

In a similar vein, Jessica Alba admitted that she was told to cry less realistically in Fantastic Four: Rise of the Silver Surfer. “The director was like, ‘It looks too real. It looks too painful. Can you be prettier when you cry?'” According to Alba, the director ordered her to make her face “flat” during a death scene, and said that tears could be added later with CGI. The role earned her a Razzie Award nomination for Worst Actress.

Captain Phasma circumvents the issue of looking pretty on camera, as well as another common problem faced by so-called “strong female characters”: the debate over whether she provides a positive role model for young girls. As a captain in the villainous First Order army, her role is comparable to a character like Darth Maul. She’s not wholesome hero, but definitely a fun choice if you’re an 8-year-old kid playing Star Wars with your friends.

The Force Awakens still includes traditional heroines like Rey and Leia, but the presence of Phasma (and Lupita Nyong’o‘s alien character Maz Kanata) adds a satisfying new dimension to the Star Wars universe. We all need a bad role model, now and then.