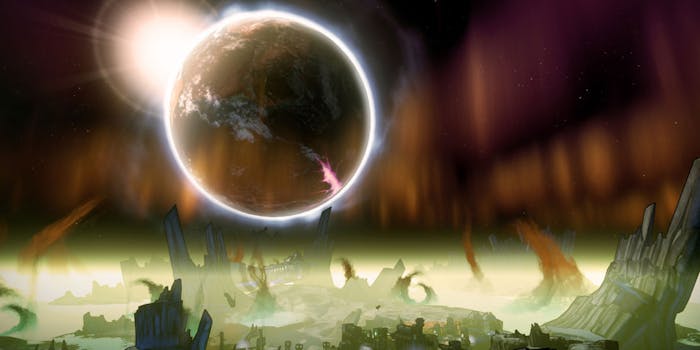 Borderlands: The Pre-Sequel would have been better off as an expansion

I started with a full group of four for my review playthrough of Borderlands: The Pre-Sequel. I ended the playthrough with a group of two, because we were enjoying the game in spite of itself.

I didn’t review Borderlands: The Pre-Sequel, which was developed jointly by Gearbox Software and 2K Australia, prior to its official release because its a game that begs to be shared with friends. Playing The Pre-Sequel alone felt alien and hollow after logging hundreds of hours’ worth of co-op between Borderlands 1 and Borderlands 2 with my group. It’s just not meant to be a solo effort.

This review, then, began around the same time any one of our readers might have begun theirs. The thoughts, feelings, and actions of my squadmates helped to shape and clarify my own feelings on the game. 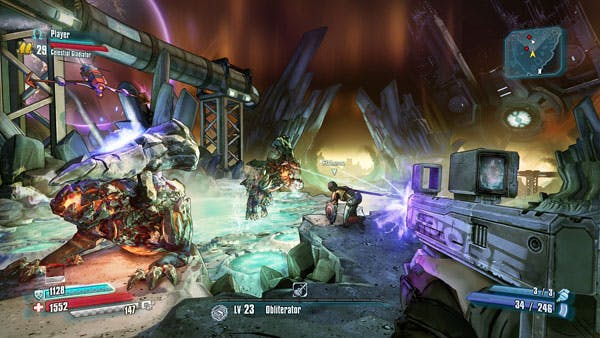 The Pre-Sequel might as well have been called Borderlands 2.5. The Pre-Sequel takes the Borderlands formula—a first person shooter with a million different kinds of guns, class-based RPG experience point and leveling systems, and zany writing—from the planet Pandora and stamps it on Pandora’s moon of Elpis. The Pre-Sequel uses low-gravity physics and oxygen consumption as the chief mechanisms to stand apart from the previous two Borderlands games.

Players use “Oz Kits” to breathe, for short-burst jump packs, and to launch ground-pound “SLAM” attacks. When players run out of oxygen they lose health until they stand over fissures in Elpis’s surface that spew oxygen, or pick up oxygen tanks dropped by enemies, or stand in oxygen-rich forcefield bubbles.

Low gravity and double-jumping turned much of our playthrough of The Pre-Sequel into a de facto platformer, and we died as a result of bad platforming skills as often as we died from standing in front of too many bullets. None of us were very happy about it.

We’d see the diamond shape on our maps designating where an objective was, and to be fair an “up” or “down” arrow tells players whether an object of interest is above or below them, but figuring out how to get there was an entirely different matter. There were extended periods where it felt like The Pre-Sequel ground to a screeching halt over our inability to figure out where the hell we had to go.

Difficulty navigating one of the game’s largest areas was responsible for why we lost the first member of our group. He kept wandering off to explore on his own, and figuring out how to get everyone back together was taking way too long, especially as we all died much easier when we were separated. After repeatedly crashing vehicles into ravines and rivers of lava in attempts to reconvene on the map, we decided that the three of us who were more used to playing together were better off continuing on our own. 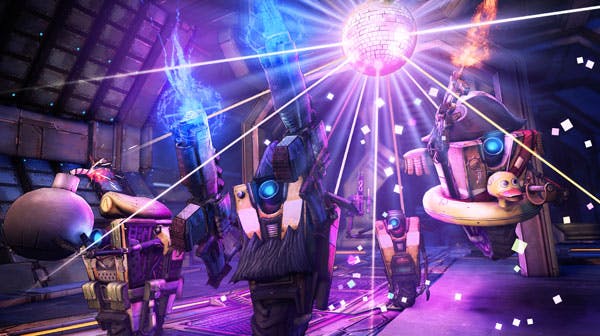 Where the low-gravity environment and oxygen mechanics were the first pre-release selling point for The Pre-Sequel, the second was the inclusion of a Claptrap as a playable character. Claptraps are loud, annoyingly optimistic uni-wheeled robots who excel at opening doors, and little else. Claptraps are the clown mascots for the series.

I personally like Clatraps, so that’s what I chose to play as, overriding three separate warnings about the character’s annoying tendencies before it locked in.

The other three classes in the game, Gladiator, Enforcer, and Lawbringer, primarily focus on defensive, support, and damage abilities respectively. Claptap’s special power is to run semi-random computer programs that take current conditions into account. He might buff everyone’s firing speed. He might make everyone’s weapons fire uncontrollably, which comes in handy at the right moment, but otherwise might eat up way more ammunition than it’s worth. He can spawn mini-Claptraps that fly around setting enemies on fire or that shoot rockets.

What I wish I’d been specifically warned about before making the choice to play as Claptrap is that as a robot who doesn’t require oxygen, he effectively misses out on a huge portion of the gameplay. I tried playing solo as one of the human classes for a little bit, and the experience was markedly different owing to the need for oxygen. I would have preferred to have been able to engage in that content, even if I did choose the annoying little robot. 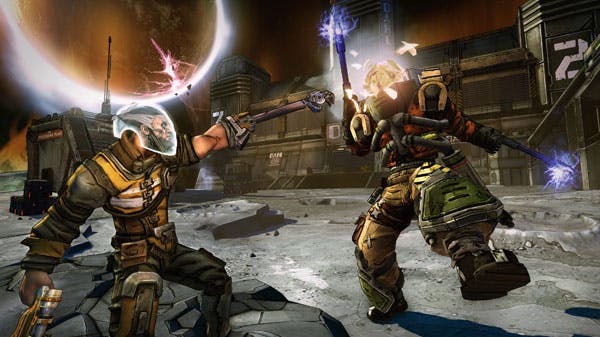 In Borderlands 2 you spend a healthy amount of time shooting killer robots designed by the Hyperion corporation, whose giant H-shaped space station hangs over the planet Pandora. The robots answer specifically to Handsome Jack, a charismatic villain whose jibes and jokes pepper Borderlands 2.

The Pre-Sequel is the story of how those robots came to be, and how Handsome Jack changed from a sympathetic corporate employee trying to save the moon of Elpis from being destroyed, into the villain in Borderlands 2. There are some very dark moments in The Pre-Sequel, including a female AI whose is forced against her will to corrupt her own program to run the new, killer robots, and firing a bunch of scientists out of an airlock on the suspicion that one of them might be a turncoat.

There are moments when the writing shines. Mr. Torgue, a purveyor of explosive weapons modeled after pro wrestling star “Macho Man” Randy Savage (he screams a lot) has a moment where he complains about being friend-zoned by a woman, and then immediately recognizes that “friend zoning” is an imaginary, misogynistic way of looking at a relationship.

Our heroes discover a ticked-off employee in a closet on a space station who is ranting about hating other people’s’ ambitions and accomplishments, and how he is willing to ruin the game of someone who ticks him off. It’s difficult not to read that as a commentary on anger-prone gamers, possibly even a comment on the Gamergate debacle taking place in video game culture when The Pre-Sequel was released.

By and large, however the writing feels weaker and a little forced compared to the strong writing in Borderlands 2, and it was responsible for how we lost the second member of our party. She had no attachment to either of the previous Borderlands games, and thus had no real context for Jack’s backstory, or when the minxy bar owner Moxxy and Vault Hunters Lilith and Roland, make appearances. Without attachments to those characters, The Pre-Sequel had little to offer her other than the challenge of navigating vertical levels, and swapping out hundreds of different guns over the course of the game.

Frustrated, our party member couldn’t get into The Pre-Sequel, so she left the group. We were down to two. And that’s when The Pre-Sequel really started to get fun, because the remaining pair of Vault Hunters had both sunk hundreds of hours into the previous two Borderlands games, and were as biased as can be. 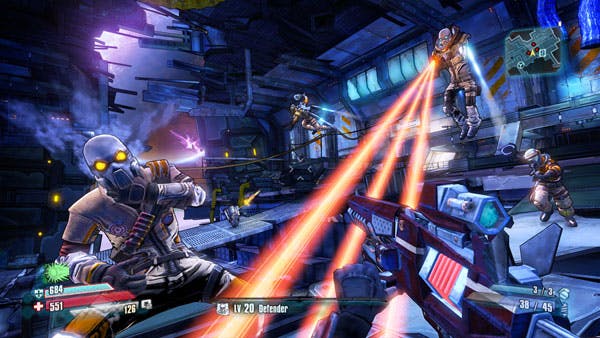 It should go without saying that the more you are into a game franchise, the more you should get out of the games. Once we were down to a pair of Vault Hunters who were willing to examine every nook and cranny in the game, Borderlands: The Pre-Sequel became a very different experience. The flavor and the story of a Borderlands game is largely contained within the side quests, which usually do not offer any rewards that make them worth pursuing for anything other than the story content.

The more we played The Pre-Sequel, the more dubious we became as to whether it warranted a standalone release. Oxygen consumption and verticality were the only fresh elements in the level designs. The new weapons classes—cryo and laser weapons—felt like additions to our arsenal that we could take or leave. The writing was full of references to the previous two games.

Where Borderlands 2 had at least 24 different locations prior to the release of the expansions, The Pre-Sequel only has 12. Quests in The Pre-Seguel can involve a lot of backtracking, which feels like the game is trying to make use of such a small amount of space. All of these elements and observations combined left us with a constant, nagging feeling that we were actually playing DLC that was left over at the end of development of Borderlands 2 and padded out to justify a separate, standalone release. Whether or not that is the case in reality does nothing to blunt the observation.

If you’ve upgraded to the PlayStation 4 or Xbox One, stepping back to a PlayStation 3 or Xbox 360 game right now is tough no matter what game we’re talking about. In the case of Borderlands: The Pre-Sequel, it’s especially difficult to make the recommendation unless you are a dyed-in-the-wool Borderlands fan. The Pre-Sequel might have been much more attractive were it a Borderlands 2 expansion, rather than its own game.

Disclosure: Our Xbox 360 review copies of Borderlands: The Pre-Sequel were provided courtesy of 2K Games.

All images via 2K Games.