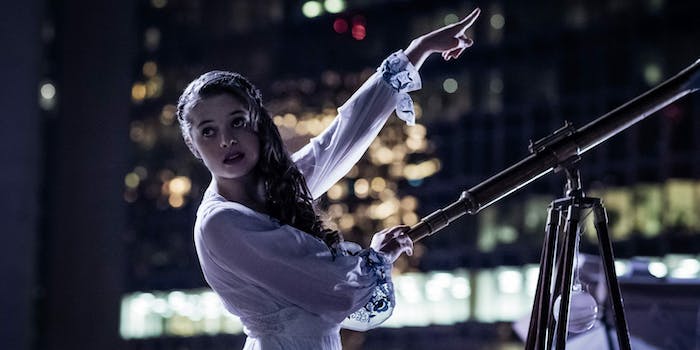 Sex, death, and religion. What more could you want from 'American Gods?'

If the second episode of American Gods was about storytelling, this week’s is about religion. With characters like Anubis and the Jinn, we begin to see how the old gods intersect with modern beliefs. And along with these religious themes, we also get a very explicit gay sex scene—a combination you only see on American Gods.

There’s a tendency among critics to describe American Gods as a Bryan Fuller show. He brought several cast and crew members from his previous work, and it’s easy to spot visual similarities with Hannibal. But co-showrunner Michael Green deserves equal credit, and episode 3 is where his influence makes itself known. While Fuller brings the sex and blood and visual style, Green brings the religion. Which is, you know, what American Gods is all about.

We begin with death. An old woman is preparing dinner when Anubis (Chris Obi) knocks at her door, and calmly informs her that she’s passed away. Despite her Muslim faith, her afterlife is governed by the ancient Egyptian stories she learned as a child. Anubis is here to weigh her heart in judgement, and usher her into the next plane of existence. It’s a gorgeous scene, traveling from her apartment to a dreamy desert landscape by climbing a seemingly infinite fire escape staircase to the stars.

In my spoiler-free review, I mentioned that American Gods makes fantastic use of the sky. Stormclouds tower in the background of otherwise normal scenes, exaggerated with CGI to like 19th century apocalyptic art. Episode 3 indulges in Anubis’s starlit desert and a massive thunderstorm in Chicago, where Shadow and Mr. Wednesday are staying with Czernobog and the Zorya sisters. Shadow meets the young Zorya Polunochnaya in a dream, where she watches the stars through a telescope and plucks the moon from the sky like a coin trick. At the same time, Wednesday and Zorya Vechernyaya step outside into the storm, where Verchernyaya remarks that she can taste Odin on the rain.

These old gods are elemental, coming from a time when weather was lethal, inexplicable, and awe-inspiring. To make that clear onscreen, American Gods spent a buttload of cash on CGI clouds and lightning bolts. It pays off. There’s a real sense of power and weight to the gods in this episode, starting with Chris Obi’s calm and regal performance as Anubis.

How American Gods gets religion

Kings isn’t a Christian show in the sense that, say, 7th Heaven is a Christian show. It uses the Bible as a literary and mythological source, with an Old Testament God sharing his views through signs and portents. This god chooses a king by sending a flock of butterflies to land on his head like a crown, and signals his disfavor by cursing someone with bad luck. The show is full of characters who interact with God on their own terms, and it predictably failed to find an audience on NBC in the late 2000s. American media is saturated with Christian imagery and politics, but network TV dramas are wary about backlash if they examine Christianity in a critical or experimental way. Especially if they portray Bible stories in a fantasy context.

Eight years later, Green’s interest in religion found a new home with American Gods. “There are too many shows [in general], and not enough talking about religion and few celebrate religion,” he told Collider. He described American Gods as a show “about faith and religion in America, that enjoys religion and celebrates it, and that thinks about it seriously.”

He’s an ideal fit for Neil Gaiman, who often writes about faith and religious storytelling, and how gods are created by their believers. This episode included our first mention of Jesus, with Mr. Wednesday blithely explaining the different versions: brown Mexican Jesus, black African Jesus, white American Jesuit Jesus, and so on. Thanks to their different stories and traditions, they’ve split into separate entities like the cultural chasm between Adam West’s Batman and the Ben Affleck version with machine guns on his car.

The theme of belief continued into Shadow’s scenes, where he reluctantly follows Mr. Wednesday’s plan to rob a bank. It’s our first real look at one of my favorite elements from the novel: Wednesday’s role as a con artist.

To rob the bank, Wednesday persuades people to hand him bags of cash because the deposit box is “closed.” It’s a neat little scam that relies—like all confidence tricks—on the blind faith of its victims. It’s a cynical interpretation of his nature as a god. Shadow’s own belief plays a more explicit role, as Wednesday asks him to wish a snowstorm into existence. It’s our first clear-cut sign of belief as a tangible force, an idea that permeates the work of Neil Gaiman and his longtime friend Terry Pratchett.

Our second godly interlude introduces the Jinn (Mousa Kraish), a centuries-old entity with eyes of fire. We meet him via Salim (Omid Abtahi), an immigrant trying to make a living as a salesman in New York. After a day of failure and frustration, he hails a cab driven by the Jinn, whose true identity becomes clear when Salim spots the flames behind his dark glasses. “If I could grant wishes, do you think I’d be driving a cab?” asks the Jinn, bitterly. Recognizing a kindred spirit, Salim tentatively reaches out and they end up having sex up in his grimy hotel room, the camera gazing worshipfully at the Jinn’s body like a burnished statue.

You get the impression that American Gods‘ creators are very excited to escape network TV content rules. Blood sprays across the screen, Shadow says “fuck” about 10 times per episode, and the show reveled in Bilquis devouring a man with her vagina. That being said, American Gods isn’t as gratuitous as Game of Thrones‘ “tits and dragons” ethos. (It also achieves a healthier gender parity for nude scenes, featuring an impressive volume of penises, erect and otherwise. How could I forget the tragicomic visual punchline of the dick pic last week?)

Salim and the Jinn’s sex scene is a rare moment of tenderness in show that emphasises wit and atmosphere over emotional storytelling. The two men bond over their unhappy lives, sharing a night that elevates them both through sincere pleasure. Afterwards, Salim escapes his unsatisfying career by trading places with the Jinn, becoming a cab driver and leaving his old identity behind. It’s essentially the opposite of Bilquis’s carnivorous sex scenes. Two individuals form a personal connection, exchanging things the other needs. Both want sex, but Salim also leaves with a better life, and the Jinn leaves with a reminder of his old power, reinforced by Salim’s belief.

As I mentioned last week, Slavic mythology sources are pretty thin. So much so that when Gaiman invented Zorya Polunochnaya for American Gods, he accidentally tricked some people into believing she was a real goddess.

Her sisters Zorya Utrennyaya and Vechernyaya originated in Slavic myth, a pair of deities representing the sunrise and sunset. By adding Polunochnaya, Gaiman transformed them into a traditional trio of maiden, mother, and crone. Unfortunately for anyone who cited Polunochnaya in their academic texts, Gaiman actually named her after the Iggy Pop song Sister Midnight.

Of all the gods we’ve met so far, Czernobog and the Zorya sisters are Wednesday’s oldest friends. Russia and Scandinavia are geographically close, and as we learn this week, there’s some overlap between their mythologies. The sisters watch the stars because one day, the great beast of Ursa Major will break free from his chains and consume the world. A similar story to the Norse myth of Fenrir, Loki’s wolf son who was chained up by the gods, but will eventually escape to kill Odin during Ragnarok. Yet another hint at the apocalyptic heart of American Gods.

While Czernobog and the Zorya were forgotten by the immigrants who brought them to America, the Jinn had a different but equally unpleasant experience. These days, everyone knows what a genie is, but the term was bastardized to the extent it no longer refers to him. Working as a cab driver and nursing memories of a thousand-year-old city in the Arabian peninsula, the Jinn can be read as an allegory for cultural appropriation.

Jinns appear throughout Islamic and Arabian mythology, as supernatural spirits associated with fire. They exist alongside angels, but like the other entities we meet in American Gods, they don’t fit into binary moral roles. They’re not wish-granting genies, an idea popularized in the West by One Thousand and One Nights. So, like the stark contrast between Mr. Wednesday and the fatherly Odin of Marvel’s Thor, there’s a complex lineage leading from the lovable blue Genie in Disney’s Aladdin back to the embittered cab driver of American Gods. A man with fire in his body and relatable human desires, long forgotten by the rest of the world.