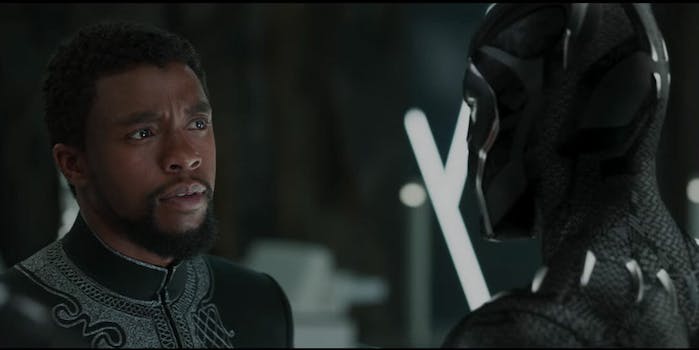 'Black Panther' could change everything, and it should.

You’d have to be living under the Great Mound itself to not know that Black Panther came out this week and that people are excited. Like, really, really excited. All over the world. To be a part of the fanfare, I drove all the way from Chicago to Columbus, Ohio, to meet up with some black, nerdy colleagues.

About an hour into our post-Black Panther conversation I had a realization. We’ve never been here before.

There were so many characters I could identify with and examine: the newly appointed king questioning his role, the outsider looking to bring the best out of a homeland he never knew, the tech-savvy teenager who questions tradition, the wise queen mother, the jaded best friend, the loyal soldier. The list goes on far longer than run-of-the-mill Hollywood tokenism would normally allow.

Far too often, I’ve had to latch onto the sole person of color in movies or TV shows or try to see myself in people who look nothing like me. Black Panther presented an alternative. Erik “Killmonger” Stevens uses the same words I do with my friends. Nakia and I share a similar view on how urgent it is to improve the lives of black people across the globe. That’s part of the magic of this movie.

There was enough representation here that I could openly dislike certain characters without carrying the burden of defending them against biases more based on the color of their skin than their actions. That’s never happened before. At least not on this scale.

Of course, you could throw a multicultural cast on screen, but if the story doesn’t dig deep and make you ask questions, it’s not going to make an impact. Black Panther asks a lot of big questions.

Was Wakanda in the wrong for spending centuries hiding in prosperity while so many other people of African descent battled horrific hardships? What lines would be crossed if Wakanda did decide to intervene? The complicated conflict between T’Challa and Killmonger in Black Panther offers an opportunity to confront these questions while depicting black people in believable ways.

After all of this examination, I found myself wondering “…is this how straight, white guys feel all the time?” My guess would be that they’re so used to seeing their own point of view on screen, it’s not even noticed.

I was born and raised in Chicago and am so far removed from the past that I couldn’t begin to tell you what parts of Africa my family came from. But this film brought it all together and didn’t pull any punches when it came to addressing the history of people of African descent. Michael B. Jordan’s Killmonger—already a fan favorite—especially held T’Challa accountable for his ancestors lack of involvement in world affairs.

In their conflict, I heard echoes of conversations that I’ve regularly had with friends and family. Seeing these sentiments on screen only further proved that this film was made with us in mind.

Black Panther was most recently tracked to potentially make $200 million domestically over the holiday weekend. That dwarfs Deadpool’s impressive $152.2 million record for the same timeframe. A significant portion of that response can be chalked up to the Marvel machine doing what it does best. But another factor is at play here as well.

When Wonder Woman was set to be released, it was only expected to open with a $65-75 million weekend. It shattered expectations and brought in $103.3 million. Hollywood seriously underestimated what a rallying point the film would be for women and their allies, who found it refreshing, relieving, and straight-up inspiring to see a woman in a role almost exclusively occupied by straight, white, male heroes. You can expect Black Panther to become a similar cultural touchstone, possibly on a much grander scale.

The optimist in me hopes that the success of Black Panther will leave film executives and studios with no excuses when it comes to opening more avenues for writers, directors, and actors of color. Not as an experiment that’ll inevitably end when one show or another flops. Representative entertainment isn’t a fad. It’s a brighter future. And Black Panther could be a moving force to push us closer to it.