Photo via nicolassolop.com (CC BY 2.0)

The 11 best geek culture podcasts to listen to right now

There are so many geeky podcasts that sometimes it's hard to keep track. Here are 11 of the best.

There are so many great podcasts now that it’s hard to keep track. Welcome to Night Vale and The Thrilling Adventure Hour are the obvious choices if you have any interest in audio fiction, but it’s a little harder to pick out the best fandom talk shows and geeky discussion podcasts. That’s why we’ve been taking a careful look at what’s on offer, and have whittled the many options down to a streamlined list of 11.

Some of these are fandom-specific (very specific, in the case of cartoon Batman psychoanalysis podcast The Arkham Sessions) while others are more general, but all of them are definitely worth a listen.

Their podcasts cover everything from decades-old fandom discussions to Sherlock TV fan events, and have developed a dedicated following of their own. They’ve even published a book: The One Fixed Point In A Changing Age: Essays on Sherlockiana By Online Fandom.

Tor.com’s in-house podcast is dedicated to conversations about science fiction and the sci-fi/fantasy community, and often brings in well-known authors as guest hosts. This show doesn’t require you to be a regular listener, because some weeks the episode will be dedicated to an audio reading of short fiction, while the next week is a discussion of something like The LEGO Movie, the Hugo Awards, or superhero TV shows.

3) Rachel and Miles X-Plain the X-Men

The title says it all, really. Longtime comic book fans Rachel and Miles discuss the delightfully convoluted history of the X-Men, in a way that is equally interesting for experts and total newbies alike. We interviewed them last year when X-Plain the X-Men was just starting to take off, and since then they’ve gone semi-pro through Patreon and merchandising. 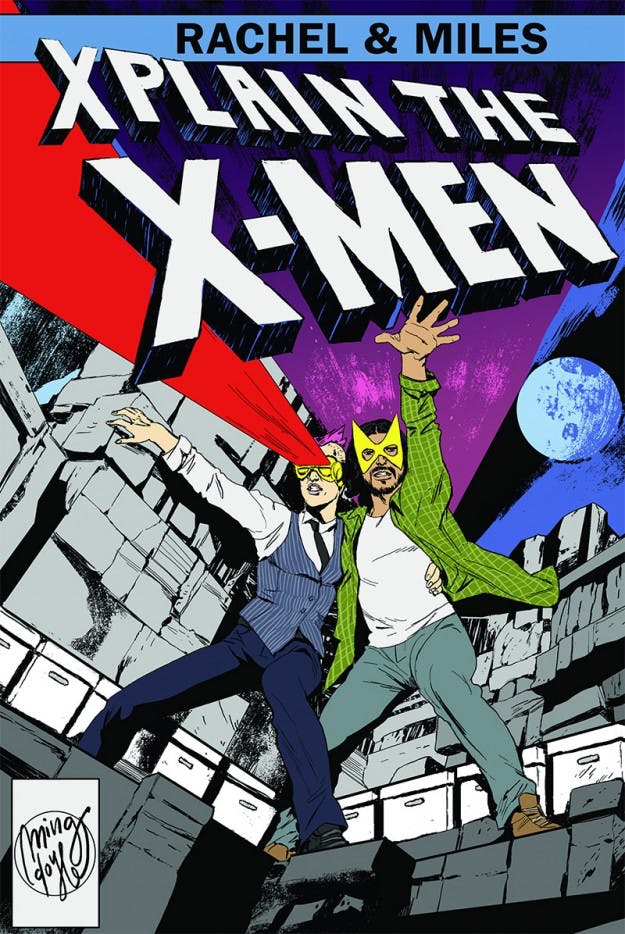 This is the biggest podcast on the list, attracting celebrities like Joss Whedon, Benedict Cumberbatch, Gillian Anderson, and William Shatner, along with well-known screenwriters, comedians, and comic book creators. The format is like a casual talk show hosted by the Nerdist’s Chris Hardwick, and episodes can often be more than an hour long.

There are plenty of hidden gems in the Nerdist’s lengthy back-catalogue, such as the episode where Charlie Hunnam (Pacific Rim) talks about his obsession with writing a historical film about Vlad the Impaler, or the one where Tom Cruise narrates an impromptu autobiography and repeatedly assures us that he “loves movies” in increasingly over-enthusiastic tones. Check the episode list for your favorite geek-culture celebrities; the resulting interview is certain to be far more satisfying than your average YouTube soundbite or magazine article.

This one only started a few weeks ago, but it’s a must-listen if you’re in need of reliable media recommendations. Co-hosted by Renay from Ladybusiness and Ana from the hugely popular Book Smugglers book review blog, this podcast combines fandom-related debate/criticism with a whole slew of recommendations for upcoming TV shows, comics, books, and movies. Fangirl Happy Hour is especially good if you’re looking for books and movies with diverse protagonists or creators.

Shoutout to our awesome artist who did AMAZING work for us! Thanks, @itsjustira pic.twitter.com/LFTP5rZAbd

The ultimate Game of Thrones podcast. The show is divided between TV recaps and analysis (when GoT is on air) and conversations about the books (during the off season), but don’t be too intimidated by their obsessive attention to detail. Two of the hosts are experienced A Song of Ice and Fire readers while the other two have never read the books before, making for an accessible balance of opinions. After more than 250 episodes they still have something to talk about, which is impressive in itself.

7) This week in Marvel’s Agent Carter

This official Marvel podcast acts as a weekly behind-the-scenes commentary for each episode of Agent Carter. You can listen to it like a regular podcast, but we recommend cueing up the latest Agent Carter episode on iTunes (or Hulu, or ABC Go, or wherever) with the sound muted, and listening to the podcast while you rewatch.

Episode 1 is hosted by screenwriters Christopher Markus and Stephen McFeely, who co-wrote both of the Captain America movies and Agent Carter‘s pilot episode, and who obviously have plenty of insight into how the show was made. Later episodes are hosted by other members of the Agent Carter creative team.

8) Not Another Teen Wolf Podcast

Even if you don’t enjoy Kevin Smith’s filmography, it’s worth checking out his hilarious public speaking and podcast work. The Smodcast can be patchy in that some episodes are just Smith and his producing partner Scott Mosier chatting about random crap, but there are plenty of great interviews in there as well. For example, there’s this lengthy interview with Neil Gaiman and Amanda Palmer, or this 2011 episode with Teen Wolf star Dylan O’Brien. (Seriously, that last one is awesome. This was back when Teen Wolf was first taking off, and Kevin Smith spends half the interview praising a baffled and slightly star-struck young O’Brien for his unexpectedly incredible natural talent as an actor.)

The Slash Report, or /report, is a talk show all about slash fanfic. It’s hosted by a team of fanfic writers and has been running since 2011, so you can expect plenty of expert (and hilarious) slash-related content, including fic recommendations, movie reviews, fandom primers, interviews with other writers, and discussions about slash fandom in general.

As the title suggests, this one is about Batman. Specifically, it’s an entire podcast dedicated to psychoanalyzing characters from Batman: The Animated Series. It’s hosted by clinical psychologist Dr. Andrea Letamendi and Bryan Ward of the Shout! Factory home video company, who somehow made sure that the (bizarre yet fascinating) premise of the podcast would be accessible to anyone. Yes, even people who have never seen an episode of the animated series.