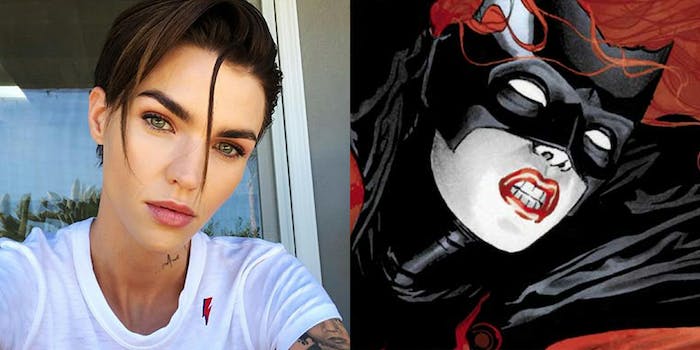 Ruby Rose is your new Batwoman

She'll be joining the Arrowverse later this year.

Batwoman, who also goes by the name Kate Kane, will show up in a crossover between Arrow, The Flash, Supergirl, and Legends of Tomorrow, which all exist in a collective universe called the Arrowverse. (Black Lightning, another CW superhero show, exists outside of that TV universe.)

But a standalone series starring Rose as Batwoman is also in the works. As first announced last month, Caroline Dries (Smallville, The Vampire Diaries) is writing the show with Arrowverse architect Greg Berlanti on board to produce. Early reports promised that Batwoman’s sexuality would be included in the show, and reports indicated that the CW wanted to cast a lesbian actress to play Batwoman (Rose came out at age 12 and identifies as genderfluid).

While still in the early stages, the potential was monumental. If Batwoman was picked up to series, it would be the first live-action superhero TV show starring an LGBTQ superhero after several of the Arrowverse shows include LGBTQ characters.

Rose, who’s currently promoting The Meg, hinted to her followers that she had something big about to be announced Monday night.