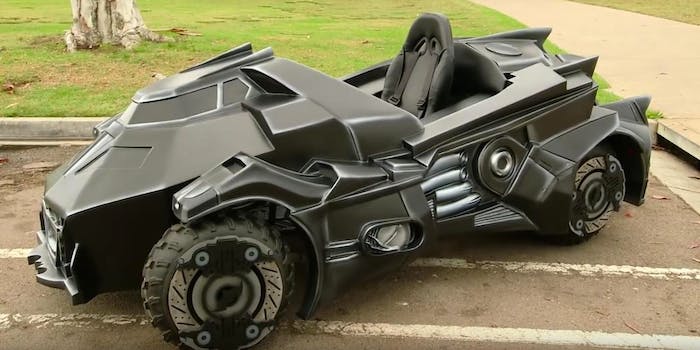 Thanks to a contest held by PlayStation, one lucky fan of the video game Batman: Arkham Knight didn’t have to worry about needing Bruce Wayne’s resources to lock down a Batmobile. Instead that fan received an Arkham Knight Batmobile custom made for him by the talented team of Super Gamer Builds on AWE Me’s YouTube channel.

The episode shows how a common go-kart was transformed into this superhero’s favorite mode of transportation. The Batmobile was sculpted out of foam which was used to make a mold for the creation of the fiberglass outer shell. It took the team a total of seven weeks to complete the project.

While it may not be as big as the real thing, this is still a very impressive DIY version of the Arkham Knight Batmobile. Plus the smaller size will surely make it easier to store and drive around without making anyone worry that a superhero is actually chasing villains in town.