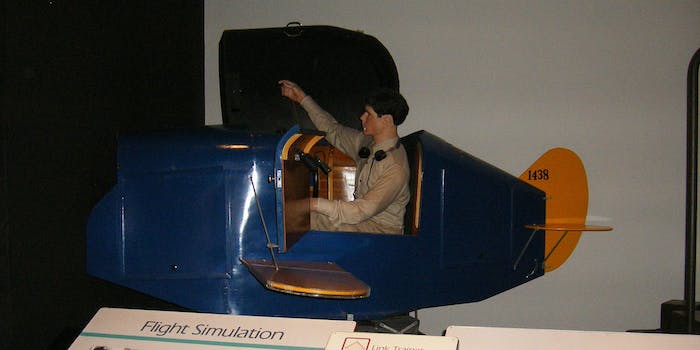 Only a homemade spacecraft simulator could ignite our primary jealousy sequence.

A dad with serious engineering chops built his kids a spacecraft simulator so awesome that even cynical adults would have a hard time trying not to hop inside.

Jeff Highsmith writes for Make magazine that the idea for the simulator grew out of a previous project, the mission control desk. And so, he said, “Over the last four months, in scraps of time between other roles, I built a spaceship for my younger son’s room.”

The completed simulator features a remotely-operable robot arm, a payload bay containing toy satellites, a bass shaker to simulate the firing of the craft’s rockets, and a control panel with authentic NASA sound effects.

The spacecraft simulator is connected to the mission control desk through an intercom system, which Highsmith said has led to some awesome and educational play sessions: “This allows the child sitting at Mission Control to talk to the child in the spaceship, directing them through the various steps of the mission, such as launch, payload deployment, spaceship repair, lunar landing, re-entry, and recovery. Each time they play, I hear them picking up more space terminology and getting better at instructing each other.”

In case you want to design a simulator like this yourself, Highsmith has posted the source code for the electronics console on Github.

“This is not a game itself that can be won or lost, just a fancy prop for my boys to use with their own blossoming imaginations,” Highsmith wrote. “Rather than limit them to what I can think up in terms of play, I want to give them room to think up things themselves.”