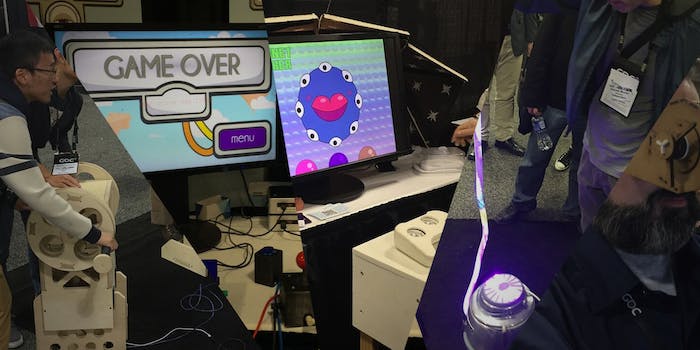 6 incredible games from the mad scientists of game controllers

Alt.ctrl.GDC hosts another round of awesome DIY games and game controllers.

You may think that virtual reality was the coolest tech on display at the 2016 Game Developers Conference, but a collection of indie game developers and their homemade technologies disagree.

Every year the alt.ctrl.GDC exhibit shows off a large collection of indie games that are all designed around the concept of using a unique controller to play the game. Sewing machines, old television sets, and telephone boxes become peripherals in experimental games that investigate new concepts.

We toured the exhibit and culled out some of the best games (in no particular order) for you to check out. Crank Tank was developed by three students at the Parsons School of Design in New York.

Two players have to coordinate and spin a pair of custom crank-controllers to control their tank and find and destroy the enemy base. It replicates the way real tanks work—you move the right tread backwards in order to make a clockwise turn, for example. Disruption is a two-player competitive game about one player trolling the other, created by a group of hackers from the Hull University computer science department.

The player on the left plays a side-scrolling shooter using an arcade-style joystick and a single “fire” button, and tries to earn points. Each of the five possible inputs—left, right, up, down, and shoot—each has its own wire tied into a junction box.

The player on the right plays a Pac-Man-like minigame where the goal is to avoid enemies. If the player is successful, they kill one or more of the left hand player’s controls. That might make the “left” movement impossible, for example.

The player on the left then has to unplug the matching wire from the junction box, find a new input that’s live, and continue playing the game. Disruption is absolutely devilish. It’s both frustrating and fun as hell. Hello, Operator! was created by Mike Lazer-Walker, a researcher in the Playful Systems group at the MIT Media Lab. It’s a simulation about being a telephone switchboard operator in the 1930s and learning how to handle the flood of calls.

Lazer-Walker built the game out of a vintage telephone switchboard, used in 1927 at the Mead Paper Mill in Chillicothe, Ohio. It cost him $400 on eBay. “It cost more to ship it than to buy it,” Lazer-Walker said.

You have 10 different sets of connections to manage. An orange light on the board means that someone is calling, and you insert the first plug of the pair to speak to the caller.

The caller tells you who they would like to speak to, and then your job is to insert the second plug into the intended call recipient’s line and flip a switch to put the call through.

Trying to close down finished calls and manage the flow of new calls will give you an appreciation for what telephone operators actually had to go through almost a century ago.

One of the coolest things about Hello, Operator! Is that it uses all the vintage switchboard’s original wiring, plus some custom wiring to the game’s chipboards. All the lights on the front of the switchboard were replaced with LEDs. Otherwise, the switchboard is entirely as it was in 1927. To someone viewing the game from the outside, the screen looks white. The person wearing the HMD is looking at a maze. In order to find doorways, exits, or different parts of a platform that runs across a void in the level, the Palimpseste player has to rotate through the color filters in order to see different parts of the level. If there were a “most bizarre game of GDC 2016” award, developer Frank DeMarco, from the Mouth Arcade indie studio based in New York, may have taken it home with Planet Licker.

The player uses a custom controller that holds three cups of flavored ice. Their avatar in the game has three different-colored arrows that correspond to three possible directions of movement, and each arrow corresponds to one of the flavored ice cups on the controller.

By licking the appropriate flavor on the controller the player moves the avatar to different planets. The avatar then licks away the core of the planet, and the player earns points. Suck My Rainbow was developed by Triband, an indie studio based in Copenhagen that specializes in creating games and interactive vacuum cleaners.

The vacuum cleaner in Suck My Rainbow wants you to suck up a specific color. You find the color, hold the vacuum tube up to that color, and a scanner inside the tube reads the color. When you match the color, the lights along the tube glow with that color as the vacuum sucks the color up, and then the lights flash, indicating that you won.

We had trouble finding green to scan. The developer’s sneakers did the trick. When it came time to find purple, it turned out that dyed hair worked just fine!