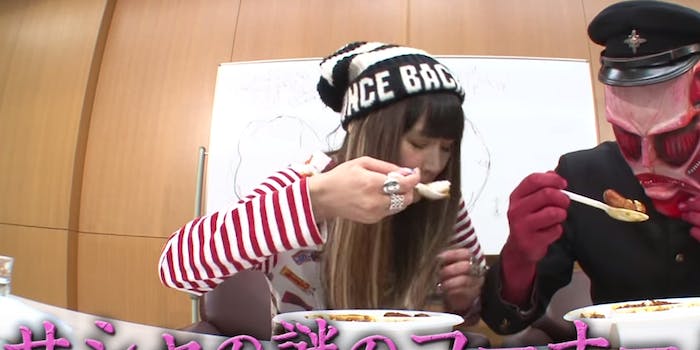 Deconstructing the first looks from live-action ‘Attack on Titan’

Yes, this clip includes a scene with a real, live Titan.

The first teaser from Japan’s live-action Attack on Titan adaptation has just made its way onto YouTube. Inspired by the massively popular manga series by Hajime Isayama, the live-action franchise consists of two movies due out later this year.

The clips aired on a Japanese morning show, which is why there are so many graphics and voiceovers in this video. It isn’t a full trailer, but we do get to see a few key characters and scenes that Attack on Titan fans are sure to recognize.

First, we’re introduced to the walled city, plus three characters whom we assume are the heroes Eren, Mikasa, and Armin. Then the teaser launches straight into Attack on Titan‘s apocalyptic trail of death and destruction, including a couple of glimpses of live(ish)-action Titans.

We also spotted a few shots of the Survey Corps, including Hange looking characteristically gleeful. Don’t worry if you don’t recognize anyone else though, because the movies are making some significant changes to the lineup. Several of these characters never appeared in the anime or manga at all.

This adaptation looks pretty different from the anime, which many fans interpret as taking place in a Germanic culture in the 18th or 19th century. These clips show a more ambiguous setting, ranging from relatively modern buildings to a kind of post-apocalyptic historical aesthetic. Plus, obviously, all of the actors are Japanese.

Aesthetic differences aside, most fans will agree that what really matters is the tone. Attack on Titan is a viscerally horrifying story about flesh-eating giants trying to destroy the last surviving remnants of humanity. If the movie can capture the horror and suspense of the original, then we’ll be happy. Happy, and scared, and maybe a little nauseous.