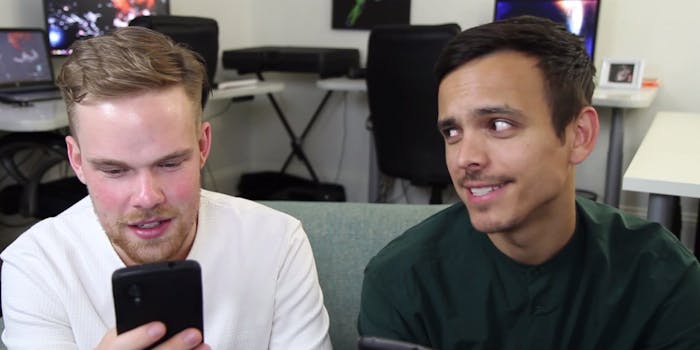 Watch the whole video, and renew your faith in the Internet's science community.

They’re the creators of the popular YouTube channel AsapSCIENCE, which boasts over 2 million subscribers. But as they revealed today in an endearing video in which they came out “again,” they’ve also been romantic partners for seven years and counting.

Citing homophobic remarks they’ve received over the years, Moffit and Brown took a break from their typical science-education format to tackle a much more personal subject: homophobia and the need for visible queer role models.

The duo opened with a hilarious read-aloud of some of the milder, and occasionally funny, comments their videos had received over the years. Most of the comments focused on their perceived effeminacy or queer identity, not the content of their videos. Although Moffit and Brown had been open about their relationship in the past, they had never officially come out online.

“Because we’ve never officially come out online, when reading [the YouTube comments], it really reminded us of what it felt like to be in early high school before we came out,” Brown commented.

They also noted that on YouTube, queer members of the vlog community are scarce, especially in the science and education community. Moffit pointed out as well that women in science and tech seemed to face the same derailment online that gay men do, and that the majority of the pejorative comments they received as men are rooted in sexism. These are both reasons, they claim, to encourage diversity and visibility online.

Watch the whole video, and renew your faith in the Internet’s science community.