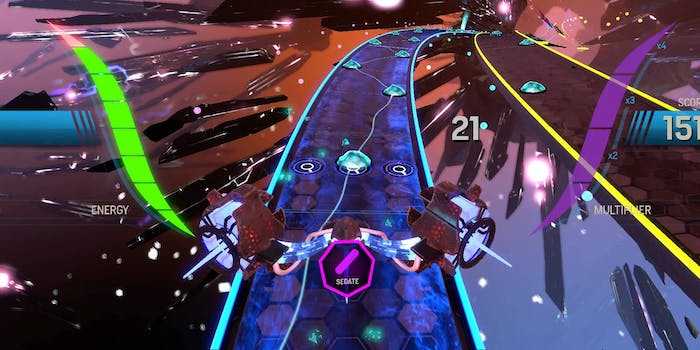 The launch trailer for Amplitude is a psychedelic music trip

After a Kickstarter that squeaked out funding in the last 24 hours of its campaign, Amplitude is now only a month away from release. After a delay this past July, it seems that the game is now close to complete, and a new launch trailer has hit the Internet.

Amplitude is a music-rhythm game and a reboot of the critically adored PlayStation 2 game of the same name. It wasn’t a huge commercial success, but has since become a cult classic. Harmonix, the same team behind Rock Band, Kickstarted the game in May of 2014. Things were looking bleak as it struggled to make its goal. When news started to spread that Amplitude was in danger, gamers stepped up to make sure the game was funded.

Music games have seen a bit of a resurgence this past year. Not only did we get a new Rock Band and Guitar Hero, but we also got Persona 4: Dancing All Night, Hatsune Miku: Project Mirai 2, Superbeat: Xonic, among many others.

Amplitude is set to launch on Jan. 5 for PlayStation 4.