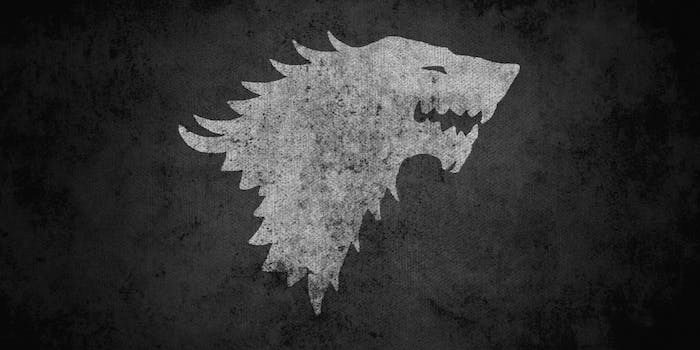 ‘The Winds of Winter’ will come out in 2016, according to one of its editors

Fans are taking it with a grain of salt.

There’s still no official release date for The Winds of Winter as the sixth season of Game of Thrones continues filming, but it could come as early as next year, according to the Spanish editor of A Song of Ice and Fire.

The Spanish Game of Thrones fansite Los Siete Reinos is reporting that Alejo Cuervo, who is an editor at Ediciones Gigamesh (which owns the rights to publish ASOIAF in Spanish), recently did an interview with El Mon RAC1 to talk about Game of Thrones as well as The Winds of Winter. Within the interview, which is in Catalan, Cuervo discusses recent filming in Girona and even dropped some hints about when the next book will come out.

Not only will The Winds of Winter come out in 2016, Cuervo says, the Spanish version won’t be delayed too much because of translation.

Radio Host:  The sixth book will be?
Cuervo:  It is expected next year.
Radio Host:  In English, but in Spanish when will it be?
Cuervo:  We have been promised the manuscript in advance of the release in English which we will translate, there won’t be a big difference.
Radio Host:  But you are equally sure it will be next year?
Cuervo:  Well, let’s see, confidant…but a meteor could fall.

This isn’t the first time we’ve heard information from editors regarding the release of The Winds of Winter. Back in January, George R.R. Martin’s U.K. editor confirmed that it was not on the publishing schedule for 2015 back in January, which led Martin to explain that he doesn’t schedule the publication of his books until the date is set in stone.

The fandom, already having to wait more than four years for a new book in ASOIAF, is taking this with a grain of salt—although some are already getting hyped for the potential release. The r/asoiaf subreddit, knowing Cuervo’s position and authority, is cautiously optimistic.

Hmm, GRRM's Spanish editor is saying spring 2016 for The Winds of Winter. Only 5 years after Dance with Dragons.

Martin’s estimation of his own progress supports Cuervo’s claims. He said himself back in April that he would like to have The Winds of Winter published before Game of Thrones’s sixth season starts next spring, telling Entertainment Weekly that it “has been important to me all along.” Martin has even turned down multiple convention appearances and did not write an episode for Game of Thrones season 6 in order to write The Winds of Winter, which he also did back in season 5.

But ultimately, we won’t have a definitive answer on when The Winds of Winter will be published until we hear it from Martin himself. He reiterated this point back in December after fans speculated a release date announcement following some themed tweets that went up on his Twitter account.

Look, I’ve said before, and I will say again, I don’t play games with news about the books.  I know how many people are waiting, how long they have been waiting, how anxious they are.   I am still working on WINDS. When it’s done, I will announce it here. There won’t be any clues to decipher, any codes or hidden meanings, the announcement will be straightforward and to the point. I won’t time it to coincide with Xmas or Valentine’s Day or Lincoln’s Birthday, the book will not rise from the dead with Jesus on Easter Sunday. When it is done, I will say that’s it is done, on whatever day I happen to finish.
I don’t know how I can make it any clearer.

Update 10:15pm CT, Sept. 15: After a fan asked Martin about Cuervo’s comments on a recent LiveJournal post Tuesday, Martin only had this to say: “It will be finished when it’s finished.” 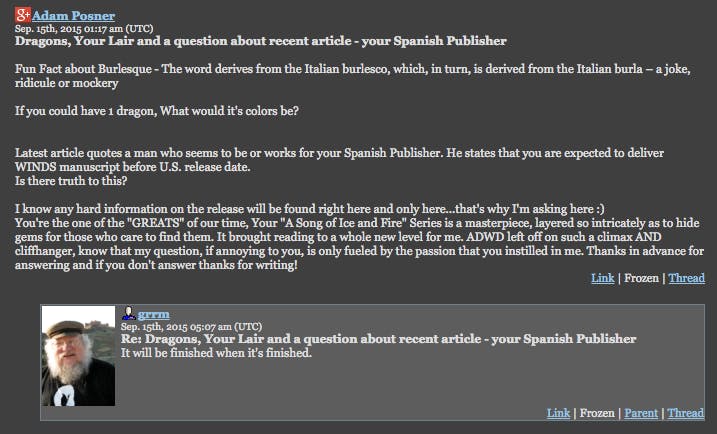 H/T Watchers on the Wall | Illustration by Max Fleishman