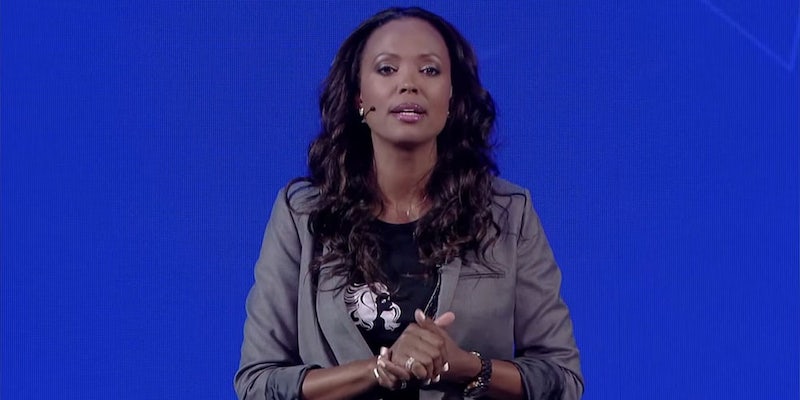 Aisha Tyler has some choice words for girl-hating gamers

The actress calls out E3 attendees in particular.

The fake geek girl myth strikes again—but this time, the target is a celebrity, and she’s having none of it.

Aisha Tyler has hosted Ubisoft’s annual press conference at the Electronic Entertainment Expo since 2011. She’s an avid gamer, and on a recent segment on NPR’s All Tech Considered podcast, Tyler discussed her irritation with having her gamer credentials questioned. She also pointed out the hypocrisy of a formerly ostracized caste of people—i.e., nerdy white boys who play video games—turning around and attempting to ostracize women from video game culture.

Tyler’s work with Ubisoft is how she is usually associated with video games by casual game industry observers. Core gamers, however, might remember Tyler from a video game intro segment back in May 2010. Halo: Reach was the last game in the Halo series from franchise creators Bungie, and Tyler provided an introduction to the multiplayer beta. Tyler gave helpful tips on the maps, play directions for available game modes, changes to the Halo control scheme for Reach, and new game mechanics.

The Halo franchise is the poster boy for online console multiplayer gaming, and a game studio like Bungie could have its pick of potential hosts for that sort of segment. To question Tyler’s gamer bona fides in light of that video is eyebrow-raising in and of itself.

Still, people have, and Tyler spoke with NPR reporter Laura Sydell at E3 this year about her response to such criticism. Tyler’s comments begin at 3:05 in the segment.

“To come and tell me that something that I’ve lived with and loved since I was a little kid is illegitimate, that I’m lying about it? I’ll literally tell somebody to their face, ‘F**k you,’ and I’ve done it on this floor,” she said.

Tyler was referring to the E3 show floor, which was filled with booths showcasing the hottest core games currently in development or that will be released in the very near future.

“This is a group who has been excluded,” Tyler said, referring to the segment of the gamer audience that fits the stereotype of the white, closeted, nerdy loner, “and now they’re turning, and they’re excluding.” The abuse and vitriol casually thrown at female players in open chat rooms, especially in online first-person shooter games, is legendary.

“And the irony and hypocrisy of that is extraordinary,” Tyler added, “so I do a lot of calling people on that. ‘So no one let you into your club, and now you have one, you don’t want to let anybody else in. And you know that you’re just being full of it right now.’”