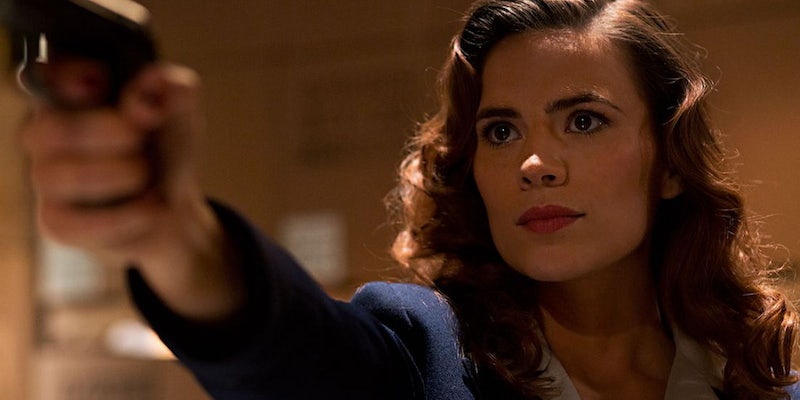 Just how many stunt men has she kicked in the junk, now?

Agents of S.H.I.E.L.D. is on hiatus until March, so now it’s time to turn your attention to Marvel’s Agent Carter. And before you do anything else, you need to start following actress Hayley Atwell on Twitter.

Atwell played Agent Peggy Carter in both of the Captain America movies, a solo short film, and a couple of flashback scenes in Agents of S.H.I.E.L.D. The character proved so popular that Marvel decided to give her her own TV series, a post-war espionage drama about the origins of S.H.I.E.L.D. The trailers look awesome, but perhaps even more reassuringly, the show’s lead actress seems to know exactly what fans want: outspoken feminism, behind-the-scenes photos, and tweets about Atwell/Carter beating up stunt men. (On that final point, she delivers in abundance.)

The show’s first season is an eight-episode miniseries co-starring Howard Stark (Dominic Cooper) and his butler Jarvis (James D’Arcy). Their photos from the set are… well, see for yourself.

@HayleyAtwell using the Howard stark Hoover which blow dries whilst feeding the newborn.The product failed in the US pic.twitter.com/jzJIzAN7pS

We almost feel bad for whichever director has to corral these nerds into doing some work.

In the best possible way, Hayley Atwell seems like kind of a troll. When she’s not pranking her co-stars, she’s tricking her English boyfriend into thinking Thanksgiving involves a talking stick.

The rest of the time, she’s participating in the Marvel actor tradition of seeming suspiciously similar to her character. First there was all the punching, and then there’s things like this: 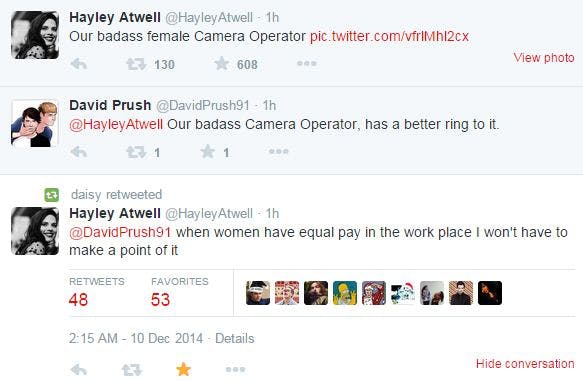 We could share dozens more examples, but the point should be clear by now: If you’re not following Hayley Atwell on Twitter, you should fix that. After Agent Carter premieres next month, we predict that she’s going to become a pretty big deal.