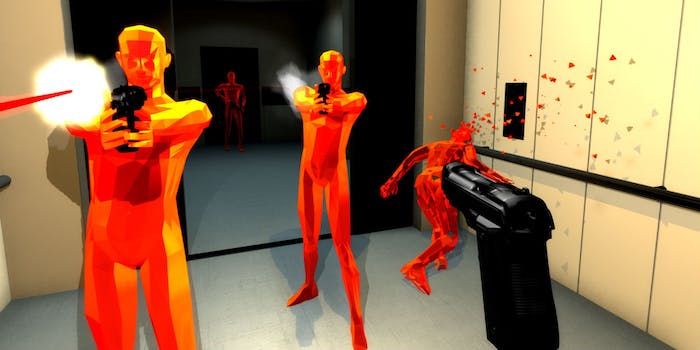 You next favorite game is just waiting to be created.

If you’re bored with first-person shooter games and think there’s no room for creativity in the genre, an upcoming game development event may prove you wrong.

The 7 Day First Person Shooter challenge (7DFPS) is a game jam (read: a bunch of game developers throwing ideas at the wall and prototyping them at a frenetic pace), that tasks participants with making a FPS game. 7DFPS is being organized this year by Jan Willem Nijman, the lead programmer and one half of the indie development studio Vlambeer.

7DFPS is an international event, which opens the door to a huge number of participants (280 projects were completed in the 2014 iteration). SUPERHOT, one of last year’s high-profile entries, demonstrates the innovation engendered by the 7 Day First Person Shooter challenge. SUPERHOT is a FPS where time only moves when the player moves, which subverts the game from a kinesthetic, reflex-based exercise into an almost sedate, strategy-based game.

SUPERHOT was funded via Kickstarter in June, raising almost three times the goal. You can play the prototype here if you install the free Unity media player.

Notch, the creator of Minecraft got in on 7DFPS last year with a zombie shooter called Shambles, which you can also play for free with the Unity player. It’s good for a brief, punishing shooter break at your desk during the workday.