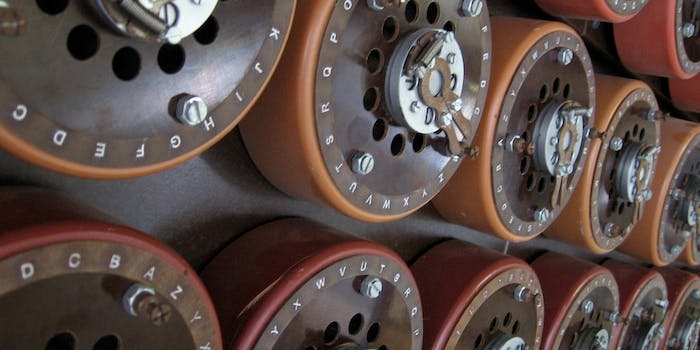 The NSA is tweeting out cryptic messages to hire new codebreakers

Can you solve the puzzle?

The National Security Agency has kicked off the week by throwing down the cryptographic gauntlet to the entire Internet.

Some suggested that the NSA might be drunk. We reached out to the agency and learned that the tweet is part of a monthlong campaign of coded tweets that will “explore careers essential to protecting our nation.”

“NSA is known as the code makers and code breakers,” NSA spokeswoman Marci Green Miller told the Daily Dot in an email. “As part of our recruitment efforts to attract the best and the brightest, we will post mission related coded Tweets on Mondays in the month of May.”

While posting coded messages on Twitter is a new recruitment strategy for the agency, NSA officials have been known to attend hacker conferences in attempt to cajole new talent.

The Internet loves a challenge, so you can bet people are working on this already. We’ll update you if and when this mystery begins to unravel.

Update: Using the code-breaking website Quipqiup, we cracked the NSA’s message. Most of the message was actually included in the comments made by the agency spokesperson. Go figure.

(At this point, you should stop reading if you want to solve this puzzle by yourself.)

The solution, which involves a simple letter substitution, is:

Want to know what it takes to work at NSA? Check back each Monday in May as we explore career essentials to protect our nation.

Kind of anticlimactic. Hopefully, we’ll get something a bit more exciting next week. Until then, keep your friends close and your metadata closer.

Photo by Marcin Wichary/Flickr (CC BY 2.0)