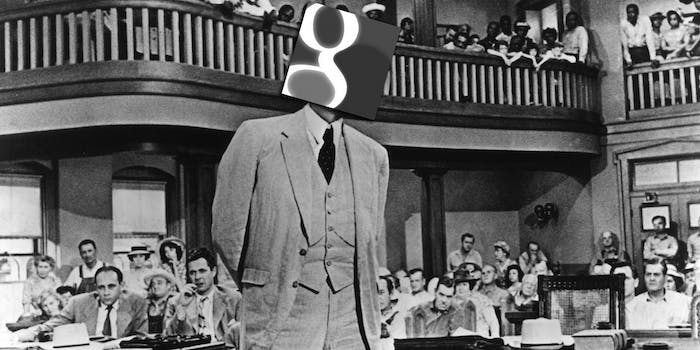 ... while neither confirming nor denying that the NSA has ever requested users' data.

Google, whose customers are reeling from revelations that the NSA regularly taps the company for customers’ communications, is fighting back in court.

It’s a bit ironic, considering that by definition, the secret orders for information, authorized by the Foreign Intelligence Surveillance Act (FISA), come with the legal instruction not to mention those orders. But Google has filed a motion asking for permission to release aggregate data of FISA orders. It even gets snarky about the idea of secret courts, mentioning in its first footnote that “Nothing in this Motion is intended to confirm or deny that Google has received any order or orders issued by this Court.”

Google has previously insisted to the public that, despite the claims the NSA made in a leaked internal document, the government’s PRISM spying program doesn’t actually give it access to the company’s servers. To that end, it has publicly called on the NSA for permission to release statistics, and has criticized Facebook and Microsoft for publishing figures that lump FISA orders in with other government requests for data.

In the days since PRISM became public knowledge, search engine Duck Duck Go—which prides itself on being a privacy-respecting alternative to Google, since it doesn’t store user data—has seen its traffic skyrocket.

David Drummond, Google’s chief legal officer, insisted in a Q&A session on the Guardian Wednesday that the company responded to FISA requests, but didn’t permit mass surveillance of its users:

I’m not sure I can say this more clearly: we’re not in cahoots with the NSA and there’s is no government program that Google participates in that allows the kind of access that the media originally reported. Note that I say “originally” because you’ll see that many of those original sources corrected their articles after it became clear that the PRISM slides were not accurate. Now, what does happen is that we get specific requests from the government for user data. We review each of those requests and push back when the request is overly broad or doesn’t follow the correct process. There is no free-for-all, no direct access, no indirect access, no back door, no drop box.

The U.S. hasn’t denied the existence of PRISM. However, it has denied that intelligence agencies tap directly into Google’s servers. And government officials have refused to call the program by that name PRISM, instead referring to it as a “702 tool,” a reference to the portion of FISA that allows those secret court orders.