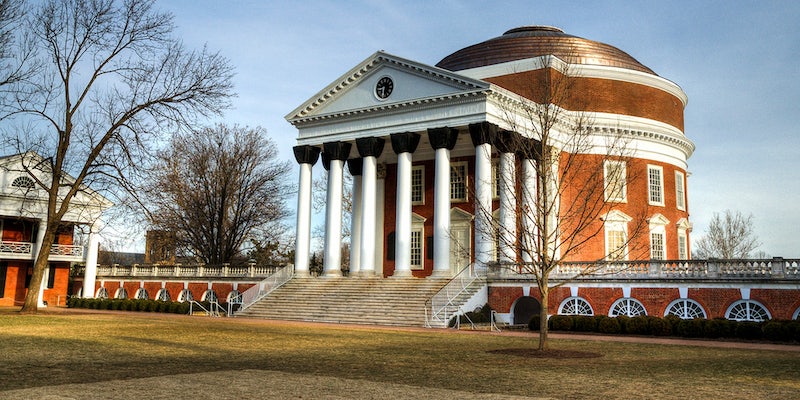 He says more information is coming.

Charles Johnson, a conservative writer with the site Got News, claims to have revealed the full identity and photograph of “Jackie,” the woman who told Rolling Stone about her alleged gang rape at a fraternity on the University of Virginia campus in 2012.

Hey @Twitter @Support, try putting those new policies into use: doxxing & extortion by Chuck C Johnson. Shut him down pic.twitter.com/t3KVFfO7WV

The story, and its subsequent unraveling, have caused a media firestorm in the past few weeks. Rolling Stone—who included Jackie in the article even after she allegedly asked to be excluded—recently said they’d found “discrepancies” in the story and a Washington Post article was “unable to corroborate” the original account from Jackie. The story is still being investigated by multiple media outlets.

Earlier today on Twitter, Johnson gave the woman an ultimatum, saying she has “until later tonight to tell the truth and then I’m going to start revealing everything about her past,” including, he says, that she “has made up other rape claims in the past.”

Johnson, who has been bullishly attempting to make a career out of being as outrageous on social media as possible while building his own news startup, broke normal media protocol—i.e., not publishing a potential rape victim’s name—because he believes the entire story was a deliberate and malicious hoax.

He hasn’t elaborated on his claims but he is reveling in the attention he’s currently receiving by asking for donations and support.

This is the worst possible outcome of the Rolling Stone mess. @ChuckCJohnson has doxxed the woman who came forward with rape allegations.

The ongoing hail of criticism that has rained down on Rolling Stone journalist Sabrina Rubin Erdely has widely been viewed as completely justified.

“If nothing else, what the UVA story has taught me is that the media (particularly the left-leaning media) is doing rape victims an enormous disservice by not questioning them,” Daily Dot writer E.J. Dickson wrote on Friday. “As it stands now, the media is not only not questioning female sexual assault victims’ stories, they’re shouting down any outside attempts to do so. If nothing else, we should be putting more pressure on these stories: Not because we don’t believe them, but because we don’t want to run the risk of them not being true, and of future victims not being believed.”

On the other hand, publishing identifying information about a potential rape victim is garnering an enormous amount of criticism, ranging from mainstream media to both liberal and conservative pundits alike.

“Given that unverified details ended up fracturing the story, it’s completely irresponsible of Johnson to do the exact same thing and publish an unconfirmed name while the story is still being investigated,” Isha Aran wrote at Jezebel. “Most importantly, publishing the real name is fucking dangerous. If Johnson is correct, he has put a young woman who has already been subjected to hatred and threats at even more risk.”

There have been numerous calls to get Johnson banned from Twitter on the the grounds that doxxing is against site rules.

Update, 2:24pm: Mediaite has a nice summation of Johnson’s part in other stories involving dubious info. Johnson claimed Michael Brown had a juvenile arrest record, and was suspended from Twitter after publishing the personal info of two Dallas nurses under quarantine for Ebola.