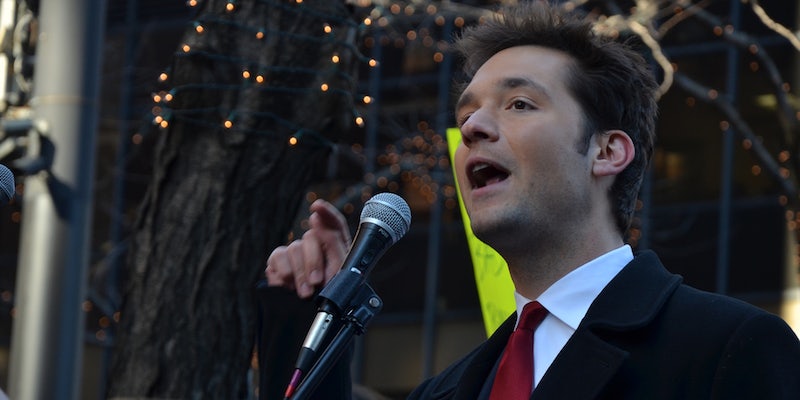 Alexis Ohanian is sick and tired of the FCC's Internet-infringing antics.

Reddit cofounder and Internet rights champion Alexis Ohanian is brandishing his sword once more, this time against the Federal Communications Commission (FCC).

Ohanian is raising $20,000 on Crowdtilt for a billboard advertisement outside the FCC’s Washington, D.C. offices to protest against a forthcoming net neutrality proposal that critics say could raise Internet prices and, according to Ohanian, enable “discrimination across services that make use of the net, and makes it harder to access the stuff that we access each day today (from video streaming to file saving and sharing).”

On May 15, the FCC will decide whether to reinstate net neutrality regulations that will allow Internet service providers, like Comcast, to charge Internet-based companies, like Netflix, for a so-called broadband “fast lane” to better reach customers. While these fast lanes already exist in some instances, critics believe the FCC’s proposal could lead to widespread discrimination, degradated service, and potentially outright censorship online.

Net neutrality has a variety of definitions, but generally centers on the principle that all Internet traffic should be treated equally, without discrimination or special treatment for particular types of data.

So far, Ohanian has raised more than $9,000 of his $20,000 goal, with 16 days left to go. Ohanian says that if the CrowdTilt campaign exceeds $20,000 in donations, the money would be used to buy ads in the New York Times and the Washington Post.

Ohanian placed advertisements in both newspapers in 2012, when he rallied hundreds of Web properties—including Wikipedia and Craigslist—to protest against the Stop Online Piracy Act (SOPA) and PROTECT IP Act (PIPA), two pieces of legislation that threatened Internet freedom.

The 2012 protest resulted in both pieces of legislations being pulled from the congressional agenda.

Photo by selfagency/Flickr (CC BY SA 2.0)