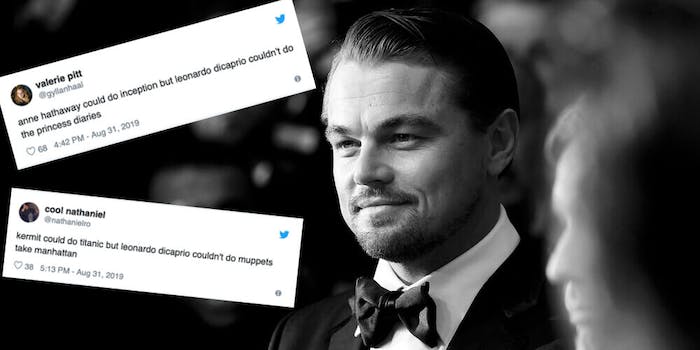 This new Twitter meme proves which actors really have range

'Lena Headey could do 99% of roles but 99% of actors couldn’t do Cersei Lannister.'

A new meme is sweeping the internet and exposing which actors have the most range.

The “could do but couldn’t do” meme began circulating on Twitter on Aug. 31, apparently aiming to reveal the lack of credit female actors get in Hollywood. Within days, the meme had expanded from one or two snarky posts to hundreds. Now people all over the web are using the meme’s simple format to expose the range many actresses have, and to poke fun at their male colleagues in the process.

“Could do but couldn’t do” meme

Most of the memes outline real film roles, played by men, that people believe women could have played just as well. In the second half of the meme, they turn it around and note roles that the women have played that the men couldn’t pull off. “Anne Hathaway could do Fight Club but Brad Pitt couldn’t do Princess Diaries,” one user wrote.

A surprising number of the memes took aim at Leonardo DiCaprio. Perhaps due to the 44-year-old’s notorious acting chops, he was a common inclusion in the internet’s newest meme. “Taylor Swfit (sic) could do The Wolf of Wall Street but Leonardo DiCaprio couldn’t do the Reputation stadium tour,” Twitter user @dykemilk wrote.

Eventually, as memes are wont to do, it evolved. The meme started encompassing musicians as well as actors, taking aim at everyone from Beethoven to the Beatles. “Britney Spears could do ‘Hey Jude’ but the Beatles couldn’t do ‘Baby One More Time,'” one user wrote.

sophie ellis bextor could do sonata no.32; op.111 in c minor, but beethoven couldn't do heartbreak (make me a dancer)

From there, the meme spiraled into goofy comparisons and jabs at actors, artists and everyone in between. Posts like “Robert Pattinson could do the Bible but Jesus couldn’t do ‘Twilight,'” gradually overtook the original meme.