Yesterday, President Donald Trump ordered a drone strike in Baghdad that targeted and killed Iranian external forces commander Qassem Soleimani. Soleimani, a major general in the Islamic Revolutionary Guard Corps, commanded the Quds forces for more than two decades. He was considered by many to be the second-most powerful person in Iran.

Not long after news of Soleimani’s death broke, a clip from Trump’s Sept. 3, 2015 appearance on the Hugh Hewitt Show started making the rounds on Twitter. In it, Trump comes across as unfamiliar with both Soleimani and the Quds.

Vote Vets, which unearthed the clip, wrote, “Trump didn’t know who Soleimani was, or the Quds, in 2015. Unclear how much he understands now, or if he even has a strategy when it comes to Iran.”

Trump didn't know who Soleimani was, or the Quds, in 2015. Unclear how much he understands now, or if he even has a strategy when it comes to Iran. pic.twitter.com/Hah9YSRNVr

In the clip, Hewitt begins by asking Trump if he’s “familiar with General Soleimani.”

Trump responds with a drawn-out “yes,” then apparently concedes his ignorance by asking Hewitt to “give me a little, go ahead, tell me.”

Hewitt explains that Soleimani commands the Quds, and starts to ask about Trump’s expectations of him, until Trump interrupts, “I think the Kurds, by the way, they have been horribly mistreated by us.”

“Do you expect his behavior to change—” Hewitt begins. Trump interrupts him again, “Oh, I thought you said Kurds. Kurds.”

In a transcript available on the show’s website, Hewitt goes on to explain who Soleimani is in greater detail. Then he asks whether Trump believes Soleimani’s behavior would change as a result of the Iran nuclear deal. 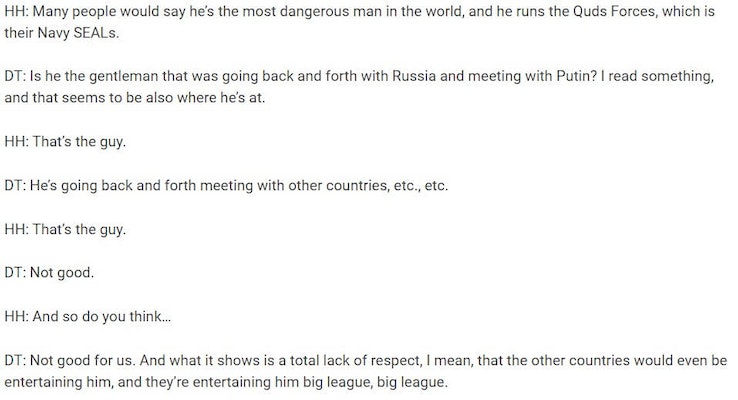 Trump announced his presidential bid three months before the episode.

People were appalled, though not particularly surprised, by the unearthed clip, which provided an opportunity to criticize Trump’s foreign policy record.

“Trump wanted to kill someone big to make him look like Obama when he took out Bin Laden. Now we go full steam into WWIII which Trump hopes will get him re-elected,” @HermeticQabalah commented.

This was so telling. Hewitt isn’t dumb. When he’s alone, what do you think he really believes about Trump?

Caught that right away. He’s just a completely incompetent human, 100% opportunist. A sociopathic narcissist who will sacrifice as many American soldiers as it takes to win an election.

Being illogical is not a surprised anymore.

This sums up Trump's foreign policy chops AND his double-dealing nature in mere seconds…not only did he try to bs his knowledge of Soleimani; he began to give a shoutout to the Kurds in this very clip.

Iran Supreme Leader Ayatollah Khamenei has called for three days of public mourning for Soleimani, after which Iran vows it will seek “harsh revenge.”