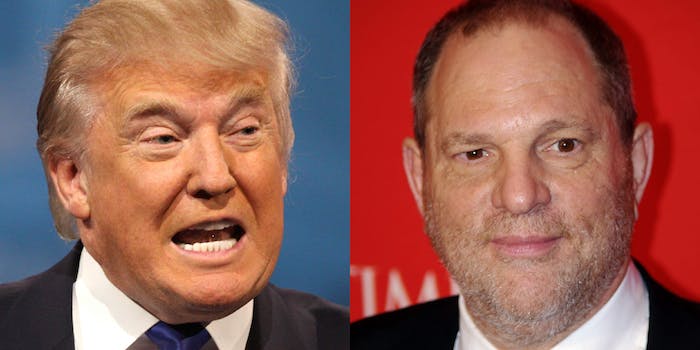 Both Weinstein and Trump stand accused of sexual misconduct. But Republicans are reacting very differently.

Harvey Weinstein and Donald Trump, powerful men entrenched in the worlds of entertainment and politics, both stand accused of sexually harassing and abusing women. The difference? One has been cast aside as so toxic that not even his money is good. The other is president of the United States.

Sen. Patrick Leahy (D-Vt.) was the first to scrub Weinstein’s donation from his 2016 re-election coffers, telling the Daily Beast he would donate the $5,600 Weinstein contributed to his campaign to the Change the Story Initiative at the Women’s Fund of the Vermont Community Foundation. Sens. Martin Heinrich (D-N.M.), Richard Blumenthal (D-Conn.), and Elizabeth Warren (D-Mass.) soon followed suit.

Smelling blood in the water, the Republican National Committee (RNC) called on every Democrat who received donations from Weinstein to rid themselves of his “dirty money.”

“During three-decades-worth of sexual harassment allegations, Harvey Weinstein lined the pockets of Democrats to the tune of three-quarters of a million dollars,” RNC Chairwoman Ronna McDaniel said in a statement. “If Democrats and the DNC truly stand up for women like they say they do, then returning this dirty money should be a no-brainer.”

The RNC then listed the amounts Weinstein has contributed to various Democratic politicians, as well as the $246,290 he donated to the Democratic National Committee (DNC). In total, Weinstein has given $1.4 million to federal political entities since 1990, Variety reports.

McDaniel is right: Condemning Weinstein is a no-brainer. To continue to associate with him would fly in the face of women’s rights and basic decency. So, why don’t the same standards hold true for Trump?

Reasonable people can argue that Democrats should no longer associate with Weinstein, nor agree to benefit from his high-dollar fundraisers or accept his donations. Given the reports that Weinstein’s abusive behavior was an “open secret” among many who knew him, it’s logical to assume that some, if not most, of the politicians who directly benefited from his political giving chose to ignore the “rumors” of his sleazy ways.

What is neither reasonable nor logical is to argue that Weinstein’s alleged behavior is any less despicable than Trump’s. Remember, not only did Trump brag on tape about his ability to sexually assault women with impunity because he’s famous—dozens of women have accused him of sexual harassment or assault. Save a vocal contingent #NeverTrump conservatives, voters elected him to the highest office in the land. The Republican establishment expressed its digust—then supported him and continues to support him now. Sean Spicer, who on Friday morning complained that the print edition of the Washington Post did not contain a story about Weinstein, served as Trump’s press secretary.

Not a single mention of big Democrat donor #HarveyWeinstein in hard copy of @washingtonpost pic.twitter.com/qfktuhSfRF

Some may argue that Weinstein’s fresh scandal is more comparable to that of Roger Ailes, the Fox News mastermind who arguably did more for the Republican Party than Weinstein ever did—could ever do—for Democrats. Ailes, who died in May, resigned as head of Fox News in July 2016 amid allegations of sexual harassment against female colleagues. Bill O’Reilly, once the leading star of Fox News, resigned in April while facing equally damning accusations.

The theme is obvious: Rich and powerful men often abuse their wealth and power by sexually violating women, often without repercussion for years or decades. The accusations against Weinstein have now presented American politicians with an opportunity to condemn anyone who uses their time on this earth to turn other people into victims. Republicans have already failed this test. Will Democrats fair any better?