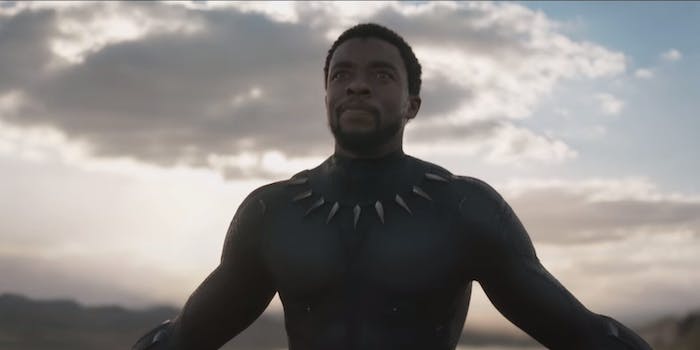 Wakanda is a free trade partner of the US, according to Trump administration

'Trump made America so great that even fictitious superhero countries wanna do business with us.'

The Trump administration listed the fictional East African country of Wakanda as a free trade partner of the United States, NBC News recently revealed. The imaginary country was removed from the United States Department of Agriculture’s Agricultural Tariff Tracker on Wednesday, but not before its presence caught the attention of reporters.

The Black Panther’s fictitious home in the Marvel Universe was listed alongside 10 real-world trade partners. These included Columbia, El Salvador, and Peru. The country was being used to “test the system,” according to the USDA. Its continued presence on the site was chalked up to a minor error.

“Over the past few weeks, the Foreign Agricultural Service staff who maintain the Tariff Tracker have been using test files to ensure that the system is running properly,” a USDA spokesperson said in a statement. “The Wakanda information should have been removed after testing and has now been taken down.”

Wakanda appears to have been on the USDA website since June, however, according to NBC News.

Wakanda is listed as a US free trade partner on the USDA website?? pic.twitter.com/xcq1OFTIPh

fwiw, the US would no doubt try to liberalize Wakanda's markets and flood it with cheap subsidized corn

Hundreds of data inputs existed for Wakanda before the imaginary country was removed from the site.

“Different commodity groups offered on drop-down menus range from fresh vegetables and unroasted coffee beans to essential oils and livestock,” NBC News reported Wednesday. “Each commodity group had separate entries that provide details on the tariffs for each product. Yellow potatoes had to maintain a ‘0.5 cent/kg’ base rate when shipped in from the fictional East African nation, while frozen Chinese water chestnuts were tariff-free if the U.S. decided to import them from Wakanda. Cows were also tariff-free.”

NBC was kind enough to reach out to Marvel about the apparent trade agreement but received no response. People quickly jumped on the amusing discovery, making jokes about the trade deal.

“So do we, or do we not have free trade with Wakanda,” Christopher Heath wrote. “Also where are things at on negotiations with Agrabah?”

So do we, or do we not have free trade with Wakanda? Also where are things at on negotiations with Agrabah? https://t.co/g18e8WtXWF

He was far from the only person to seize the opportunity to poke fun at the Trump administration.

Trump made America so great that even fictitious super hero countries wanna do business with us. pic.twitter.com/MKvdG8LMqU

I completely disagree. Not forcing them to pay tariffs undermines US companies like Stark Industries who end up having to cut innovation or raise prices on consumers. And you know how important Stark is to many industries from weaponry to clean energy. No free trade for Wakanda!

I call for the @USDA to re-engage the Kingdom of Wakanda in trade talks immediately and provide the necessary exception from the trade tariffs. I understand that they have been isolationist, but King T'Challa has moved away from the Wakanda First agenda.