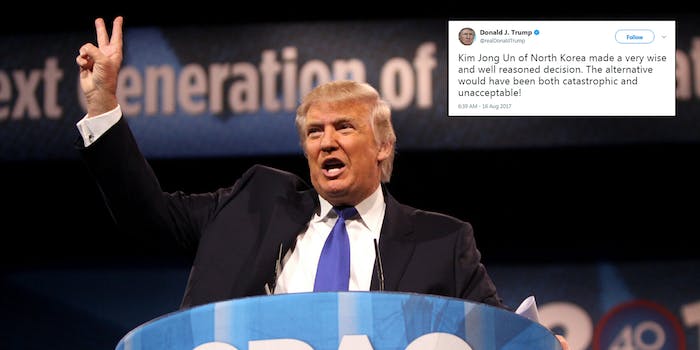 Trump congratulates North Korea on decision to not bomb Guam

One less thing to worry about.

President Donald Trump took a Twitter victory lap in his ongoing war of words with North Korea on Wednesday morning, seemingly ratcheting down tensions that have been raised for over a week between the United States and the reclusive country.

Trump tweeted that North Korean leader Kim Jong-un made a “very wise” decision, however, he did not specify that decision was. The president seems likely to be talking about reports that North Korea had backed down from its threat of launching a missile attack against Guam, an American territory with strategic military value.

“Kim Jong Un of North Korea made a very wise and well-reasoned decision. The alternative would have been both catastrophic and unacceptable!” Trump tweeted.

Kim Jong Un of North Korea made a very wise and well reasoned decision. The alternative would have been both catastrophic and unacceptable!

Earlier this week, North Korea decided not to engage in a missile strike—a threat that came as rhetoric between the country and Trump bounced back and forth with increasing intensity for more than a week.

During the escalating threats, Trump said the U.S. military was “locked and loaded” and would attack North Korea with “fire and fury” if the North continued its provocations.

As hysteria grew, Guam even sent out a tip-sheet to residents telling them what to do if a missile attack occurred on the small island.