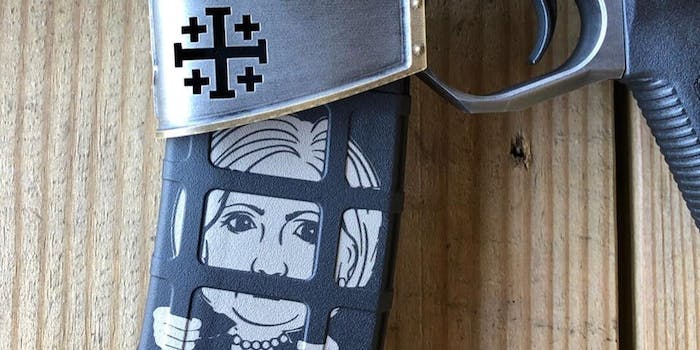 The customized magazine is being sold for $20 online.

This weekend was already fraught with news, the world watching apocalyptic bushfires in Australia and President Donald Trump overseeing the killing of an instrumental leader in the Middle East.

But Donald Trump Jr., far removed from his father’s decisions and their consequences, was busy playing with a new rifle and showing off the magazine—customized with an imprint of Hillary Clinton behind bars.

He posted the photo on Instagram over the weekend, thanking the designers for “adding a little extra awesome to my AR and that mag.”

The magazine shows a cartoon imprint of Hillary Clinton clutching the bars of a prison cell.

The post generated a lot of “lock her up” and pro-gun comments by people who cheered Trump Jr. on:

“Greatest mag of all time!!!” wrote one user.

“lock her up n load,” wrote another.

Spike’s Tactical, which sells firearms and parts, was tagged as one of the designers in the post. On their own page, they advertised the magazine. “Head over to our website and get yours,” they wrote in a post. “They’re going fast.”

On their website, it was available for $20 on Monday morning.

On Twitter, however, many expressed their disgust with a move this petty, even by Trump Jr.’s standard:

WTF…does he imagine he's killing Hillary every time he shoots one of God's endangered animals? The whole damned family is sicker than any walking around person should be.

Imagine being that guy. I actually feel bad for him sometimes. I mean…his reality is sooooo fuuuucked. But to him, it’s normal.

And many considered it an open threat:

Isn’t it illegal and a threat to national security threaten the life of a First Lady??? I mean won’t secret service have to be on high alert for this instigator of threats against any family member of a former POTUS? So dangerous!!

This is publicly inciting violence and even murder against a public figure.

THIS CANNOT BE IGNORED.

NO ONE IS ABOVE THE LAW.

Is that supposed to be a credible threat of violence?

Some expressed what we’re all thinking. It’s been three years and the Trumps just can’t seem to get over Clinton:

They’re so obsessed with her

Such a "he man" the way he feels all threatened by a smart woman. Does Hillary live rent free in every Trump boy's head?

The Clinton imagery is also masking some other concerning features on the gun—namely, the Jerusalem Cross and the word “Crusader” etched on the gun.

The Crusaders/Jerusalem cross is a symbol of Christian dominance around the world and the timing of posing with “crusader” on a rifle concerned many, given fears of escalating tensions with the Middle East following the recent killing of Qassem Soleimani.

It also was adored by Anders Breivik, who used the iconography in advance of a shooting in Norway where he killed 73.

Donald Trump Jr. picks TODAY to post an image of his assault rifle complete with a Crusader's Cross etched into it.

The Crusader's Cross, aka 'Jerusalem Cross' is associated with the 12th-century crusader state known as the Latin Kingdom of Jerusalem. /ht @SouthEastARA @RVAwonk pic.twitter.com/XoVmaJpXVa

This isn't "triggering the libs" – it's stochastic terrorism.

Anders Breivik posed like this too, and he also loved his Crusader's Cross imagery.

Right?? Alllllll the ‘headlines’ are about the Hillary thing and not the alt-Reich iconography, the actual worrying part

Instagram’s Community Guidelines say the platform doesn’t allow “content that contains credible threats or hate speech, content that targets private individuals to degrade or shame them” but it’s not clear if the platform is taking any action against this post, which has been there for more than 24 hours.

The Daily Dot has reached out to Instagram and will update the report if they respond.