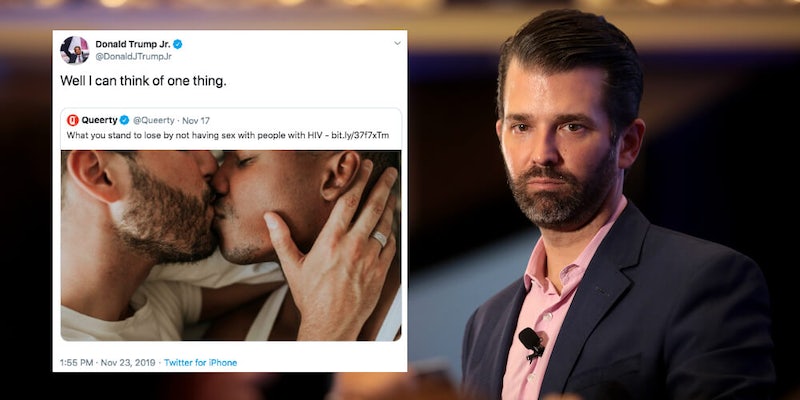 'This ignorant drivel is all you have to offer?'

On Saturday, one of the president‘s adult sons tweeted a single line in response to an article meant to bring awareness to the public about HIV, and he is being dragged for it.

“Well I can think of one thing,” Donald Trump Jr. wrote in response to a news article, titled “What you stand to lose by not having sex with people with HIV.”

It is understood that the one thing  Trump Jr. is referring to losing is your life. Many on Twitter found his response to be insensitive, uneducated, and adding to the deeply rooted stigma attached to those living with the virus.

“Your comment is 100% part of the problem by strengthening Stigma which the entire world, the entire world, is rallying to destroy because it is literally possible, within our lifetime, to end HIV/AIDS. This ignorant drivel is all you have to offer? You’re on the wrong side,” actor Javier Muñoz tweeted in response to Trump Jr.

Your comment is 100% part of the problem by strengthening Stigma which the entire world, the entire world, is rallying to destroy because it is literally possible, within our lifetime, to end HIV/AIDS. This ignorant drivel is all you have to offer? You’re on the wrong side.

Another Twitter user wrote that it was “deplorable” and attached a link to an article addressing how the stigma of living with HIV has increased suicide rates among men.

For many that share Trump Jr.’s opinion, they are simply ignoring the blatant facts that combat this very dangerous bias. As the Independent reports, “HIV is not the same thing as AIDS, which develops when the HIV virus has gone untreated and reaches its final stages.. And with proper medical treatment the vast majority of HIV positive people reach healthy life expectancies and never contract AIDS.”

Furthermore, Medical News Today has published articles on advances in medicine that have drastically reduced the chances of a treated person transmitting HIV. Reports state that antiviral therapy can now make it possible for a person living with HIV to have an undetectable viral load that is both undetectable and untransmittable. In layman’s terms, a person having sex with someone who is being treated for HIV will not contract the virus.

HIV advocates and educators have urged Trump Jr. to use his vast platform of over 4 million followers to properly educate and reduce the spread of misinformation.

Hopefully, his tweet will bring additional awareness to this very serious issue in time for World AIDS/HIV day, which will be observed on Dec. 1.