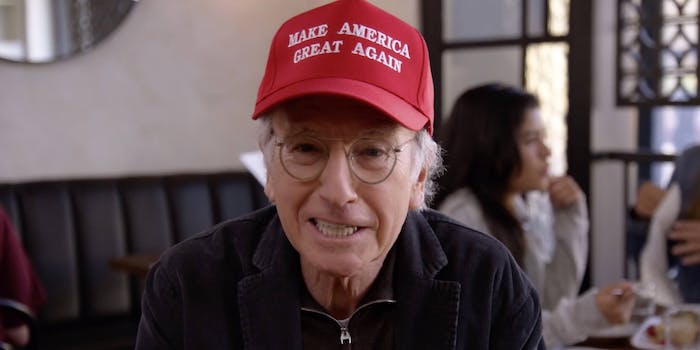 Trump tweets ‘Curb Your Enthusiasm’ clip. But did he miss the joke?

On Monday night, President Donald Trump tweeted a phone-recorded clip from the HBO series Curb Your Enthusiasm with the caption “TOUGH GUYS FOR TRUMP.”

The clip in question comes from the season 10 premiere of the show that aired in January and shows series creator and star Larry David donning a Make America Great Again hat. In the clip, David is driving his electric BMW and nearly accidentally collides with a man on a motorcycle. The man pulls up alongside David and starts to curse him out. “Motherfucker! What the fuck? What are you trying to do, man?” the biker yells as David pulls over his car. David proceeds to put on the MAGA hat, prompting an immediate tone switch and a “Just be more careful next time, OK?” from the biker.

Many were quick to point out that Trump seemingly missed the entire point of the punchline as David later describes the hat as “great people repellent” within the episode. When the premiere of the highly anticipated new season of Curb Your Enthusiasm showed David wearing the Make America Great Again hat, many were curious about David’s intentions for including it. In an interview, David was asked if he was afraid that the negative depiction of the MAGA hat would alienate Trump supporters who enjoyed the show. David replied, “Alienate yourselves. You have my blessing. I could give a fuck.”

I love Larry David with all my heart and soul. pic.twitter.com/OEDANgVLho

David’s pick for Democratic nominee is unknown. He reportedly donated $2,800 to Pete Buttigieg’s campaign in June. He has also previously joked that Sen. Bernie Sanders (I-Vt.) winning would be “great for the country, terrible for me,” as his comedic depiction of Sanders has made him busy. However, it’s pretty clear that the admiration between Trump and David is pretty one-sided. The tweet is still up with over 176,000 likes and 44,000 retweets.